Chinese New Year festivities include the incredible spectacle of Dragon Boat racing, a colourful race where crews of 20 sprint for about 90 seconds in a blur of colour, beating drums and dragon figure heads. This year free to air TV station SBS, the media partner for the event, entered a crew of their own. And it just so happened that Mrs Fat Paddler, as an employee of SBS, was included in this crew. 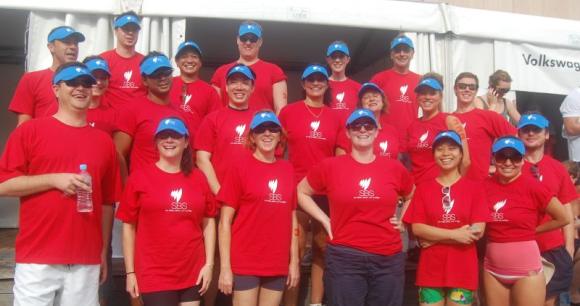 SBS Paddlers - elite athletes and feared by all other dragon boat crews...

A quick look at their pre-race session told me we were in for quite a spectacle. With two practice sessions under their belts, they were primed and ready to go. Kind of. Then their warm-up session topped it off with its chaotic yet enthusiastic series of movements, which all seemed somewhat reminiscent of float dancers from the prior evening’s Mardi Gras. 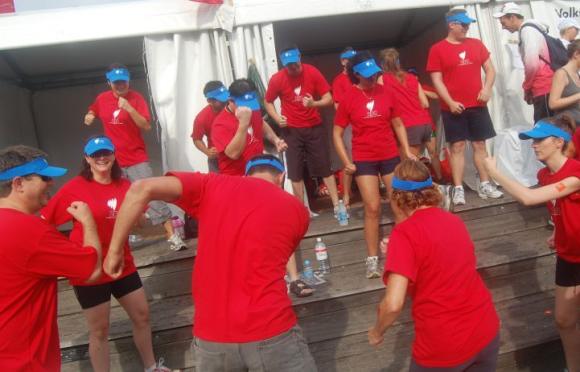 The final stretches involved a dance routine.. "Do the Hustle!"

Finally the team scrambled off to the marshalling area to get set for their first race of the day, with their crowds of supporters lining the edges of Darling Harbour eagerly awaiting SBS’ first appearance on the water. And then it started, with the six crews paddling hard in the distance, heading directly for the crowds. The SBS paddlers looked great in their red shirts and blue visors, but their paddling hadn’t quite come together in time for the first race. In fact the waves of paddles moving out of time looked like a drunk millipede flailing it’s legs in alternating waves.

Paddles perfectly out of time!

So in their first round, the SBS team came in a clear sixth… out of six crews! But their first outing had taught them valuable lessons and the team returned knowing what they had to do for the next race to improve their standings.

In Round 2 a completely different crew emerged, and to the cheers of their supporters, could be seen actually paddling in unison. In fact the team was paddling so well, it appeared they were starting to pass other crews!

SBS now a paddling machine, eating up their opposition

Flying into the finish line, the crew realised they’d moved up from 6th to 4th. The mere fact that they were no longer the worst team made them ecstatic, the team throwing their arms and paddles into the air with a gutteral cry of victory! 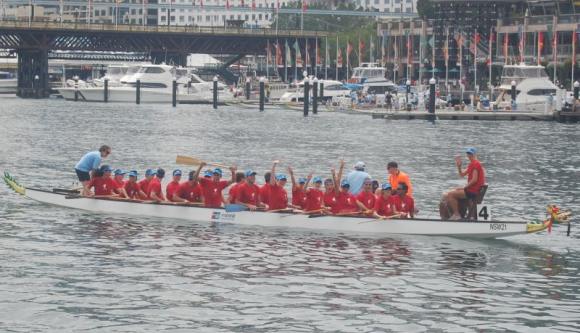 And with that, our time had come to an end with other committments leading us away. Mrs Fat Paddler handed her paddle to a subsitute paddler and we were off, safe in the knowledge that the team’s vast improvement would lead them to future victory!

UPDATE: A rumour is circulating that the SBS Paddlers smashed almost all of their opposition in the third round coming in SECOND. With that rate of improvement, winning the World Championship must be next on their “To Do” list! Cheers – FP

3 thoughts on “Dragon Boat Racing with the SBS Paddlers”