Pork Maki and Asahi – the Beginning 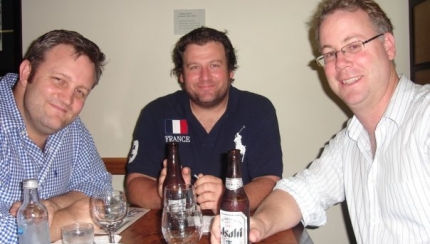 Three Fellas and a Plan.. after the pork & beer though...

It happened over Pork Maki and beer at a local Japanase restaurant.  Three middle-aged blokes discussed a plan to get fit.  A plan involving kayaks and a small marathon in October known as the Hawkesbury Classic.  Only 111kms, at night.  Too easy, pass the pork please.

The following weekend Bear (above left), Milo (above centre) and Rich (above right) met early at The Spit in Mosman. Bear with his brand new (ok, bought 2nd-hand from ebay) yellow/red plastic sit-on-top, Rich with his white kevlar Mirage sea kayak, and Milo on his hired yellow plastic sea kayak from the crew at Sydney Harbour Kayaks.

With a plan to paddle to Balmoral Beach and back (with a stop half way for coffee!) the boys struck out into the Harbour.  Looking strong until about half way, the crew struck problems.  Bear, struggling with chop and boat wash, tipped off his yak into the Harbour.  Milo, who had been struggling the entire time to stay afloat, kept going for the safety of Balmoral Beach (and subsequently fell out 30 metres away), whilst Rich stayed back to help Bear try to get back on his boat.

Long story short – Bear cannot stay in his boat, and after several attempts, undergoes the embarrassment of being towed by another kayaker back to the The Spit.  Rich, who has gone to help the now swearing and floundering Milo, falls out of his boat during the rescue attempt. Milo, after punching the boat in rage, abandons his hire craft and swims to shore. Rich is left to get back in his boat and tow Milos hire craft back to shore.

Needless to say not the impressive testosterone-filled start to the plan we had all expected. Still, after several shark sitings (and attacks) in recent weeks, the boys were just happy to have finished alive.  Next time, we promise to be better……

The lads looking more relaxed after making it to shore.

You win some, you lose some

One thought on “Pork Maki and Asahi – the Beginning”