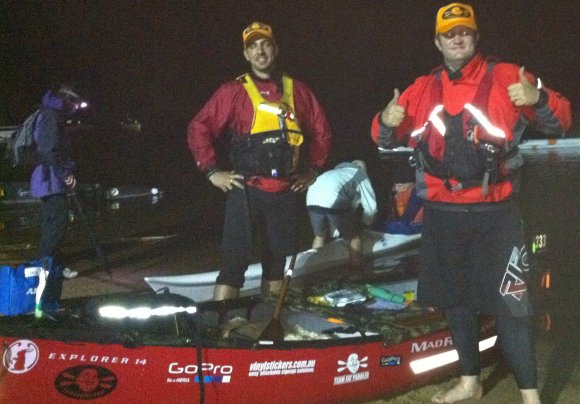 (Continued from Part 1) With bellies full of hot food, Gelo and I climbed back into the canoe and set off for Wisemans Ferry, some 33km down the river. Gelo, who’d struggled with the final kms of the previous leg, was now on fire after a good feed from Burnsie. It hadn’t had the same effect on me however, and I started to feel physically sore and tired. Old injuries were now starting to ache and despite the rocking music coming from our canoe, I went silent as I worked through the pain. I also remembered I had some Panadol on board, so I popped a couple and allowed the pain to dull a little.

We worked out that the tide had changed and was now surging towards us by the fact we hadn’t seen a checkpoint for well over an hour. We had a 7km ride between checkpoints and yet, depsite an hour and a half of paddling, we still hadn’t found it. As we battled the tides, the ominous clouds above us finally opened up and started to rain. We didn’t know it, but it wouldn’t stop until well over 14 hours later.

The battle against the tide continued for hours, exhausting both Gelo and I as we fought in our bloody big canoe against the surge. At midnight, we decided to stop for water and a stretch, and pulled over to a sandy bank to do so. Gelo was looking pretty tired after the 8 hours of paddling, and I could see that the enormity of the quest was now far more clear to him. 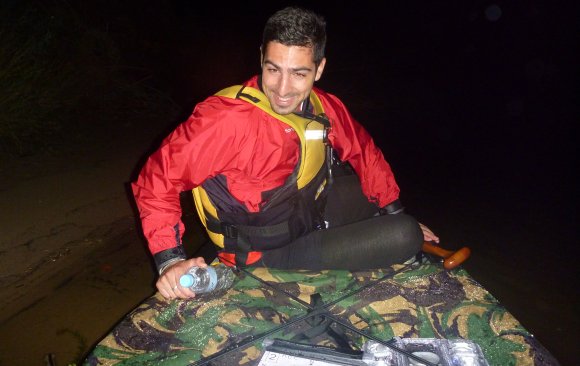 FP also looking pretty exhausted by all the paddling!

As we rested it looked like the last of the other paddlers went by and we resigned ourselves to being the last boat travelling up the river. As we set off again however we caught up with one of the SUP paddlers, bent over stretching and obviously feeling as knackered as we were. We checked if he was ok before paddling on, with him staying not far behind us for the remainder of the paddle to Wisemans.

The rain was now coming down heavily and we getting pretty annoyed by it. Between the never ending rain and the brutal tide, the night stretched on and on until close to 3am when we finally saw the flashing lights of Wiseman’s Ferry in the distance. A final burst of paddling and we pulled into the boat ramp and our waiting landcrew. 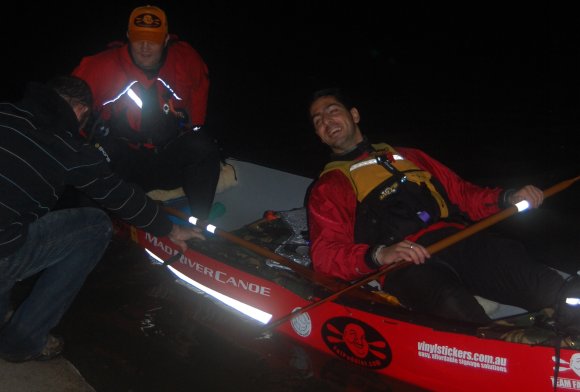 Burnsie was of course already busy, frying up a big plate of bacon ready for our Canadian Breakfast (pancakes, bacon and Maple syrup). As he prepared some hot drinks for us, Gelo and I wandered off to the physio tent for a quick shoulder massage. 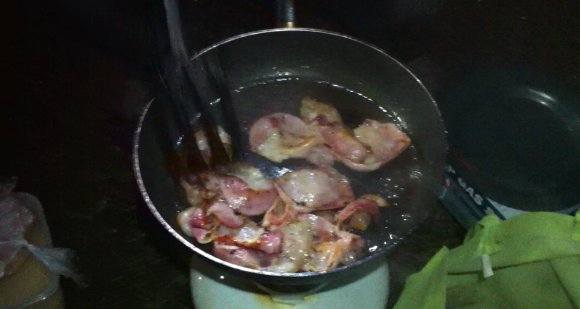 When we got there, with me first in line, we were greeted by a tall Scandinavian bloke, and a young cute American woman who clearly had a preference on who she wanted to massage. I begrudgingly took a hit for the team and picked the bloke, leaving the young lass to Gelo. Then as I was stretched and beaten senseless, I had to listen to the sickening small-talk being made by Gelo and his little girlie.

FP seemingly having his arm torn off at the shoulder...... 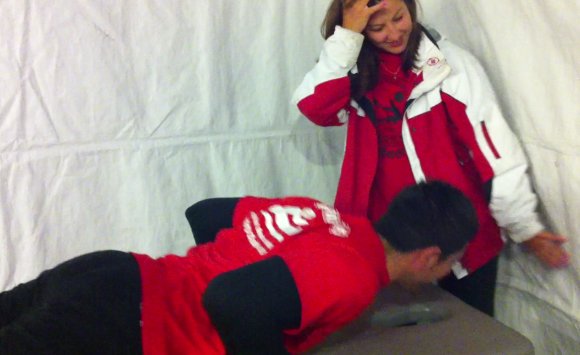 ...meanwhile Gelo shows off with a few push-ups for his cute masseuse!

When the massage was over for us both, we wandered back out to Burnsies diner, where we were handed our Canadian brekky. It’s hard to describe the joy of being handed something quite so delicious at 3am after 11 hours of paddling. Needless to say, it was very, very good!

When we finally finished our second round of pancakes, we made our way back to the waiting canoe, ready to take on the final 45kms to the end in the still pouring rain.  Our SUP mate was there packing up, having buggered his ankle and decided to pull out, and he wished us luck on the final leg of the race. With the help of the boys, we turned the music back up and climbed into the canoe.

And with a final goodbye to our team, we turned our canoe around and set off up the river, fuelled and ready for the final journey (to be continued).