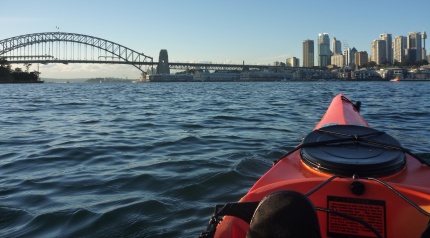 Paddling down the shipping lane to "The Coathanger", aka Sydney Harbour Bridge

I decided it was time for a test, a time to put the demons behind me, a time to get past the disasterous first paddle into Sydney Harbour. It was time to take on the shipping channel, the ocean swell, the harbour ferries and the speedboat cowboys of the main body of the Harbour.

I mapped out a route from Five Dock, between the peninsulas of Drummoyne and Balmain, out into the main channel of the Harbour and across to Milsons Point ie right up to the Sydney Harbour Bridge itself. 14 kms of choppy, dangerous paddle – this was going to be a real test!

Of course to negate the traffic-chop as much as possible I made sure I was on the water before 6.30am, setting off into the Harbour before the sun had yet peeked over the horizon. 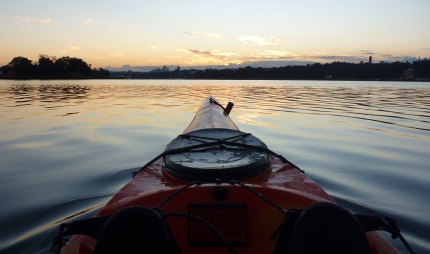 Setting off from Five Dock - glassy so far...

With 5kms before hitting the channel proper, this seems easier than expected. Until of course I got to the channel and noticed the ferries had started – queue choppy waters!  Fighting my way through the chop, I head off towards the relative protection of Blues Point (and Milsons Point beyond) with relatively no major issues.

Of course once there I get to experience the true grandeur of Sydney’s major landmarks, the Sydney Harbour Bridge and the Sydney Opera House. But admittedly I’m finding them hard to enjoy, because ferry chop is starting to broadside my kayak and it is becoming increasingly difficult to stay upright. 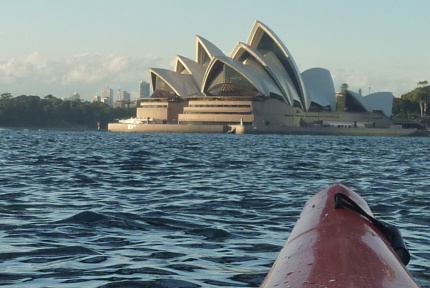 So after enjoying the sites I decide to head off back to Five Dock before the water traffic gets too great. After paddling a few minutes I came across another paddler using a Greenland Paddle. Now this is a great looking paddle, known for its ease of use over longer distances, so we stopped and had a chat about how it was to use.

And that was about the time that the first 4 foot wave hit my boat. A whole set of large waves, which I’m guessing had come off the larger of the Manly Ferries, came smashing through, threatening to topple me off the yak. Turning against the waves, I paddled hard trying to surf them, but struggled to keep the nose from spearing into the Harbour as the waves washed over the back and sides of the kayak. And as the kayak filled further, the more unstable it became. And just as I thought I was about to topple in, the waves stopped.

So a quick pump out of the water and things are seemingly fine. Except the deafening roar of a tankers fog horn which breaks the peace of the Harbour, and looking back I see why – I am right in the shipping lane in the tankers way and it’s bearing down fast. 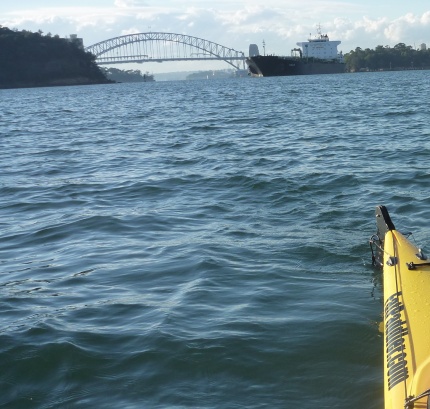 So paddle rate up & I have to sprint a km to get out the way of the rapidly approaching tanker, before turning the corner at Birchgrove for the paddle back home. And just when I think the hard part is over, I find myself paddling through a rowing regatta. So another kilometre detour gets me finally back to Five Dock and an end to another paddle.

Harbour conquered! (until next time no doubt!)

6 thoughts on “Sydney Harbour – like paddling in a washine machine”