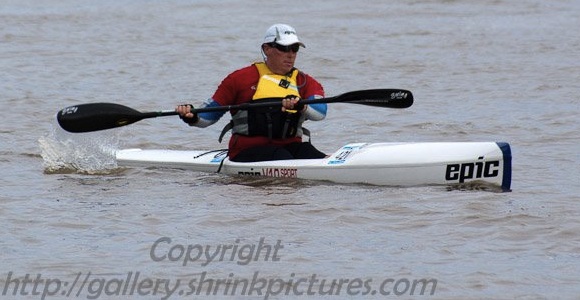 In South Australia each year a two day marathon event is held on the great Murray River, with competitors racing 20km each day. One of our SA-based Team Fat Paddler contingent Brian Partridge decided to dust off his Epic V10S surfski and give this year’s Back2Back event a run. Here’s his race report from this unique event. Cheers, FP

After making the painful decision to pull out from the TFP Mauritius trip this year, I decided to do a few distance races locally. Namely the Back2Back and the RPM 100 ( Riverland Paddling Marathon), both run by the Marathon Canoe Club of SA.

I flew home from my shift in north west WA on the Monday night, arriving home on Tuesday morning at 8am, after seeing Perth and Melbourne airports along the way. The plan was to get straight onto the water in my epic V10S and do about 10km a day in the lead up, but just like most well laid plans, it didn’t eventuate. I slept most of Tuesday, then picked up a new SUP from Steve Dalton at Paddle Sports SA and spent a few days with the kids test driving the new board. So now with one day to go, and no training in before the two 21km days, what does one do? Watch beavis and butthead all day while the kids are at school!

The races were to be held at the Murray Bridge Sailing Club grounds. By the time Saturday morning arrived, it was myself and my 13yo son, Judson, making the trip. We arrived onsite at about 12.30, unpacked the car and boat and got all the rego details sorted. I had about an hour before briefing and race start, and took this time to re-inspect all my gear. Foot pedal correct length, paddle set right, 216cm and 65 degrees. Filled my drink bladder with agent orange from ASN neutral bay and placed it into my new ultra PFD ( trek 2) and then suited up.

Then I’m standing next to my Epic V10 Sport, in all my race gear, focussing on the water, air paddling to warm up my shoulders. Left paddle in, leaning forward, ready for the first stroke “GO!!!” was the call from the jetty. We’re off!! I put in some very quick, short strokes to get the boat moving. I was out in front, going hard!! WOW im leading the race, this is cool , SHIT!! Next thing I know I’m out of the boat, wet. 200m into the race. How embarrassing. Trying to get back in… I fall off again. The water in the middle of the creek is so cold, I’ve cramped up. Shit shit shit.

I get back into the boat, it’s full of water, paddle is just out of my reach and I’m trying to hand paddle over to it so I can get moving. And then I’m off again. Five strokes in and the boat is empty, but there’s a problem, I’m now so cold my legs are cramping and shivering, and my hands are cramping on the paddle shaft. FINE!! Sprint time to warm up, I’m now 600m behind the group. 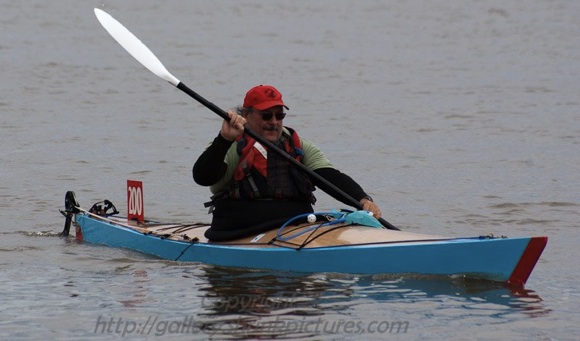 Today’s course takes us under the swanport bridge, under the rail bridge and around the pylons of the road bridge, back to swanport bridge, back to road bridge then back to the sailing club. So I settle into a faster than I wanted speed, put my head down , keep drinking and keep paddling! Three quarters of the way through I’m stuffed… a mixture of no race prep, getting frozen at the start and then having to sprint for the first 5 km has taken its toll, I lose abut 3 places to a couple of OC2’s and an OC1 in the last 6 km run home. I get in about 5ish – it’s cold, the wind is in my face and I’m hurting….. but standing out on the end of the jetty waiting is my son, Jud, waving to me. He grabs the bow of the boat as I touch the grass, and I just roll into the water, too stuffed to stand up. We pick the boat up, place it on the stands and head for a shower.

Dinner that night was a group meal, BYO bbq etc. It was great to sit down and chat to new people, and these people were all fantastic, very welcoming to us as newbies. I met a couple who I hadn’t seen in years, Liz and Graeme Hill, whom I grew up sailing with at Henley Sailing Club. After half a bottle of red we decided to call it a night and get some much needed rest before the 8.30am start for the next race.

Needless to say, early start meant cold conditions. This time I wore two rashies and wetsuit shorts over my skins pants. And NO sprint start this time. Just paddle off easy, keep upright and warm.

This morning’s race was upstream again, but all the way to Avoca Dell, about 11km upstream. I planned to sit behind James and see how long I could hang in there, but could only stay with him for about 2 km. I got passed by a TK2 (I think it was anyway,  it was just a ball of spray!) and a K1. The river was flowing quite well, about 3 knots in the middle, so needless to say sticking to the banks upstream was the only option.

Half way up the first leg, I caught up to a paddle steamer. I thought nice, I can sit in his wash and get dragged all the way to Avoca Dell. I caught up and saw a nice following swell behind him, I pulled in, swamped. The waves too steep and too short between them for me to fit and keep upright so I pull off to the side slightly and keep paddling. It took me about 10 minutes to get past this bloody thing!! They didn’t even offer me a coffee, although I had a good chat to a few passengers which took my mind off the cold and how my lower back was starting to hurt. I finally made it to the turnaround buoy and moved towards the middle of the creek. With an extra 3 knots of flow and the wind behind me, it should have been cruisy. But nope, there were now flies and sweat in my eyes! 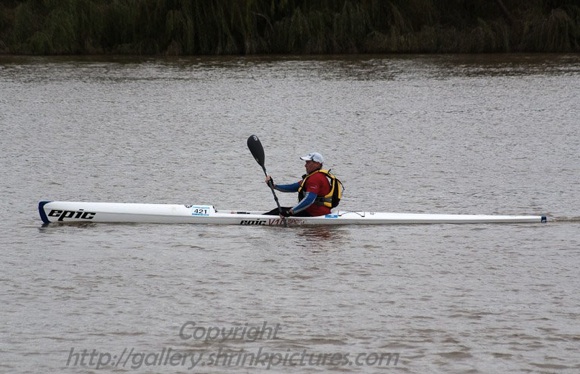 I kept powering home, finally making it back around 11am. I finished both races within about a minute of each other, the first race 2.23.25, the second 2.22.33. Not break neck speed by any account, but im happy, I finished and I didn’t come last (woohoo!).

Congrats to Brad Butler and the committee for a very well run event, I’ll be back next year. Now for the next event… 100km in 3 days down the Murray on the June long weekend. Then onwards to the HCC! Hope to see you all there.