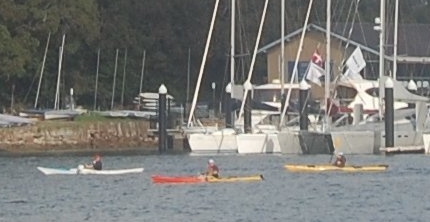 “Mate, you look a bit big for that kayak”

This was the start of a somewhat embarrassing exchange that occured during my first kayak session.  You see, at this point I’d fallen off my kayak several times and was lying like a beached whale on top of it hoping to get my breath back. The conversation was with a kayak passer-by who had stopped to help me.

On one hand I was somewhat relieved that there would be a witness to my likely drowning. On the other hand, the wise cracking old kayaker was somewhat getting on my nerves. Still, the fact was I really DID need rescuing, and I somewhat begrudgingly accepted his offer of a tow back.

Now picture the scene – Fat Paddler lying prone on his kayak, one hand reaching out and holding the back of another man’s kayak, whilst he struggled to paddle both himself, and my somewhat enormous dead weight, back to the The Spit. As if this isn’t embarrassing enough, he continues with:

“Mate, it would be easier to stay on if you lost a little weight”

“That’s why I bought the bloody kayak” I spat back between gritted teeth.

Anyway, as luck would have it, this bloke turned out to be a doctor. And not just any doctor, but a doctor that specialised in weight loss. Surgical weight loss! And his message was clear – eat right, get some exercise, and don’t let me bloody see you near my surgery, because surgical weight loss is a horrible, horrible thing.

He then went on to suggest I get to the chemist and start on the Tony Ferguson Diet, a diet used by fatties looking to lose some weight really quickly before he gives them a stomach band. You know the ones – no carbs, no dairy, no bloody fun. Well, there goes the last few morsels of my dignity (or so I thought).

Because at this point we reached a little  beach just before The Spit where he prompted me to let go. Right in front of a bemused old couple fishing from deck-chairs, barely containing their giggles at my less than elegant arrival on their beach.

What, haven’t you guys heard of the Fat Paddler?? I think I can still hear them laughing…..

11 thoughts on “Mate, you look a bit big for that kayak…”