A Fat Paddler must decide – Racing Ski vs Sea Kayak 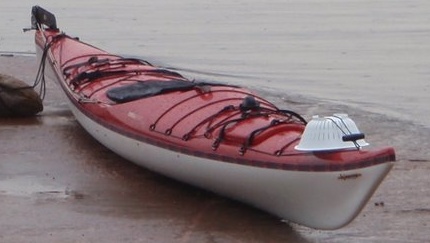 So the time has come to get a bit more serious, sell off the plastic kayak and invest in the paddling craft that will carry the Fat Paddler through the Hawkesbury Classic and onwards. Don’t get me wrong, I still love the Cobra Expedition, but I’m going to require the knowledge that I’m not filling with water (and sinking!) in the dark, and a level of warmth to get through the Hawkesbury Classic night paddle is crucial.

So with a mind to invest in something serious, I come to a certain paddling cross-roads. To the left, surf & ocean skis. Sleek, long, tippy sit-on-top racing craft designed to handle surf and ocean swell, and to generally go bloody fast. To the right, sea kayaks.  Designed to handle long trips, ocean swell and touring both at sea and on inland waters, these craft are generally more stable, enclosed, drier and offer a good platform for cruising.  Both types of craft can come in super-fast versions…. although generally the skis are always going to be a little quicker.

Stability is probably the first consideration. Ski’s are designed to go fast and non-stop. You don’t stop during a time trial and take a few happy snaps, mainly because once the ski stops moving forward its paddler will probably topple over sideways. That’s why when you see ski’s flying past on the water their paddler equipment is minimal (including clothing!).  Shorts, perhaps a camel pack for fluid, and thats it. Now, it would be safe to say that the Fat Paddler is probably not yet buff enough to sit topless on a ski in full view of the crowds lining Sydney Harbour.  Probably not even in the maximum clothing allowance for ocean ski paddlers, a skin tight rashie. This would simply be unacceptable. 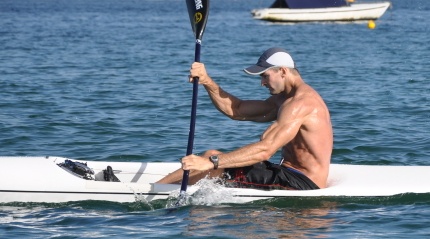 An average ski paddler – NOT a Fat Paddler!

Sea kayaks on the other hand are harder to get into (especially for, errr, more hefty paddlers). And I might add, near impossible to get back into when you fall out of them.  They are also heavier, wider, and not in the same speed class as their skinny ski friends. Hoswever, they do have a few other benefits. They are MUCH more stable. You can happily have a rest mid-paddle, whip out the camera and take a few happy snaps without fear of falling out. You can even remain stationary in sea swell and calmly enjoy a drink or a bite to eat. They are also drier, with far less water washing across (and into) the cockpit. You can use them almost anywhere – sea, rivers, harbours, lakes. You can load them up with camping gear and take off for a few days. You can even catch a few fish from them.

My problem is of course I want both. I love to paddle fast, and a ski would suit this perfectly. I also like to rest & take in the view, and a kayak is better for this. So what I need to do is find a Sea Kayak that is also built to go faster than most. Which brings me back again to the Boréal Nanook, the high quality Canadian-made composite sea kayak built for bigger paddlers. 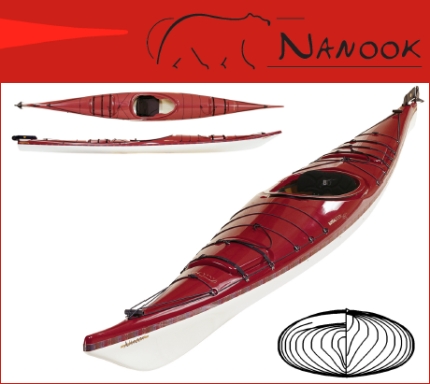 This is a fine kayak. Built solidly using single sheets of fibreglass and vinyl-based resins, it is made to last. With a deeper profile and larger cockpit, it is good for the bigger paddler to get in & out of, particularly at sea. A good 5m+ length, high flotation and external rudder mean that even with a heavy paddler on board it will still track nicely and at a good speed. It is going to be very hard for the Fat Paddler to go past this kayak – watch this space to see which way I go!

Of course, I have forgotten to mention the humble short surf-ski, which should be at least considered in the equation if the below photo is anything to go by….  😉 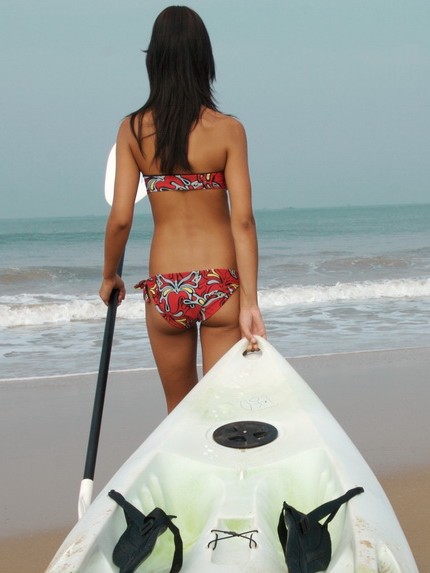 The short surf-ski has a certain appeal…