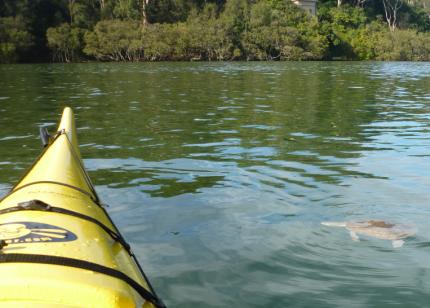 It was an absolutely stunning winter’s day in Sydney. Warm, sunny, no wind. Perfect paddling weather. So I decided to revisit the Lane Cove River off Sydney Harbour. Now, I’m putting in a pretty hard paddle when suddenly I hit something, something round and hard and somewhat turtle-shaped. Turtle-shaped? Did I just hit a turtle? Are there turtles in the Lane Cove River?

So I turn around and go back to find out if it really was a turtle, and if so, to see if it was ok.  And sure enough as I loop back around there’s a turtle floating still and dead-like in the water. 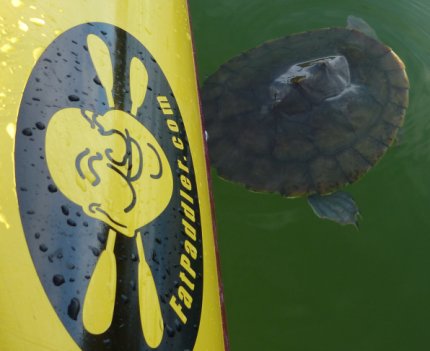 A bit of a touch on the shell however and he kicked his little legs and craned his neck around to have a look at me. Definitely alive, no damage, good as gold. So not wanting to disturb him anymore, I let him swim off before returning to my paddle.

I googled this when I got home, wondering if there were actually wild turtles in the Lane Cove River, or if he was a pet that had escaped into the river system. And sure enough, it seems there are two species of turtle native to the river.  The common Eastern Long-Necked Turtle (Chelodina longicollis) and the rarer Sydney Short-Necked Turtle (Emydura macquarii dharuk) both inhabit this area, and a quick comparison of photos of the two turtles proved that my friend is in fact the rarer Sydney Short-Necked Turtle.

So there you have it. You learn something new everyday!  🙂 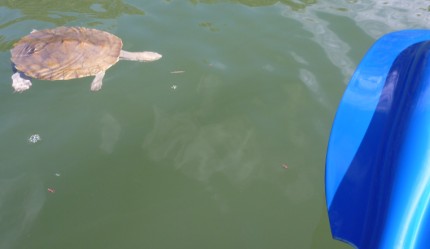 3 thoughts on “Rare Animal Sightings on the Lane Cove River”