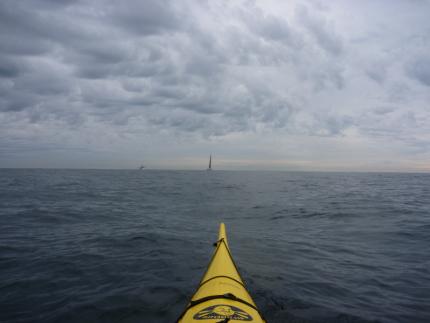 On the Tasman Sea – ship ahoy!

Ordinarily the ocean swell that buffets Sydney is pretty intense and my paddles have largely remained on estuaries. But on this particular day, a quick paddle to Grotto Point to watch the sunrise brought me into the swell which was, well, non-existant!

So for the first time I continued my paddle past the Grotto Point reserve and into Manly, before paddling around the inside of North Head. Then as I got to the exposed end of the head, I decided to keep going and head to sea. 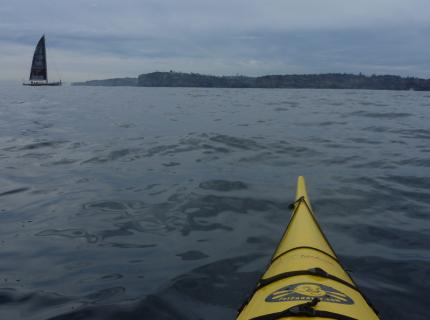 Watching a maxi-yacht re-enter the Harbour

This still involved a good km or so of paddle past the southern cliffs of North Head to actually leave the Harbour and get out to sea (and braving the swell bouncing off the cliffs and broadsiding me from the opposite side to the swell), and by this time the swell had not only picked up, but had wind-driven cross-waves of 4-5 feet making my paddle pretty scary.

Then finally I passed the head and paddled about half a km out to sea, keeping a careful eye on yacht and fishing boat traffic, whilst admiring the rugged cliffs of the Sydney coastline. 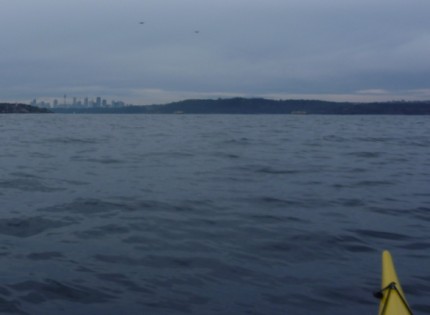 Looking back at the Sydney skyline from sea

Then after deciding I’d been scared long enough, I turned around and rode the swell back into the Harbour before returning to The Spit for a much needed coffee at Sydney Harbour Kayaks.  Another minor challenge on my journey out the way. Now, bring on the Classic! 🙂

6 thoughts on “Out to sea for the first time”