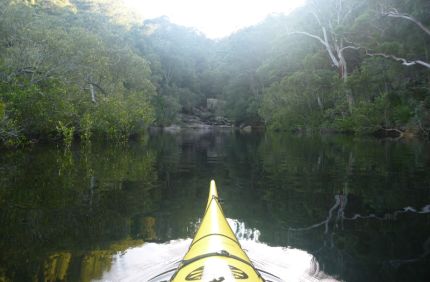 A nice fella named Bill contacted me via this website and kindly invited me to paddle up at Saratoga (NSW Central Coast). So early on a Sunday morning I packed the kayak and head off for a leisurely drive up the coast to meet him.

Bill lives with some lovely folks on a water-front property at Saratoga, a small village on the Brisbane Waters not far from Gosford. From there he and I set off for a paddle to Phegans Bay via the numerous islands & oyster beds around Woy Woy. Now Bill paddles a Mirage 22, a long sleek cruiser designed to gather a fair bit of speed, with a low profile and a sleek hungry look about it. To be honest, this Fat Paddler was a little concerned about whether I’d be able to keep up. But it soon became apparent that I was perhaps a little faster than I thought I was, and a quick check of Bills GPS unit showed that a cruising speed of 4-5 knots was a pretty easy pace for both of us to keep up.

Bill and his sleek Mirage 22

Once into Phegans Bay, Bill took me on a tour to a hidden bay with a gentle waterfall and still pool, where we paused for a few photos. 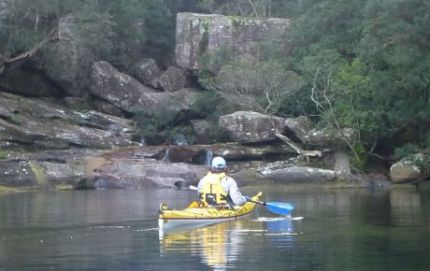 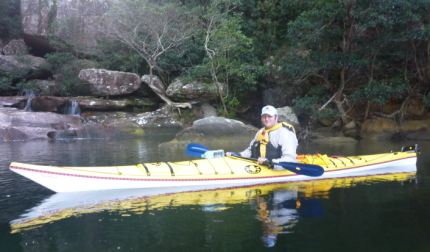 Fat Paddler, relaxing by the waterfall

From there Bill showed me a great little spot to land with a secret little camp spot, an area I’m very keen to do an overnighter at (Burnsie, take note). 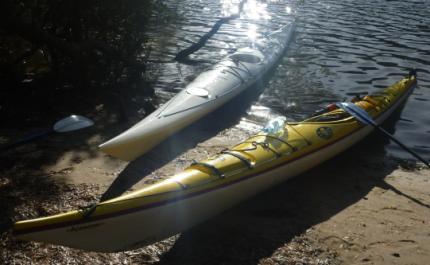 From here we then made our way back through the oyster farms to Saratoga where the kind folk back at our landing site provided us with peppermint tea and biscuits – a very civilised way to end the paddle!

Lastly, I have to mention this despite Bills protests, but it was really refreshing watching Bill fall into the drink whilst trying to get into his kayak. Don’t worry Bill, rumour has it I topple in a bit myself. Either way, it made for a good laugh first thing this morning!

Bill's only dry boat-entry of the day!

One thought on “Paddling Brisbane Waters with Bill”