Scary Creatures from Below 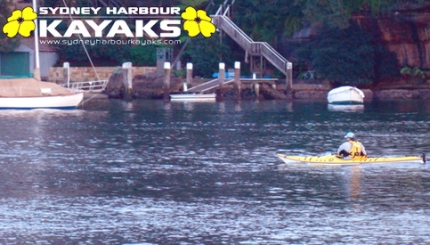 It started out like any other paddle;  arrived at The Spit before 7.00am, pushed out into glassy conditions at dawn and started to warm up my shoulders with some big paddle strokes. In front of me were two other paddlers in nice composite kayaks that I was trying to get a closer look at  by powering up behind them. And then something caught my attention.

A dark shadow loomed up underneath the water between the two kayakers 15 metres in front. Then as I leaned forward trying to get a closer look, the water next to my boat at knee level burst forth and a SEAL (or sea-lion, couldn’t quite see) popped up and looked me square in the face.

Now as a paddler on Sydney harbour, I have a healthy fear of sharks. I can think of at least three serious shark attacks in Sydney last summer, one of which happened in the harbour itself. Anything, and I mean ANYTHING bigger than a shoe that comes up from beneath the water is likely to scare me senseless. So at this point, with the sound of JAWS playing in my mind, I very nearly soiled myself with fear.

But it seemed I wasn’t the only one. As the seal realised it was looking into the face of one of the planet’s meanest predators (not to mention one with a big appetite!) its eyes widened, it jumped almost completely out of the water away from the boat and dived back down under the water. And then it was gone.

I stopped and peered behind me waiting for him to surface (and for my heart to calm down) but I didn’t see him again. He simply disappeared. All I can say is I hope the sharks didn’t get him.  😉

4 thoughts on “Scary Creatures from Below”