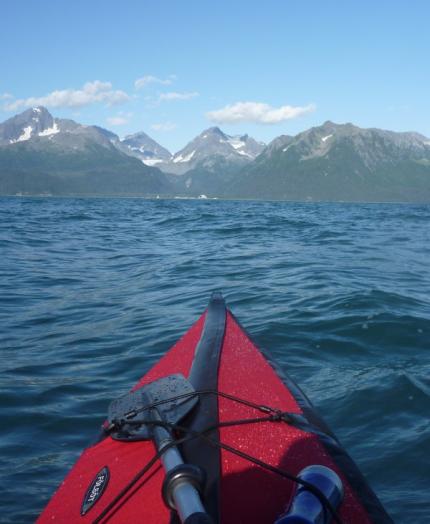 It is very hard to describe Alaska in words. It is a place of extremes, both harsh and beautiful.  Green forests that simply stop part way up mountains, to be replaced by jagged rocky faces. Beautiful blue water that is freezing cold to touch. Locals that can be scary or nice.

I flew into Anchorage from Chicago with a bunch of US soldiers heading up to the military base at Fairbanks (nothern Alaska). From there I had a quick stop over before catching the Alaska Rail train through the most amazing scenery (including seeing moose) to Seward, a small town on the Kenai Peninsula that is the gateway for cruises and tours to the glacier fields.

Once there in Seward I spent the afternoon walking around the entire town, staring stupidly at the enormous snow-capped mountains that surround the town, before getting settling down in the Hotel Seward.

Now today’s paddling plan centered around trialling the Folbot Cooper (now named “Tabasco”). Of course 30 knot winds and breaking waves are not ideal for a test run of a new kayak, but it was my last chance before heading off to the glacier fields and I had to get a paddle in it done to make sure I could handle it before putting it in much more dangerous waters.

So I got a lift down to a rocky beach south of Seward and proceeded to put the kayak together, under the watchful eyes of gathering people. 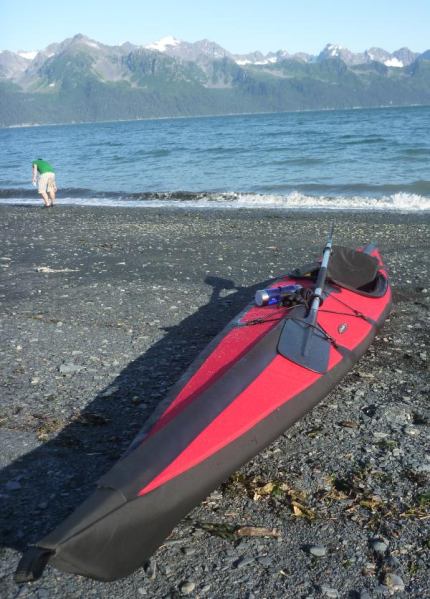 And with a gathered crowd intent on watching me take off, I pushed the kayak out into the oncoming waves, jumped in quickly and took off.

Now the first thing that struck me was how much flex there was in the body. As I was riding over the oncoming waves the kayak would feel like it was bending under its own weight. But other than the feeling, the kayak proved to be extremely stable. In fact, much more stable than my Boreal Design Nanook (which surprised me, as I love my Nanook!). I could actually pack the paddle away under the deck rigging and know that I wasn’t going to need it to brace against the side-waves that were buffeting me.

So once I settled in and felt comfortable on the Folbot Cooper, I started to look more around me. And not ten metres away, a curious sea-otter was stretching its neck to get a good look at the fat guy in his red kayak! Well, I scrambled for the camera but in the face of the waves I found it hard. In the end, once I got the camera out the otter disappeared.

In general the snow-capped mountains surrounding the bay are just awe-inspiring. It really is hard not to feel something spiritual about their presence. I’m not sure my photos do them justice but they really do bring a huge smile to my face!

Anyway, after an hour paddling I brought the boat back in and disassembled it on the beach,  again in front of a small and curious crowd.  All up a very successful first paddle of the folbot, especially as I didn’t fall in! 🙂 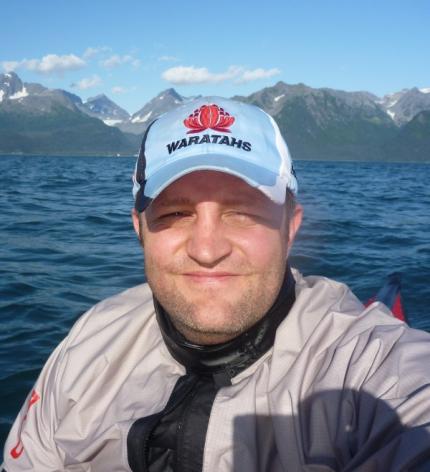 10 thoughts on “First Alaskan Paddle in my Folbot Cooper”