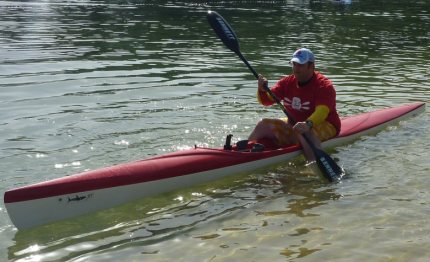 Trialling a racing ski has been in the back of my mind for some time, and whilst at the Balmoral Blast race event this morning, paddling mate Olli offered to give me a go on his Fenn XT. Now keep in mind that I had forced him to get up early for the 18km race he’d just completed, so he was smiling evilly looking for his revenge. It didn’t take long.

For a man used to a sea kayak, a ski is going to feel pretty tippy. The Fenn XT is the “beginners model” of skis and is more stable than the narrower/faster versions used by the pros. This lulled me into a very false sense of security, because it wasn’t long at all (ie about 4 strokes into the paddle) before I fell into the drink.

Now I’d like to say confidently that had I been using my own paddle and not Olli’s wing paddle, that I might have been able to get enough speed up to stay on the ski. This would likely be a brazen lie however. The fact was I was unable to take more than 4-6 strokes at most, with my feet and legs dangling over the edges of the Fenn for stability, before falling in. Olli of course, thought it all hillarious. 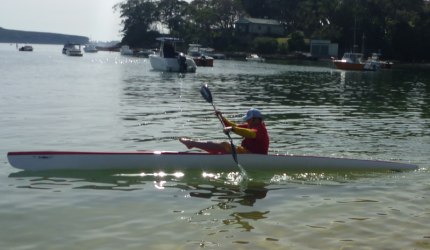 Needless to say I didn’t get too far, and only really succeeded in getting myself extremely wet. Olli had had his revenge, and I was in dire need of a change of clothes. Of course, next time I’ll do it with my OWN paddle……….. 🙂 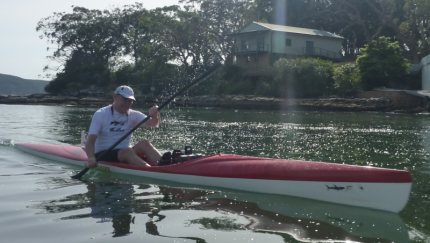 Olli showing how it's done