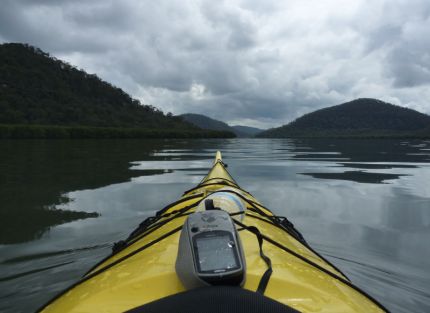 With my 111km paddle in the Hawkesbury Canoe Classic just weeks away, I thought I should get out and kayak up the Hawkesbury itself to get an idea of the conditions I’d be facing. On this particular day, the tide was up but starting to go out, so I was going to be paddling against the current. Of course that’s never stopped me before, so off I went.

The river itself is beautiful and awe-inspiring. Surrounded by ever-changing landscapes featuring cliffs, hills and mangroves, it is a beautiful place to paddle. Even the basketball-sized jellyfish make great viewing! Locals have built incredible houses on parts of the river bank and water-skiers, fishermen and yachts were all out enjoying the wide expanses of water. 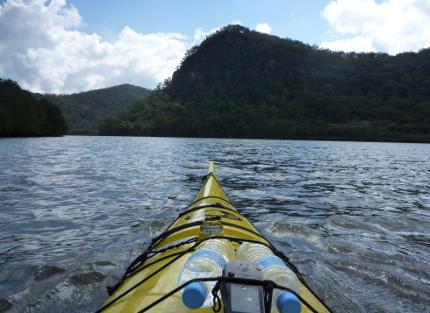 The one thing I wasn’t enjoying however, was the current. According to the GPS I was only cruising at 6km/hr or less, and after a few hours I was down to a measley 3.5-4km/hr.  At this rate I wouldn’t finish the Hawkesbury Classic within its cut-off time, and the slow speed was starting to really concern me. So I stopped to have a long drink of water and a muesli bar and noticed the GPS reading 3.7km/hr. When I looked up, I realised I was actually doing this speed, only backwards (!!), and that the outgoing tide was rushing down the river at a tremendous pace.

At this point I took off further up the river and struggled at a measley 3km/hr into a rushing current, before deciding it was time to turn around and head back (this time WITH the current). At the same time a huge electrical storm was blowing into Sydney and a good 30-40 knot headwind started blowing against me, but even with just a few cruising strokes, I was up to 11km/hr (even heading into the wind!). Of course, after 15 minutes of paddling the tide started coming back in, combining with the wind to make my final 10kms a paddling hell. 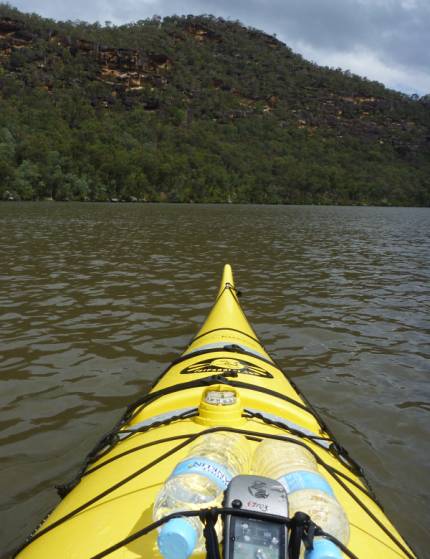 As I approached the end of the paddle (having done 30kms almost constantly against the current) the eletrical storm hit Sydney with enormous fury, dumping two months of rain in an hour, blacking out power on Sydney’s north shore, and attempting to drown me as I pulled the kayak out of the water and tied it down to my car. Still, a good training paddle, so I can’t complain (much). 😉

2 thoughts on “Hawkesbury River – A Tale of Two Currents”