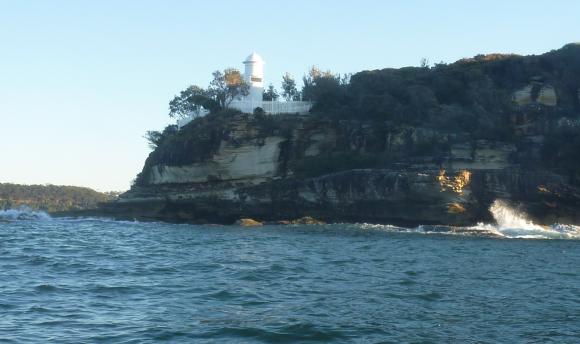 Adventures always seem to start when you least expect it. Over the ANZAC weekend I was due to paddle & camp out in the Shoalhaven Gorge wilderness area, but sickness struck my paddle mate and it was cancelled in the hours before we were due to leave. So instead I met up for a very early paddle with Timbo, kicking off from The Spit before 6am with the sun still yet to peek up over the horizon.

This April had been the warmest in Sydney for over 30 years, but on this particular morning the temperature had dropped to the coldest levels for some time, so much so that I’d pulled out the CAG for the first time since last winter to help keep warm and dry. The forecast was also for 30 knot south/south-easterly winds and rough seas, so I figured it was definitely time to rug up.

Once on the water though the conditions were somewhat confusing. As we paddled towards Grotto Point to catch the sunrise over the Tasman Sea, we took stock of the conditions. Light winds from the west (instead of the south-easterlys we’d expected), and a surging out-going tide that seemed to be creating it’s own swell. Middle harbour is incredibly shallow between The Spit and Grotto Point, and with a big tide range, the surge was creating conditions much like a tidal race.

As we approached Grotto Point, we could see enormous spray and crashing waves where the ocean swell was hammering the cliffs. By this stage we were practically surfing the outgoing tide, but then hitting incoming swell coming from the south-east. And as we rounded the point, the swell size was awesome, with 3 metre swell surging through the Heads and smashing against the sea-side of Grotto Point.

From here we had an incredible view of the sunrise as the tide pushed us out past the point and towards New Zealand. I’d have taken photos but the big swell was hitting the tidal waves and creating a bouncy maelstrom of moving water that did not afford me the pleasure of putting my paddle down to reach for the camera! So as the sun arose, we turned and head back for the safety of the point, watching as the huge swell exploded against the cliffs.

As I rounded the point, I noticed Timbo dropping back to wait for a wave. Grotto Point consists of rocks that gradually slip beneath the water, meaning the waves jack up over them and then curve to the right into the bay behind. Timbo found a wave to his liking, hit the paddle hard and after teetering on the crest of the wave, toppled down onto its face and surfed around the point. Almost. Because as he was passing over the rocks of the point he decided to drop his skeg, which caught the rear of his kayak as he was starting to slide the stern out across the wave, and promptly threw the boat over and upside down. A few seconds later he rolled back up, a little embarrassed and thankful he’d somehow missed the rocks that were under him. 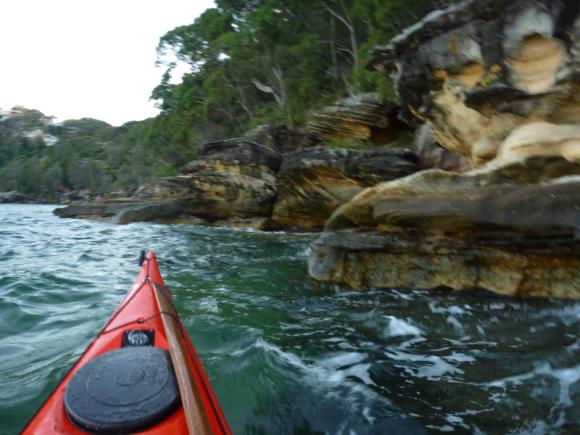 Time to play along the rocky cliffs behind Grotto Point

We cruised into the rocky shores of the bay behind the point as Timbo shivered in his now wet state. The swell was bending around Grotto Point creating plenty of moving water amongst the rocks, so I pulled the skeg all the way up and started slaloming amongst the rock garden. As I laughed at the fun of the wave surges, I started to try tighter turns between tighter gaps in the rocks, relying on my tough Adanac Greenland paddle to help soften the impacts as they happened. 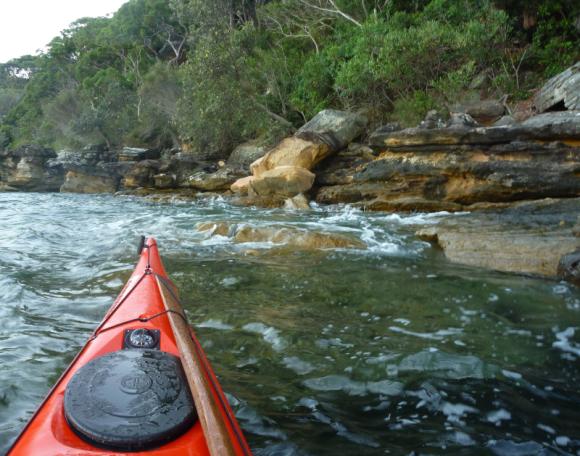 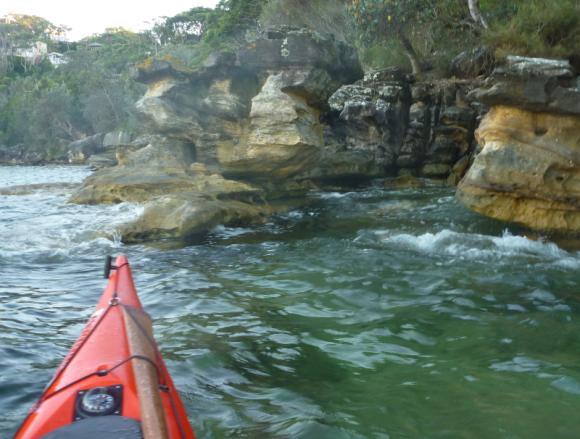 I can fit through there, NO problem! *gulp*

As we rounded the end of the bay, I found a nice big detached rock with a small gap close to the rocky cliff behind it that would only allow me to pass through on a wave surge. Full of confidence, I waited for the wave and then hammered it into the gap, sliding the boat around on the surge and passing through nicely. Except as the surge sucked back out, a big hole emerged in the waters behind me sucking me back into the cliff. Taking some fast hard strokes I pulled away from the cliff as the next big swell surge rolled under me and into the cliff. Then looking over my shoulder I could only watch as the surge bounced off the cliff, jacked up into a tall breaker and hit me broadside, rolling me into the rocky garden with no room to attempt a roll.

As I popped up holding onto my kayak, Timbo came around from behind the rock having missed the whole thing and wondering why my boat was upside down. The swell was bashing me against the oyster-encrusted rocks, so I was pretty keen to get back into my kayak, and after recovering my paddle & hat in the lumpy waters quickly did an assisted entry back into my boat. Now it was Timbo’s turn to laugh, as both of us continued on our way soaked from our respective swim!

Once we arrived at Clontarf Beach we pulled up to clear out the water in our boats and have a bit of a drink/rest. Looking down I could see I’d opened my ankle up on the oysters and was showing a fair bit of claret for my troubles, but thankfully I’d had wetsuit shoes on and my feet were fine. After another laugh at each other, we got back in our kayaks and head off into Middle Harbour in search of something a bit easier and more civilized. We decided that what we really needed after all the excitement, was the happiness that comes with Middle Harbour’s own Coffee Boat… (to be continued)