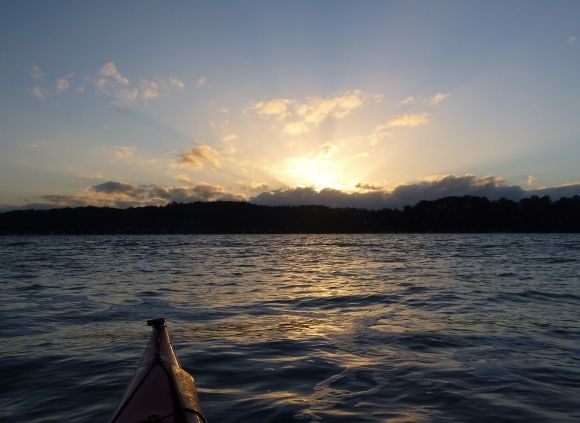 Cold, dark and quiet. This is how we found the put-in at the southern end of Pittwater this winter’s morning. Grumm, The Famous Tim Kennings and myself had met up around 5.30am for a Pittwater paddle, and despite our enthusiasm, we struggled to get ready in the pitch black and icy conditions of this winter’s morning. The water, although much colder now than in recent weeks, felt balmy compared to the cold air around us. But despite all this, we pushed off and head north for Scotland Island and the impending sunrise. 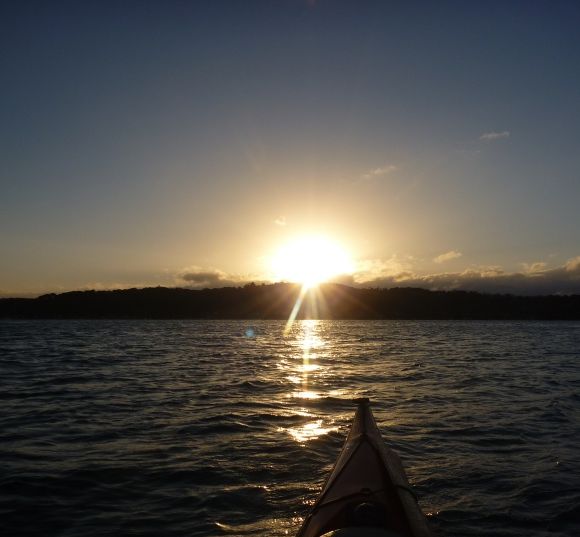 Sunrise. Worth the early start in the cold.

Despite the incoming tide, a blustery southerly wind was pushing us along as well as whipping up some steady wind waves. Us usual, Grumm was fighting to turn his boat more than 5 degrees, and you could see him gritting his teeth in the cold air. But I had found that my boat was starting to ride the wind waves, and with a bit of a burst here and there I found myself racing ahead on the steep little waves.

Grumm and Timbo in the early light

Finally we got the sunrise which we all stopped to watch (it never ceases to leave me stunned!). Then we settled in with the wind behind and quickly made our way up the waterway. By now we were all feeling the need for coffee, so we paddled onto a secluded little spot called Portugese Beach. 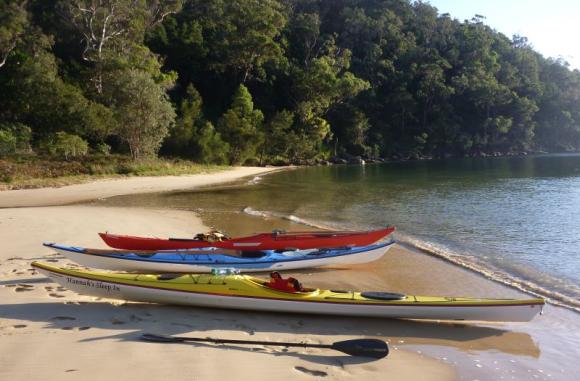 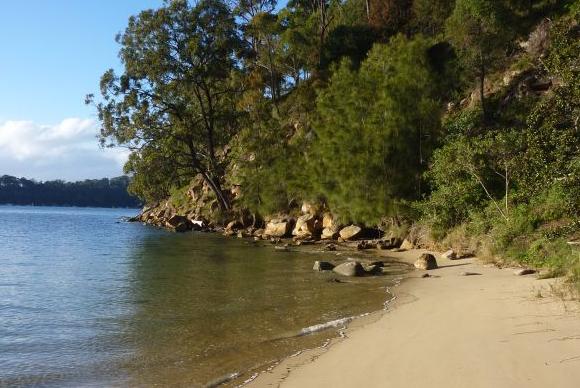 I whipped out the Trangia and put it to use to make coffee for us all. The Famous Tim Kennings had brought his own coffee cup (as had I), but it appeared Grumm hadn’t received the memo. Rustling around in my dry-bag, I managed to find a spare for him so we could all enjoy a cuppa. And a good laugh at Grumm’s expense. 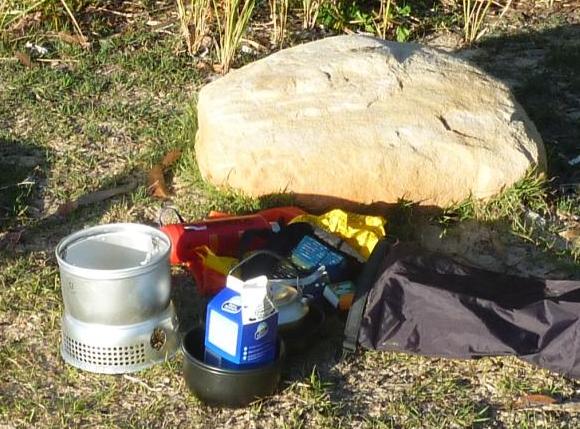 Coffee kit - a necessity when there's no coffee boat around! 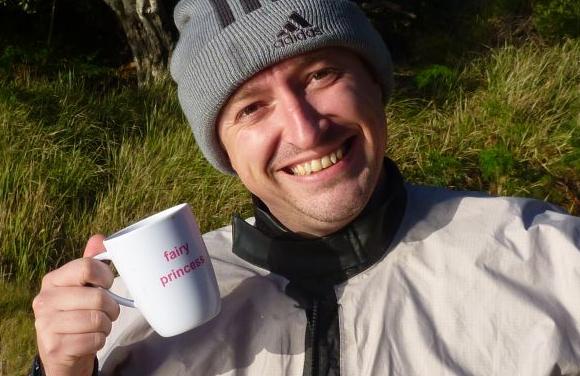 We were joined by a very friendly Magpie as we finished our coffee, and then a large Kookaburra flew in for a closer look too. We’d also seen a white-bellied sea eagle earlier, so the birdlife display was adding to a quite magical morning. 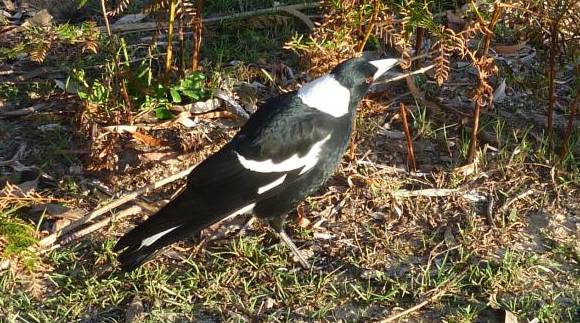 The friendly Magpie, who was keen to get into Timbo's muesli bar 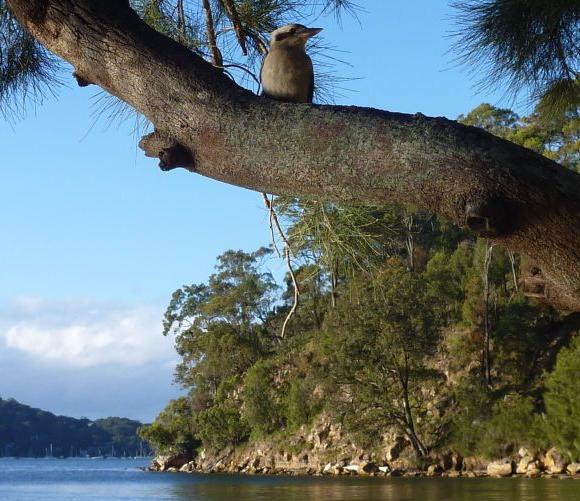 The curious Kookaburra who flew over to check us out 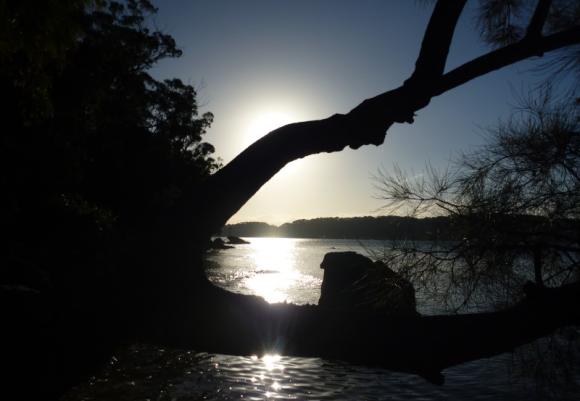 Just a random artsy shot I took from the beach

With us all feeling warm from the sun and hot coffee, we set of from the beach hugging the western shoreline for a closer look. Timbo and I paddled between the rocks, adding a few bumps and scratches to our kayaks, but Grumm paddled out to deeper waters as he continued to struggle with the steering of his fast, straight rocket. Finally Timbo had a quick look and suggested Grumm stop using his skeg. The look on his face was priceless as he realised the answer was so simple, and with that his skeg was up and for the first time, he approached the rocky shore and cut through a little gauntlet. 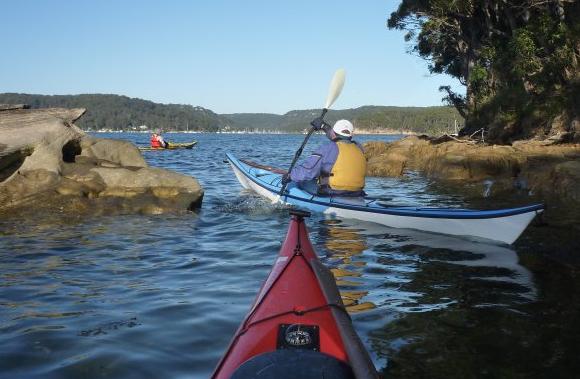 Exploring rocks with Grumm holding off in deeper water 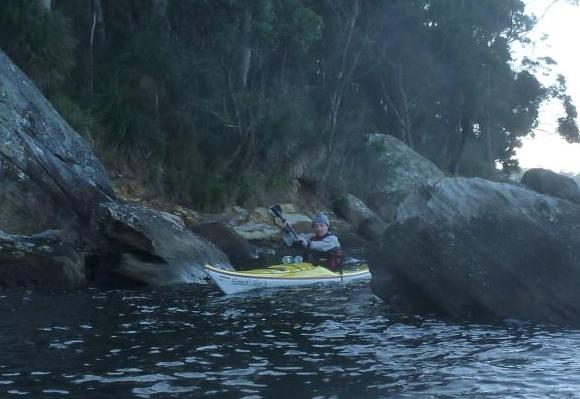 Grumm finally gets amongst it!

With Grumm now in tow we hugged the rocky shores for a while until we came across a fairly hidden mangrove area. Looking closer, we found a channel throught the mangroves that opened up into a beautiful little lagoon, complete with crystal-clear water, a gently flowing waterfall and lush green forest. For a while we just drifted on the lagoon, enjoying the peaceful ambience of this hidden gem. 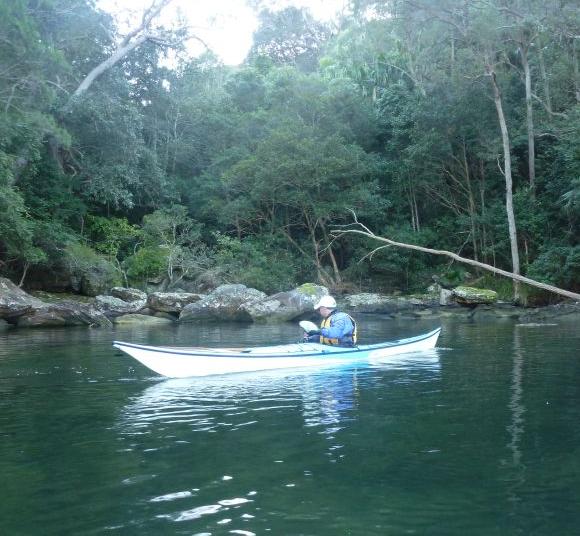 Timbo in the hidden lagoon

Finally we head off for the final push home. Paddling into 10 knot winds and against the tide, we pushed on with Grumm racing ahead in his faster boat. Pittwater was starting to get busy with numerous big cruisers getting out on the water, giving The Famous Tim Kennings and I a few final surfing opportunities, before making the final run into McCarrs Creek where we had started.

Ordinarily this would be the end of the adventure, except Grumm had one more treat in store for us. He reached the shore a good 30 metres in front of us and to my surprise, looked to attempt a roll right on the beach. Except I realised it wasn’t a roll, but just a brilliant stack into the water as he’d tried to get out. Both Timbo and I cruised into the beach with tears of laughter in our eyes as the now very wet and embarrassed Grumm grinned at his misfortune. A brilliant giggle at the end of the paddle!

Finally, as we packed our kayaks onto our respective cars, we had one final spectacle as a lovingly restored old Ford cruised past us all. Not something you see everyday! Cheers – FP 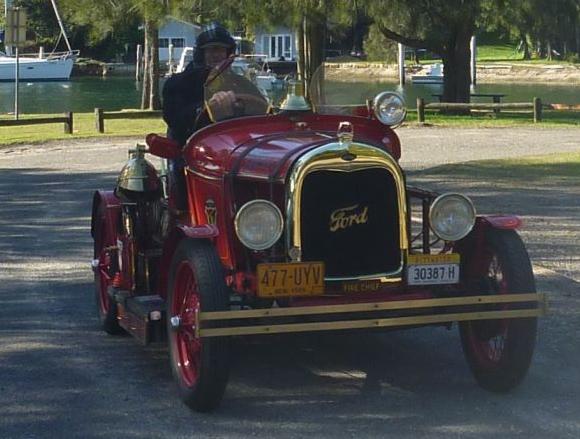 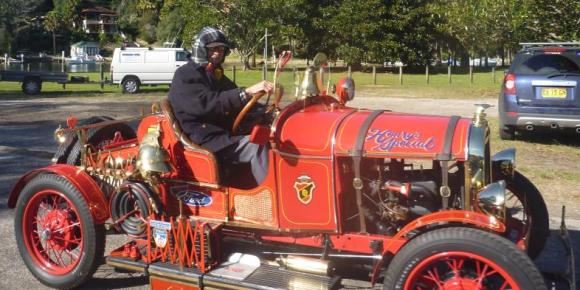 A labour of love