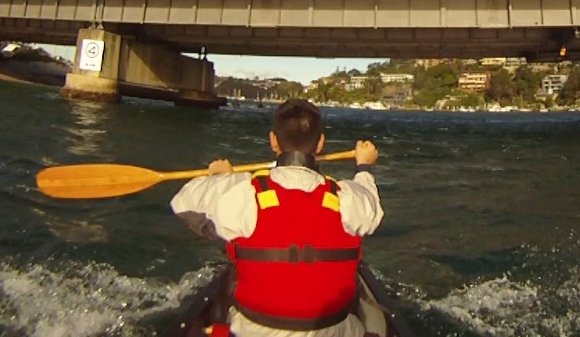 Heading towards the The Spit Bridge as the wind increases

The weather forecast was pretty grim, with possible gale-force winds lashing Sydney’s waterways. But with one week to go before the Hawkesbury Classic, Gelo and I were determined to get a final training paddle in and set off north heading towards Bantry Bay. The protection of The Spit had lulled us into a false sense of security but as we approached the The Spit Bridge the water starting churning like a tide-race. 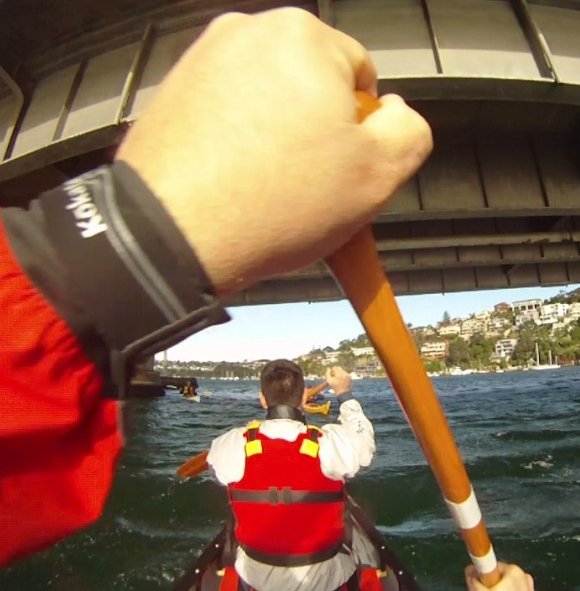 Lots of kayakers heading downwind. All laughed at us!

As we passed under the bridge we realised it was wind chop churning the water. Turning north-west we now found ourself paddling directly into the full brunt of the gale-force winds, with whipped up waves crashing into the bow of the boat as we fought to keep our canoe pointing into the wind. Gelo was glad for the bow cover I’d added which was keeping him dry but his fear as the nose of our little boat crashed down into the water was clear. 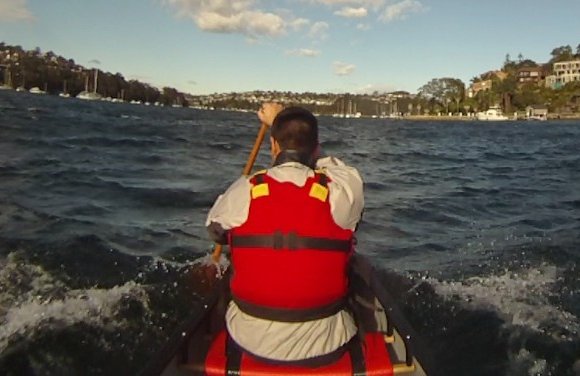 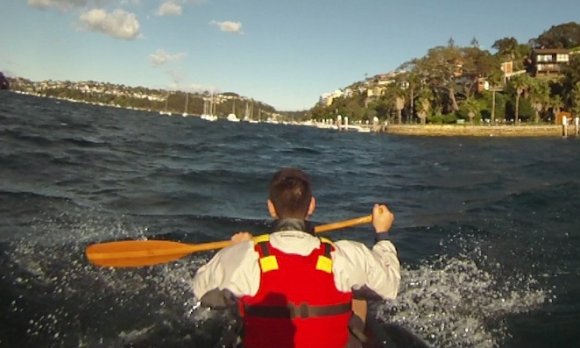 The longer we paddled, the more the wind seemed to increase

As moved further up Middle Harbour the winds got stronger and we found maintaining control becoming increasingly hard. I was throwing the paddle from side to side, paddling rather than steering to make sure we kept enough forward momentum to make headway, but as the boat got caught on waves we felt her start to broach before I slid off my seat and into the bottom of the boat to stabilise her (125kg of ballast baby!).

As we started to turn to head north-north-west we found the wind increasing even more, but despite the difficulty we paddled hard into it, joking that at least we were beating the moored yachts beside us. Except on closer inspection they looked like they were pulling ahead of us, because despite our paddling, the wind was now finally pushing us backwards! I slipped back into the bottom of the boat as we took the decision to turn around and head back downwind.

As we showed our gunwales to the wind we nearly rolled over. With a fair bit of effort we managed to brace ourselves against the wind until finally we were away, racing downwind with the waves now behind us. Then to my utter disbelief, the canoe started riding little runners, surfing downwind with me desperately holding a rudder stroke to keep the boat heading straight. This was almost fun, despite the fact it was utter madness!

When we finally made it back to The Spit Bridge we decided to paddle the protected green waters of Chinaman’s beach instead, which was a gentle walk in the park in comparison!

Finally relaxed in the protected bay of Chinamans

When we finished we’d only managed 90 minutes of training, although it felt like we’d put in a good 20 kms! Luckily we had a little additional activity planned, so we packed up the canoe before heading off to meet up with the other members of Team Fat Paddler for a round of hamburgers. 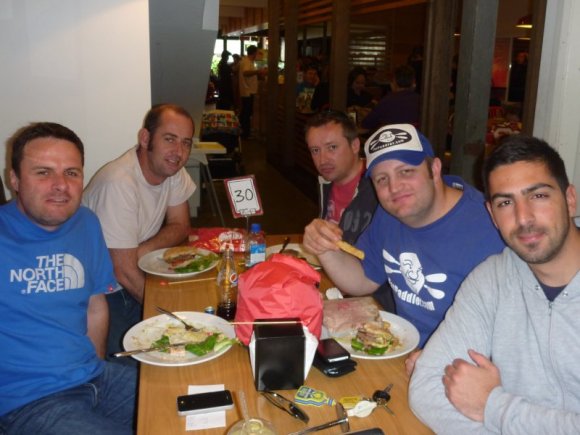 So now our training for the 2010 Hawkesbury Canoe Classic is over. Over the coming few days I’ll finish the boat fit-out and we’ll be set for the start! You never know, maybe  we’ll see you out there. Cheers – FP

Canoe Training at Dawn on a Misty Middle Harbour