Where are all the paddle lovers out there??

A few weeks ago I ran a “Paddle Lovers of the World” competition on the FatPaddler.com Facebook Page. The rules were simple – tell me in 25 words or less why you want to win, tag yourself on the FP World Map, include your location, and make me laugh!

The competition is now closed and I wanted to share a few stats with you. Number of comments on the FP Map of the World – 141. Countries the entries came from – 7. Number of individuals who entered – 29. In terms of the most active country for entries, here’s the graph.

Entries by country - easily taken out by the paddle-mad Canadians!

The Facebook commentary went from funny entries to epic poems and finally degraded into promises of nudity, latex body-painting, threats to puppies, threats to Fat Paddlers and finally a Declaration of War between Canada and the USA!

There were a lot of entries that went over the 25 word limit, and these I had to cut out of the competition straight away (despite how good they were). Australia decided to largely ignore the rules (we did start out as a penal colony after all!) and instead entered with a series of limericks and heroic poems. In fact these were pretty bloody good, especially from the Hanley husband & wife team from southern NSW. The poems were so good that despite being ruled out, I decided to publish them here (enjoy).

One day whilst browsing and surfing the net,
I found the fat paddler as it was a sure bet,
A big man like me in search of a boat,
with a similar size I hope it does float,
Following his adventures on his blog,
giving inspiration to me without… being a flog,
I am deserving of the prize I deserve to win,
because much like you I am almost thin,
Again thanks for the adventures huckleberry Tim (Sydney Australia).
Ps I know it’s more than 25 words but hey… I was on a ROLL
– Timothy Raheb (Australia)

There was a Fat Padler named Sean
From the HCC Race he was torn
He says he’ll be back
for yet another crack
Maybe next year’s shirts will be fawn.
– Wayne Hanley

On Macquarie Park we all descend,
Charity …funds on us depend.
Join the que, sign the forms,
Pay no heed to impending storms.
Lined up for the start, see lightning flicker,
No worries mate, we’ll just paddle quicker.
The race begins, so does the rain,
Push on through the night, ignore the pain.
Waves in the darkness, wind in your face,
Checkpoint approaching, pick up the pace.
Why keep paddling FP you implore?
There’s SAUSAGES waiting. Need I say More?
– Mel Hanley

Fantastic stuff! But with those out of the running, I had to judge the remaining entries for a winner and found the task pretty hard, so I enlisted the services of my household’s Minister for War and Finance to give her advice. Over a chocolate and a cup of tea we debated the merits, and came up with the following winners:

“I want the FP t-shirt so I can have a bib when I eat my favorite FP meal… SAUSAGES!!”

This entry was simple but true to the ethos of Fat Paddler. Simple, yet beautiful. Simple, yet honest. Simple, yet…. hmmm, sausages!!! Congrats to you Jim, drop me an email and we’ll sort out your Grand Prize – Team Fat Paddler HCC10 tshirt, kayak stickers, “Crossing the Ditch” book, and Badger Paddle Sock.

This comment started the slide into sleaze, with more women following Medina’s lead by jumping in and stating that they too were naked, wet, cold, in the snow, painted in latex and so on. Frankly it disgusted me. Yet, so compelling. And as we say in marketing circles = “sex sells”. Medina started it all and wins the second prize – Team Fat Paddler HCC10 tshirt, Fat Paddler kayak stickers and a Badger Paddle Sock – drop me an email to claim your prize. 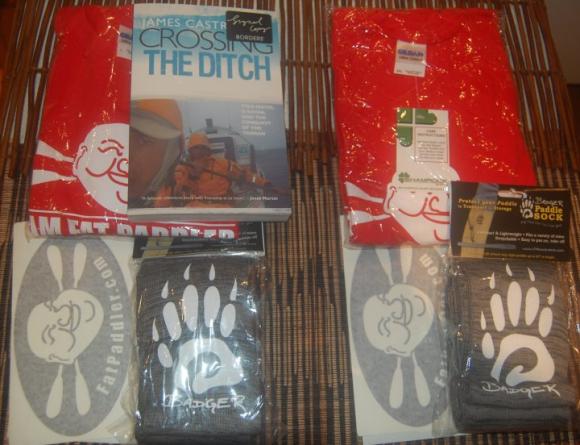 Prize Packs - a few goodies for the paddlers out there!

I really was uber impressed with the quality of the entries, and have decided to issue SEVEN consolation prizes to the following people:

1. Tracy Seffers (Charles Town, USA) – first entry in, and the first person to comment on the orientation of the map.

2. Daren Parfitt (Blaina, Sth Wales, UK) – for having a Mo in Movember, and for the awesome statement “This face that tshirt,WINNER”

6. Lee Gilbert (Petawawa, Canada) – because I really don’t want you skinning puppies to cover your SOT!

For each of you I’m going to have a Team Fat Paddler tshirt made up and sent out to you – that’s right, you’ll each be getting a TFP tshirt for your efforts! Drop me an email asap with your details and preferred tshirt sizing  and I’ll place the order once I receive all your details.

To all nine winners – a big congrats and please send me a photo of you in your tshirt wherever you are in the world!!

That’s it paddlers. A huge thanks to everyone who got involved, I hope you enjoyed it and made a few new Facebook friends along the way. Cheers! FP

Paddle Lovers of the World Competition

4 thoughts on “Winners: Paddle Lovers of the World Competition”