A Tropical Adventure – How to Anger a Fijian 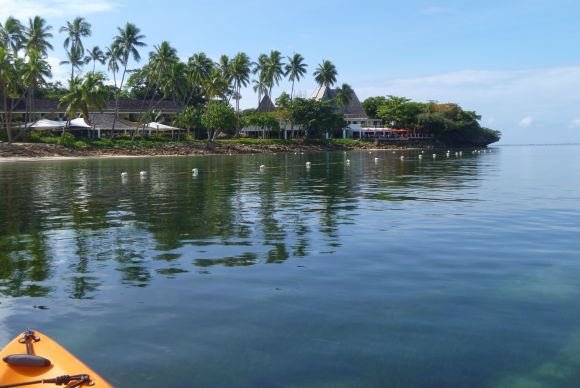 The Shangri-La Fijian Resort from the water

I’d taken my family to Fiji for a Christmas break, where we were staying in a resort nestled amongst the forest on a tiny island separated from the mainland by a coral lagoon. After a few days of R&R and a disasterous test paddle on a tiny single Sit On Top, I decided it was time for a little paddling adventure.

I signed in at the water sports hut and made my way to the water. I decided to take a double kayak out as a single in the hope it would work better for me – on my previous paddle the short single SOT I tried would spin 90 degrees or more with each stroke I took, so I hoped the extra length would help with tracking.  I also chose the most primitive paddle they had, because it was unfeathered like my Greenland paddle. On the previous day I’d chosed the paddle that looked the most modern but had been driven mad by its 90 degree feather! 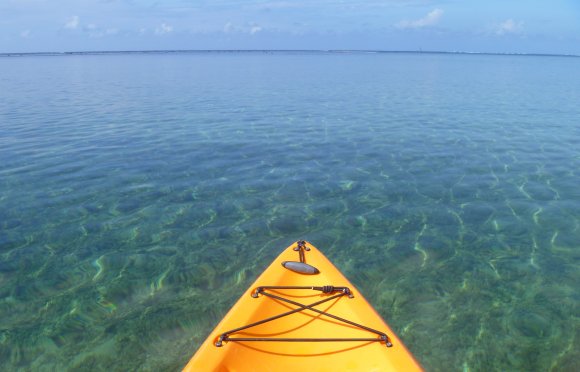 Paddling across the coral lagoon, heading to open sea

Straddling the double SOT in the middle, I pushed off and head straight out across the lagoon, heading towards the breaking surf on the outer edges of the reef. The longer boat and unfeathered paddle worked remarkedly well together and soon I was working up a decent pace in the wide boat. Before I knew it I was approaching the edges of the coral reef and crashing surf, so I steered away and into a deep channel that major boats used to enter the lagoon. With that I was at sea, riding the Pacific Ocean swell along the coast line.

Before long I spied a deserted beach on the mainland and pushed on towards it. There was significant reef blocking the way but I had just enough water to paddle across the top of it, riding small swells that were rolling across the reef plateau. Then a freakish wave broke behind me, picking up the kayak and hurling it at speed as I toppled backwards into the rear cockpit area! 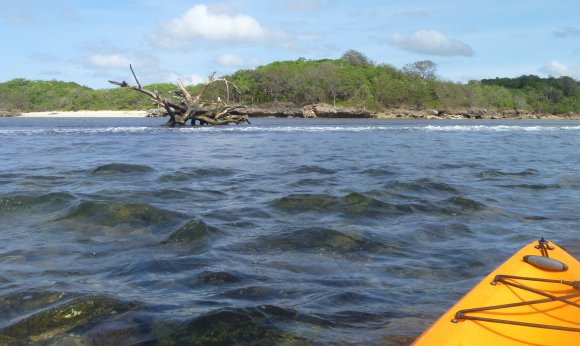 Coming into the beach, literally seconds before the breaking wave crashed behind me 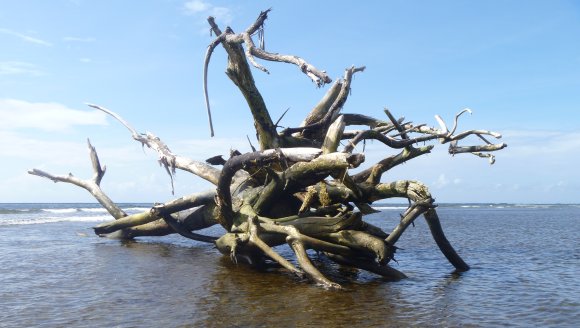 I washed in next to this piece of "driftwood" on the reef. It was the size of a bus!

Eventually I coasted in through the coral and onto the beach, as small crabs scattered sideways in all directions, leaving the sandy beach completely deserted. I got out and quickly explored before having a relaxing break under the hot Fijian sun. 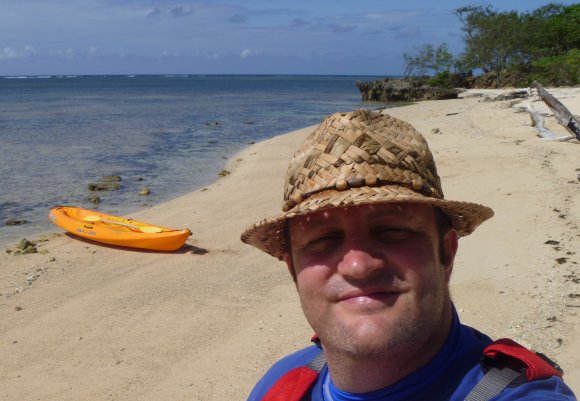 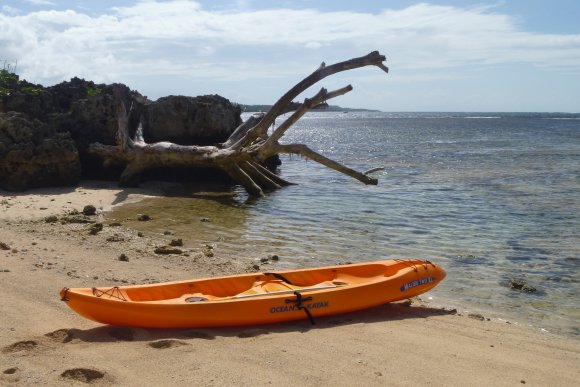 My kayak for the day - the Malibu 2XL. Made quite a reasonable single kayak

I mucked around with my camera for a while (a Panasonic Lumix FT10 that I had borrowed), setting up the timer and attempting to get a decent shot of myself. As I did I noticed a boat cruising outside the reach with two Fijians on board staring at me. They cruised backwards and forwards for a bit before turning away and heading back into the reserve, and I wondered if perhaps I’d done something I shouldn’t. With that sobering thought, I returned to the kayak and pushed it off the beach and back out to the reef ready for the trip back. 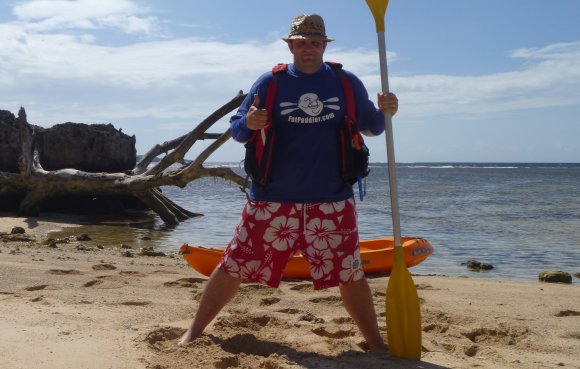 The FP, Loud and Proud, on a remote beach in the South Pacific

Of course I’d made a pretty stupid mistake, in that the tide was going out and there now wasn’t enough clearance over the reef to get back out. I had no desire to disturb the reef by walking across it, but with the tide pulling away I’d risk being stuck on the beach until after dark. To make matters worse, I didn’t have any shoes either, and in the end had no choice than to walk the kayak 100 metres across the reef barefoot to get to deeper water.

When I finally got there, I had to negotiate a jump start through breaking waves, and all whilst trying to nurse my now cut and sore feet. I somehow managed to get the boat and myself through the break and into open water, where the wind had whipped up some nice splashy chop for me to paddle across. 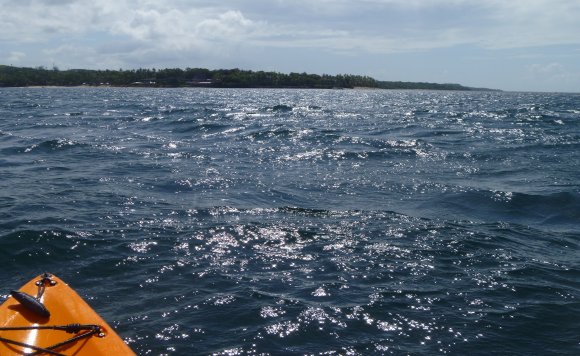 Off the reef and back into open waters

As the water crashed over the bow of the kayak, I grinned and laughed at the sheer enjoyment of the paddle. That laughter turned to concern however as a 20  foot motorboat pulling a parasail cruised straight at the kayak, its Fijian drivers calling out “Bula!” but its onboard tourists shouting abuse at me about getting out of their way. The Fijian capain kept his eye on the parasail above and within seconds the boat had collided side-on with my kayak. With a bit of a push I was able to keep the boat upright and continue my way into the beach. 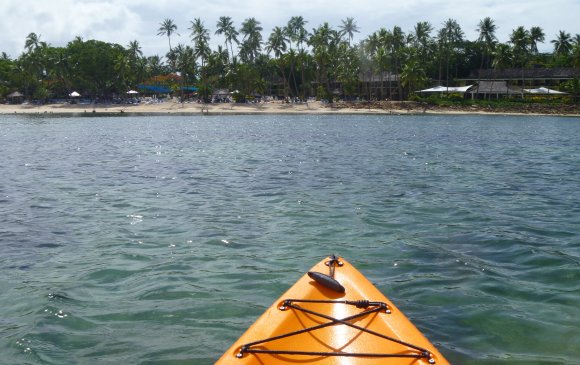 Finally back in calmer waters with the resort now in view 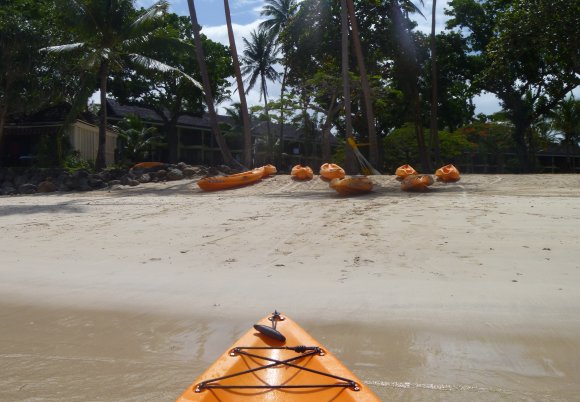 Back on the beach at last, nearly three hours since I'd left

When I finally returned, I walked up the counter to sign myself back in. The older Fijian lady immediately got stuck into me once she recognised who I was.

“You’re only allowed the boat for 30mins” she exclaimed.

“But yesterday you told me I could pay for anything after that?” I responded.

“You can’t go past the poles with the kayak!” she yelled, pointing at channel markers a mere 100 metres away.

“Where does it say that?” I reply, “I don’t see anything saying that?”.

“You can’t take the kayak out of the lagoon!!” she yells even more angrily, as I realise she’s getting seriously worked up.

At this point I realised I’d pushed this Fijian to the brink, so I did what any self-respecting tourist does under the circumstances – I offered to pay something. But the woman was horrified at the suggestion and instead calmed down, laughed, and said don’t worry about it. And with that, she was fine again – the Fijian rage had lasted all of about 45 seconds! 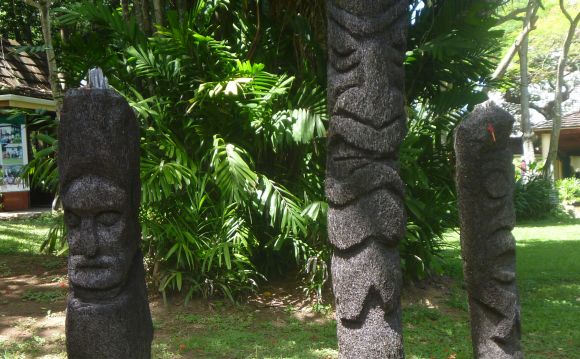 For the rest of the day I took it easy, staying well away from the kayaks and concentrating on other activities that would cause the locals less pain. Like fire dancing – haha!! Needless to say there’s always more to do when you’re in Fiji. Cheers – FP

2 thoughts on “A Tropical Adventure – How to Anger a Fijian”