A Chance Meeting with Andre Janecki and his new sea kayak design, the Hybrid 550

Andre in his new sea kayak design, the Hybrid 550

After recently leading Team Fat Paddler on a mission out at sea, we snuck back into the Harbour and  stopped in at Watsons Bay for a sneaky coffee break. Whilst enjoying my coffee I spied some distance away a paddler inspecting a rather sexy looking kayak out in a few metres of water. Looking closely, I spied an interesting design feature of the boat, an integrated rudder much like a Mirage but with a quite radical angle to it. The only boat that came to mind was the newly designed and released Hybrid 550, a boat that had only months before been released to the public, so I jumped back into my boat and paddled over for a closer look. When I got there I found the boats designer, Andre Janecki, flipping the boat from side to side and generally having a  blast. 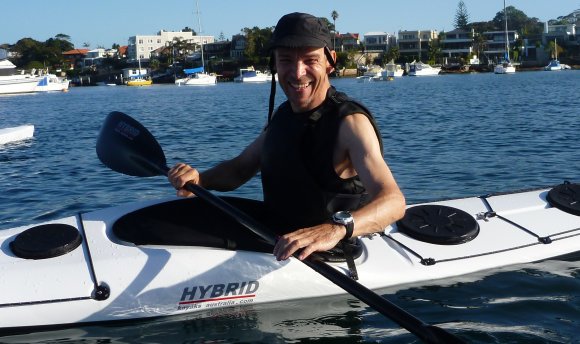 Andre Janecki - more smiles than a room full of kids at Christmas!

Andre kindly let me have a good look at the Hybrid 550 and explained first hand the many design features he’d added to the boat. These included the radical cockpit design with raised sides offering heaps of room for big legs as well as creating a more stable platform on edge, the hull shaping he’d done under the waterline to improve handling on big seas, and of course the interesting integrated rudder which digs in the back of the boat and lifts the bow when needed amongst the waves. Of course a designer I am not, but his energetic enthusiasm for design innovation left me feeling inspired and curious to see more of what the boat could do. With that, Andre put the boat through its paces, flipping it from side to side to demonstrate it’s incredible primary and secondary stability characteristics.

With all of the Team Fat Paddler lads now ridiculously impressed, we talked a little more about his aims for the boat, which are fundamentally to help raise money and awareness for another of Andre’s projects, the “Unlimited“. This is a personal design project that Andre has been leading for many years, to design and produce a recreational kayak for double-leg amputees and paraplegics. Andre has designed an award winning craft but desperately needs funding to get prototypes built for testing. So for the bankers, CEOs and major charities out there who may be interested in supporting this worthy project, drop me an email and I’ll make sure it gets through to Andre. 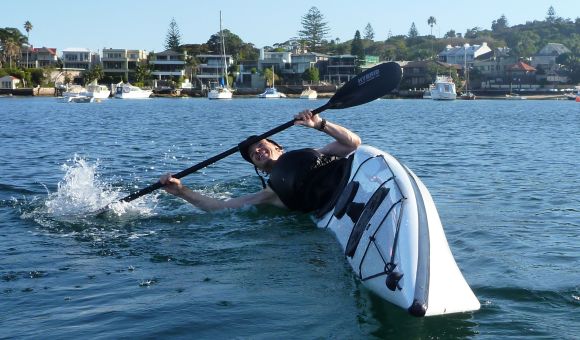 I get the impression Andre is having TOO much fun with this boat! Over he goes again... 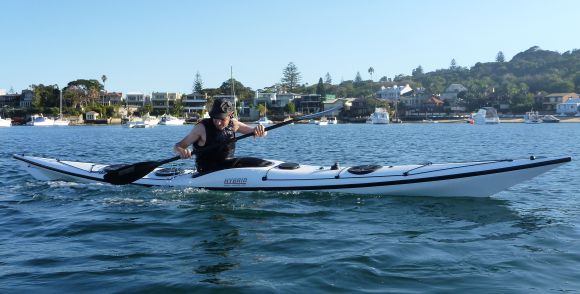 ...and then straight back up again. Nice work Andre!

Whether or not you’re interested in this unique sea kayak or in Andre’s Unlimited project, the one thing you have to say is that his enthusiasm for paddling is absolutely inspirational.  It was truly wonderful to see a paddler out there with a grin from ear to ear having so much fun out on the water. I truly wish him loads of success in his boat designing ventures. Cheers – FP

2 thoughts on “A Chance Meeting with Andre Janecki and his new sea kayak design, the Hybrid 550”