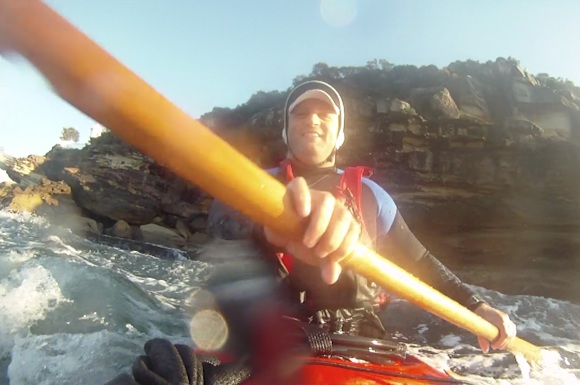 Could there be anything more fun than bouncing around in froth and rocks??

Last weekend I hit the water with Sydney paddler Mike, a random fella I met via the FatPaddler.com Facebook page.  I didn’t know much about him other than he’d paddled flat water for a number of years, had only the weekend before paddled across the water between the Heads for his first taste of the lumpy stuff, and that he was planning on doing his first Hawkesbury Canoe Classic later in the year.

When he pulled up at Sydney Harbour Kayaks his choice of boat – a Tsunami 165 – had me instantly excited. It was plastic, it was short, and it had scratches! Here was a paddler with a boat made to get bashed up on rocks, so I made the snap decision to offer him my spare helmet.  Of course I nearly cracked up laughing when I saw the look of fear cross his face, but before he had a chance to say no I blurted out,

“Take it with you anyway. There’s no pressure from me to do anything you don’t want to do. That being said, it’ll be better to have it with you if you DO want to get amongst it, than finding you can’t because you didn’t bring it”.

With that he mumbled a yes and I quickly strapped it to his deck before he changed his mind. Then we pushed off into the channel under a beautiful early morning sun.

It wasn’t long before Mike asked about my Greenland paddle. I suspected this might happen so I’d brought two spares with me, and he readily accepted one for a trial. At first he was pretty doubtful about it and as we made our way along the shoreline of Hunter’s Bay he asked me a thousand questions. After a kilometre or so he seemed to be getting the hang of it before his attention was drawn to a pair of Little Penguins from the nearby Manly colony fishing for breakfast. We watched them frolic before finally arriving at Grotto Point. 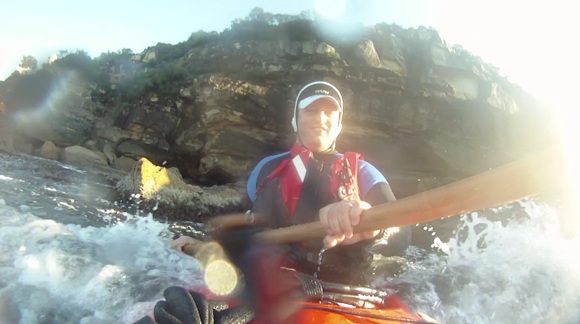 C'mon Mikey, it's easy! Look how much fun I'm having, come on in!

The weather was perfect for some basic rock gardening. With 2 foot swell the wave action was tiny, but an occasional 4 footer would roll in and break over the rocks and into my kayak. I played around for a few minutes before paddling back out to Mike. With a slightly nervous look, he reached for his helmet and I knew it was on! 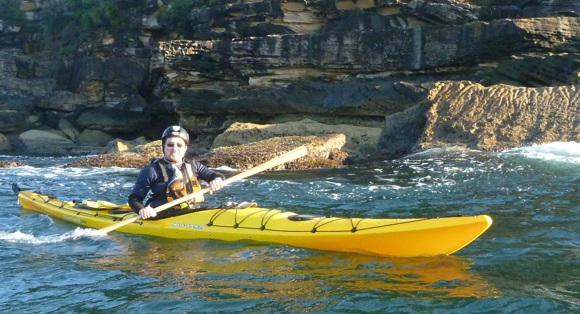 With helmet in place, Mike was ready for his first taste of lumps and rock. Woohoo!

Mike eased his boat into the the little rock garden backwards and braced for the first few little waves. He quickly learnt how his boat rode over the swell, bracing and adjusting his position with the paddle. Then a few bigger waves came in and broke on us, and out of the corner of my eye I saw a slow grin start to spread across his face. Rather than being scared, he was loving the excitement of the whitewater, and I knew I had him convinced. For the next ten minutes we bounced around and had a good laugh at all the fun we were having. 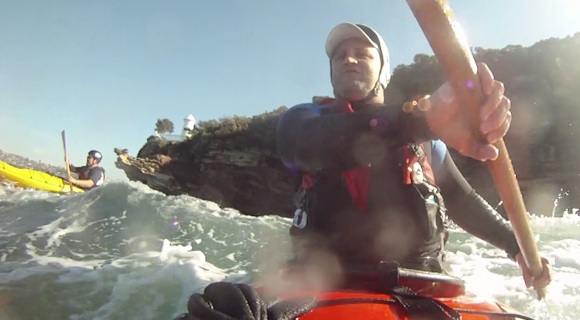 Next I took him around the corner to the nearby beach and then on to the cliffs of Grotto Point Reserve. By now he had the hang of the Greenland paddle and seemed to be really enjoying using it. We played about in the rocks and the gauntlet near Dobroyd Point before paddling around to the first little beach by Manly for a break and a swim. 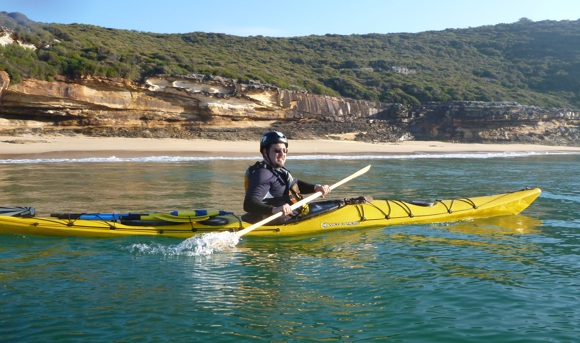 A tough morning's paddle in paradise.

As I took a refreshing swim in the cold early morning waters, Mike mentioned he was going to do a rolling class the following week. He’d yet to even do a wet exit, let alone any of the skills usually needed to roll, so I offered to help him get the feeling of being underwater whilst still having someone to heave him back up. Clearly I’m no rolling expert or teacher and made that very clear to him, but if he wanted to feel what it was like to go under, I’d help.

He readily agreed and we soon tipped him upside down, before hauling him back up again, giggling. He was now pretty adamant about wanting to try rolling, so I handed him a Greenland paddle and said I’d tip him in before guiding him and the paddle through a layback roll. After putting him into a balance brace first to get the idea of body position, I took him through a couple of simulated rolls. He was keen to give it a go on his own, so I stood back and let him try. First roll he failed and fell back in, so I hauled his boat back up. Second try he again failed and rolled under before I rescued him again. We talked through a few technical details before his third attempt, and BINGO, he managed a full roll without any help at all. We both had a bit of a laugh and a yell at his success before he insisted on trying a few more on his own – where he quickly got to experience his first wet exit – haha! 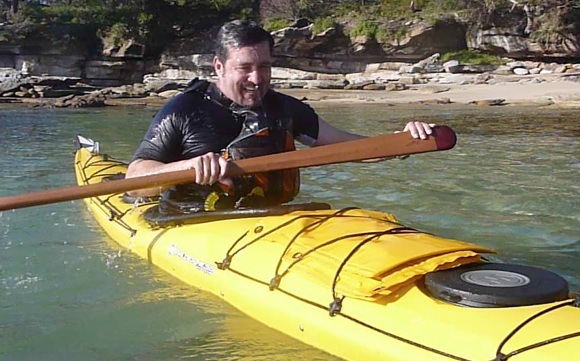 That is the face of one very wet and happy paddler

We finally pushed back out and returned to the rock gardens, when Mike now followed me into somewhat more challenging rocks and gauntlets. Clearly he was loving it and couldn’t get the grin off his face. After a final play in the rock gardens at Grotto Point, we made our way back to The Spit for the obligatory egg & bacon roll, coffee and story-telling by the water!

The day was a fun one. For me, it was just awesome to get small enough conditions to allow a newbie to experience rocks first hand within the right levels of safety. To see a long-term flat water paddler relish waves and rocks and froth was brilliant, and even Mike himself conceded it would be hard to return to river paddling after such a day. His willingness to try new things impressed me a lot and I think he’s real candidate to join Team Fat Paddler as a regular member of the crew. We’ll have to see what else we can throw at him now to test him out – haha!

Lastly, I put together a little video showing what it takes for me to get to the Harbour, and then a few shots of Mike and I enjoying the water. The music is Aussie hip-hop and does have some course language in it – so turn it down if the kids are around. Enjoy! Cheers – FP

P.S. Mike wrote up his account of the day on his own blog – go and have a read, it’s pretty cool.

The Riddler Gets An Introduction to Rock Gardening

4 thoughts on “An introduction to paddling fun, Fat Paddler styles”