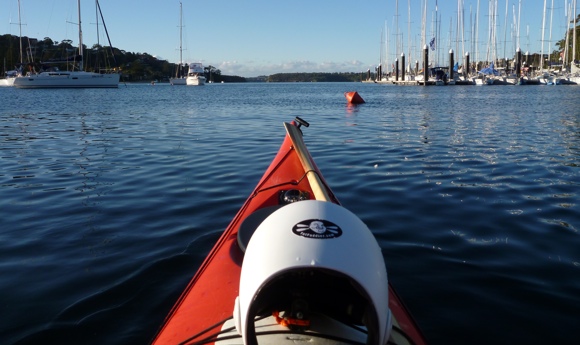 Looks glassy at The Spit, where it's protected from the wind. Not for long!

With helmets in hand Gelo and I converged on the lawn of Sydney Harbour Kayaks ready to seek out surf and some fun in the rocks. The weather told a pretty bad story though – small swell (1 metre), 30+ knot WSW winds, with gusts around 40 knots. The likelihood of surf existing in those conditions are practically nil, but ever optimistic, we set off for Grotto Point looking for fun. 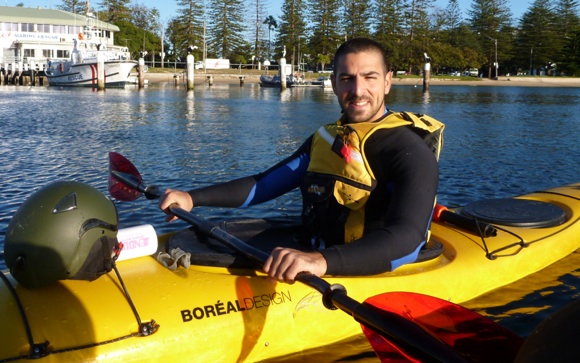 Gelo, all set for some action. And hoping to shake off his hangover...

Leaving the calm waters of The Spit, we entered the blow zone, with a roaring wind whipping up the water and sending spray flying across the surface of the Harbour. As we approached Grotto Point we pulled our helmets on but clearly any surf that might have existed was being blown to pieces by the ridiculously strong winds howling around the headland. We meandered around the rocks, looking for something to play with, but the breaking water and wind was making the whole zone pretty ugly to be around.

In the hopes of seeking some shelter from the wind, we paddled off through the chop towards Middle Head. There were some belting waves rolling in but they were sucking up dry over rocks – not really an area we wanted to try our luck in. And furthermore, the wind was hammering us as the outgoing tide dragged us out into deeper waters and towards the Heads. If anything this was worse than Grotto Point, but not wanting to give up we turned around and started paddling for the cliffs of Grotto Point Reserve.

Then Gelo yelled out across the wind, “Dolphins!”. I turned, desperate to see these beautiful animals, something I’ve never actually seen whilst in a kayak. In the waves and wind all I could make out was some splashing that looked like waves breaking on reef – but the breaking water was in the middle of the deep channel of the sound, and I slowly realised it was a pod of around a dozen dolphins breaking the surface for air. 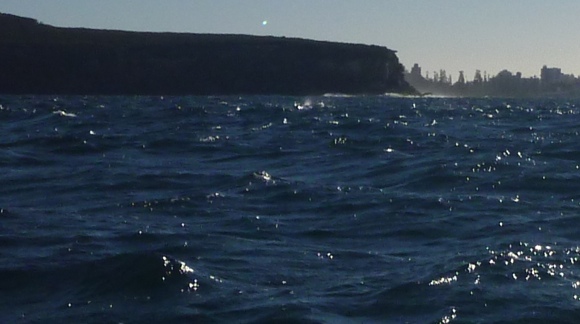 Fumbling with the camera, I hit the video button and then watched as the pod belted along directly at as in full flight, launching themselves out of the water as they did so. We stared in awe as these beautiful marine animals, spread out across a front of about 15 metres, quickly closing at a pace that suggested they were going to collide with us at any second. But with about 15 metres to go they deviated slightly and passed me off to starboard, which is when I made the horror discovery that I hadn’t actually hit the video camera button at all!!!

Gelo whooped and hollered as I just stared after them stony-faced. I was ecstatic at having seen them, but completely gutted that I’d fumbled with the camera and couldn’t share what we’d seen. Fortunately, the backwards-facing GoPro captured them surfacing behind my kayak, so I could at least prove we’d really seen them!

For the next hour or two we paddled about looking for something to do, but no matter where we went, the wind was oppressive and only the stories of our amazing dolphin sighting kept us amused. We tried the Grotto cliffs, we pulled into the beach nearby looking for a wave, before finally striking out directly into the ridiculous wind for the ride home to hot coffee and an egg & bacon roll for breakfast! 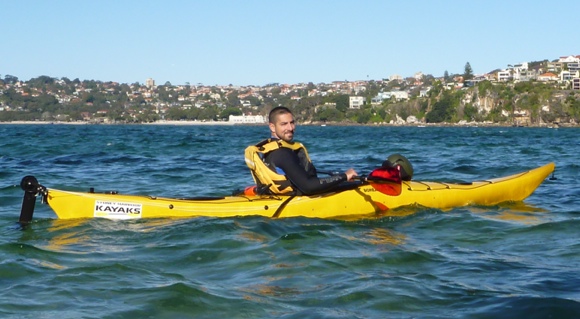 Finally out of the wind for a breather! 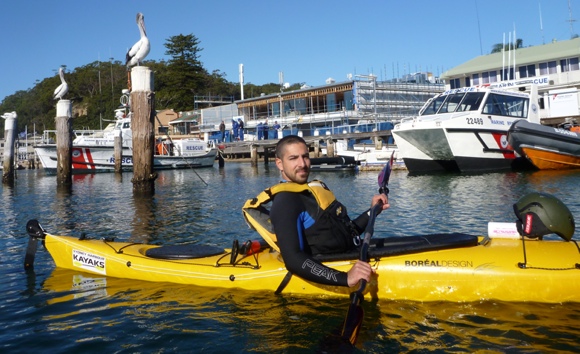 As usual, Gelo could be found hanging out with a few birds

Ohh, and as for proof of the dolphins? You’ll just have to watch this short video of our paddle and see if you can find them in there. Cheers! – FP