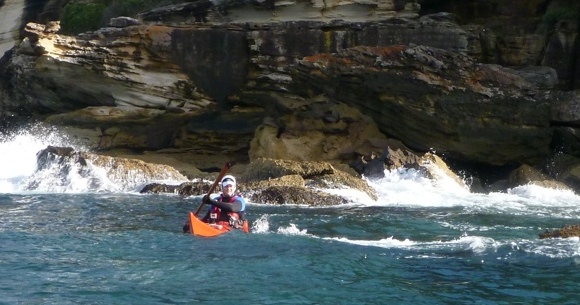 There's something awesome about rock gardens. But they can be painful too!

It started off well. Mike, Lt. Gelo and I met at Sydney Harbour Kayaks at the start of a magnificent Saturday morning. We kitted up in protective gear – wetsuits, booties, helmets etc – and set off for Grotto Point looking for some fun in either surf or rocks. The weather report for the morning looked great (seas a little under a metre and 13knts of wind) and we couldn’t wait to get amongst it. 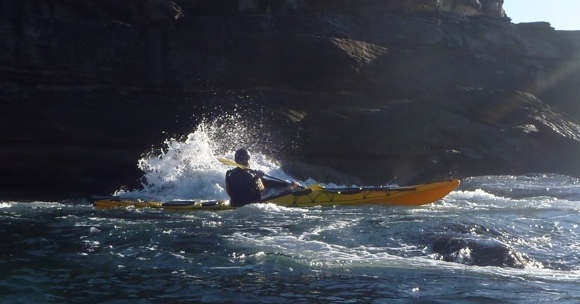 Mike in his new helmet and wetsuit looked more like a Navy SEAL than a paddler!

But beware of enthusiasm! When we arrived at Grotto Point the seas were slight and the rocks looked inviting, and I zoomed ahead of the others and made straight for our usual starting rock garden, riding a small wave in before jamming the paddle into the drink to bring me sliding in behind a good sized rock. At this point I felt excited to be in the zone and looking forward to the fun about to commence. What I didn’t do however was look over my shoulder to see what might be behind me, because at that exact moment a big once-an-hour bommy sucked the water out from behind the rock, dropping me down a couple of feet right in its lee, before jacking up and crashing over the rock itself.

Of course I didn’t have time to take much of this in. All I knew was that I had suddenly dropped, and in that split second of realisation, spun my head around at the exact moment a wall of water crashed over the rock directly into my face. 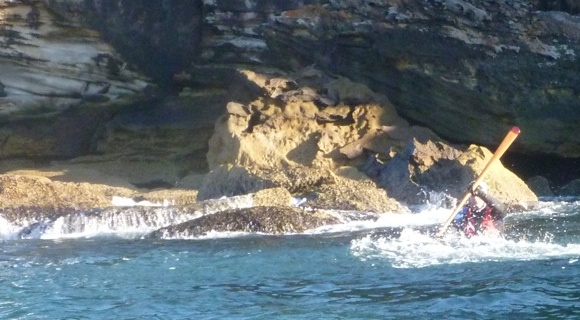 At the moment of impact I threw my weight and paddle into the wave, expecting it to carry me side-surfing into the rocks behind me. Instead I seemed to burst through the wave and was now leaning and bracing in exactly the wrong direction to stay upright, and rolling down the back of the wave toppled over and past the point of no return.

Everything slowed down as I teetered on the very edge for a split second, then as I started to roll my paddle hit rocks below me, and my first thought was to prop myself up with my paddle. However another wave sucked the water out from below and I toppled upside down and under the water, landing head first on the rocks below. As the next wave rolled over me, it picked me up (still upside down) for the briefest of moments, before slamming me back down onto the rocks. 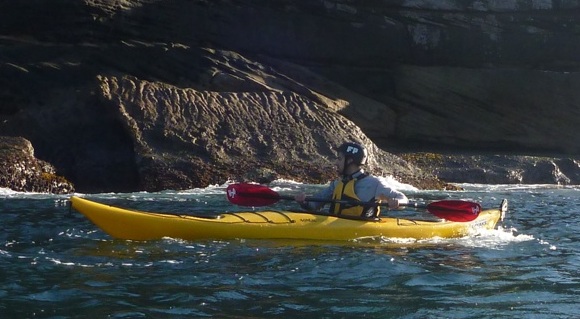 Lt. Gelo could hardly hide his satisfaction that it wasn't him being smashed against rocks this time

Despite the pounding I was getting on the rocks whilst upside down and locked in my kayak, I was amazed at just how calm I was. I’ve never tried to roll in a combat situation before but, as I peered through the frothy green water around me, I figured that now might be a good time to start. I quickly setup for the roll but again I was smashed down and pinned against the rocks below me – I now couldn’t move my body at all, let alone my paddle.  Still, as my boat got picked up by the next wave I started to sweep out for the roll when my skirt and legs were ripped from the boat and I emerged at the surface, paddle in hand but out of the boat. 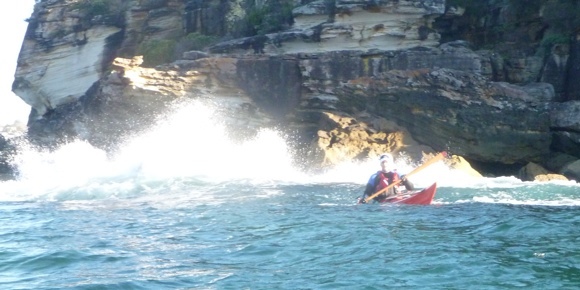 The water looks soft and frothy, but as I discovered, it hits the rock with force!

The first thing that hit me was the next wave, smashing me against my boat which was rapidly filling with water. I slipped my paddle under the bungees and dragged the boat around facing the oncoming waves. The big rock was still between me and the safety of deeper water, and I was keen to get the boat out of the way, so as the next wave poured over the rock I launched my boat nose first into the wave, over the rock and out towards Gelo and Mike.

Now I had the problem of getting past the rock myself so I could swim to safety. Sometimes I could stand on the rocks below, other times I couldn’t, so as the next wave came in I launched myself onto the back of the rock, scrabbling up to its top.  As I perched there I realised how vulnerable I was, as the next wave hit and swept me off it backwards (I’m sure I heard Lt. Gelo laughing at this point!).  I climbed it again on the next wave and then launched myself immediately off it, thankfully into a lull between waves where I was able to swim out to Mike and Gelo who were now holding my boat. 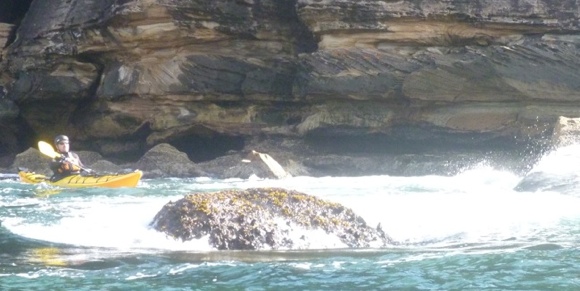 When I got to the boat I took stock of the situation. I looked to see how far we were from the rocks, and helped by the outgoing tide, realised they were no longer a danger. Then I took stock of my own physical condition – the wetsuit was keeping me warm, but my right shoulder felt like it had been run over by a truck. I wondered if it might be dislocated but it seemed to have a full range of movement so I put that thought out of my head.

Next was talking Mike through his first assisted rescue. He dutifully followed my instructions, emptying my boat of water and then steadying it for me to climb back aboard. I think he was amazed at how quick the rescue happened, and within a few minutes I was back in the boat sucking in some deep breaths to recover from the ordeal. I also realised at this point that I hadn’t turned the video camera on and had missed the entire episode (again!!).

If there’s anything I’ve learnt from my many ordeals it’s that sometimes you need to get straight back on the horse to ensure fear doesn’t keep you in its grip later on. I looked at the rock garden, and that big bloody rock in the middle, and knew I had to get back in there and beat it, so I pushed off from the boys and charged straight back in, this time keeping a closer eye on what the waves were doing around me. 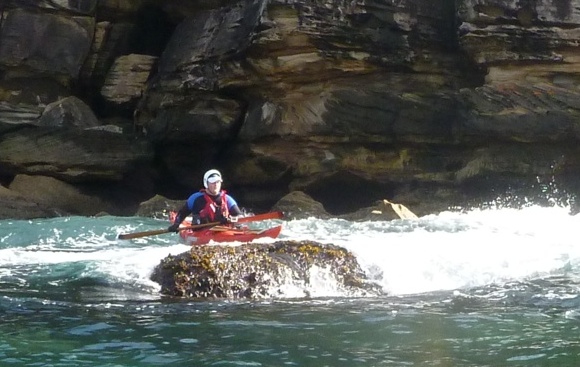 Ok rock, you haven't beaten me yet. Bring it! 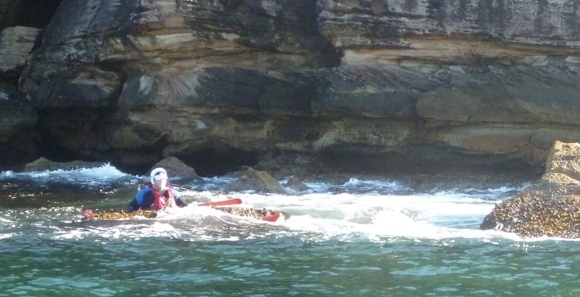 And then punching in through the wave and over the rock. Owned!

For the rest of the morning we played without incident. We bounced around in rock gardens, paddled the Grotto Reserve cliffs for a while, and sat off the Dobroyd bombora watching it’s awesome tubes in the southerly swell. Then we head back to the rock garden for a last play before starting the calmer trip home.

On the way back a couple more things happened. First we met Terry in his magnificent Skin On Frame kayak, complete with home-made Greenland paddles. We stopped for a lengthy chat on the boats he’d built and how they performed in various conditions before he set off again. Then as luck would have it Garry arrived in the coffee boat, allowing us to stop and drink fresh frothy coffees by the edge of the rock gardens we’d played in earlier – brilliant! 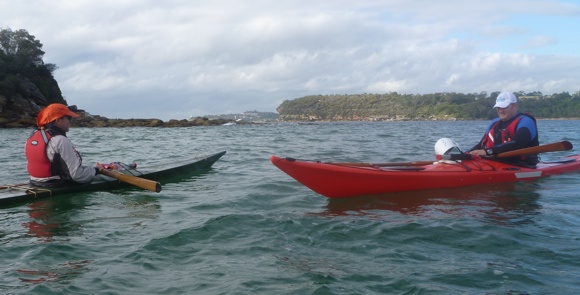 Terry and his SOT kayak and Greenland paddle. Beautiful! 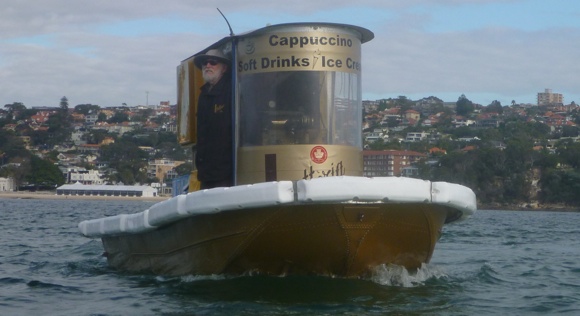 When we got back I had time to think about what had happened. How should I have reacted differently, what should I have done to keep myself in my boat, what did I do when I swum to safety that might have been done better. Instruction and reading is all important when developing skills and knowledge, but there’s a lot to be said for learning from experience. And importantly, it’s far better to have friends around to help you if you do run into trouble. 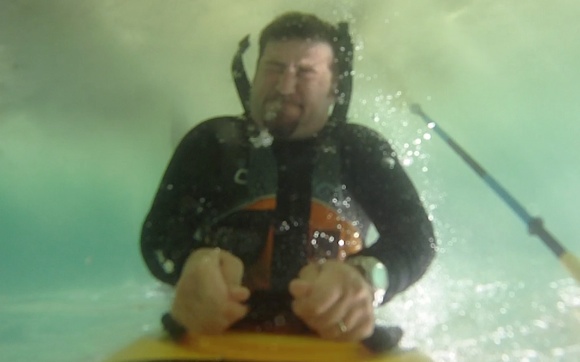 Until the next adventure – stay safe, but have fun! Cheers – FP

12 thoughts on “Rock Gardens are like the Ocean, never turn your back on them – a painful lesson for Fat Paddler”