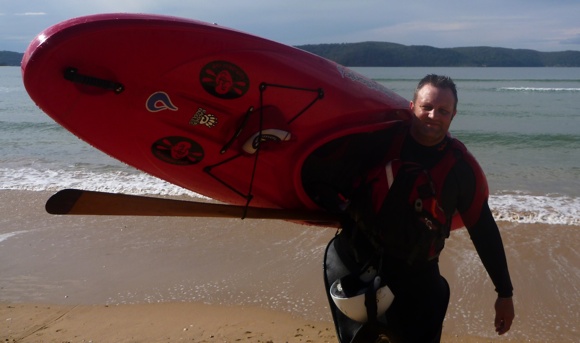 Now this is relaxing. A deserted beach, a kayak and hours to waste. Bliss!

Due to speaking and press commitments, I took a week or so off work to launch my book, The Fat Paddler. Fortunately most days had a window of opportunity for some fun, and I chose to use that daily time to get out on the water. For the first few days I took my new whitewater boat, the Liquidlogic Remix XP10, out onto the Harbour to test her in ferry wake. After being amazed at how much fun the little boat could be in bumps, I decided to start pushing her out into rock gardens.

Fellow TFP member Lt Nat also found himself with a bit of spare time on his hands this week and joined me for a paddle along Gelo Cliffs. He got a good laugh as I bounced my boat across rocks and into the cliffs, but I could also see a little longing in his eyes, and soon he was edging his ski closer and closer into the lumpy stuff. 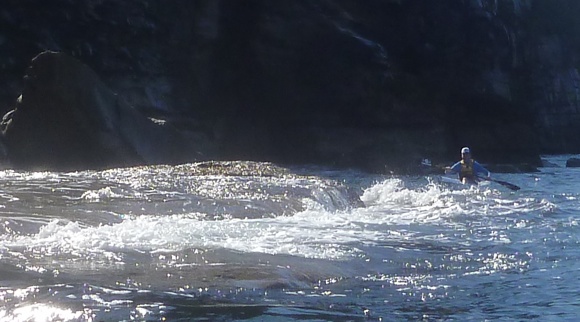 Nat gets his ski up close and dirty to Gelo Cliffs. Risky, but lots of fun!

Sydney had recently copped a few weeks of monstrous swell and we discovered that the beach to the north of Grotto Point had been completely removed, replaced by a brand new rock garden and set of cliffs. I explored this area and found an awesome L-shaped rock chamber with a couple of entry/exit points in the rock, which bubbled and frothed as the surge moved backwards and forwards through it. I waited for the right timing and then rode a surge in through a narrow opening and into the chamber itself. Nat had continued paddling and lost sight of me, just as I discovered I couldn’t quite get back out of the chamber because the enclosed space was amplifying the surge and waves into a maelstrom of rebound, white water and even a crazy whirlpool in an eddy behind one of the bigger rocks. Like a table tennis ball, I got bounced around inside the rocks for what seemed an eternity until finally I broke free of the whirlpool on an outwards surge and paddled my way back out to open water. The craziness of it all had me absolutely exhilarated and when I finally caught up with Nat I had a smile from ear to ear that couldn’t be removed! 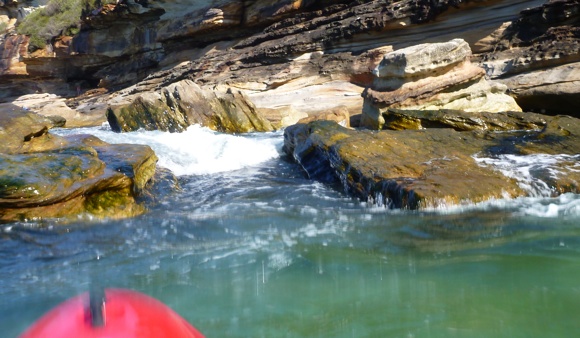 One of the ways into the chamber, which curled around to the right and back along the cliff behind the rocks 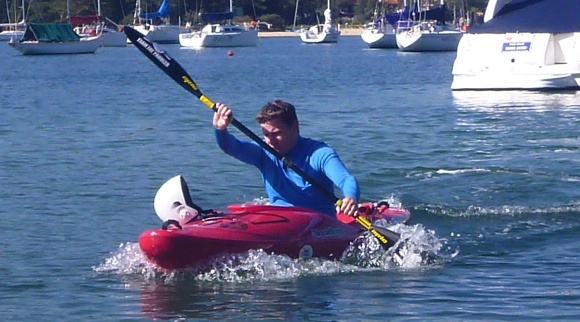 Even Nat wanted to try out the Remix, and conceded post-paddle that even he may find himself wanting one

Later in the week I made a snap decision to take my family on a little surprise trip out of Sydney. I hired a small cabin on the beach at Umina just to the north of Sydney, packed my wife and girls into the car and we took off for a few relaxing days together. Once there, my kids embraced the beach and had a ball playing in the sand, whilst my wife slowly unwound and relished doing as little as possible. Of course, I had also brought a boat with me, just in case I found the time for a spot of paddling (naturally!). 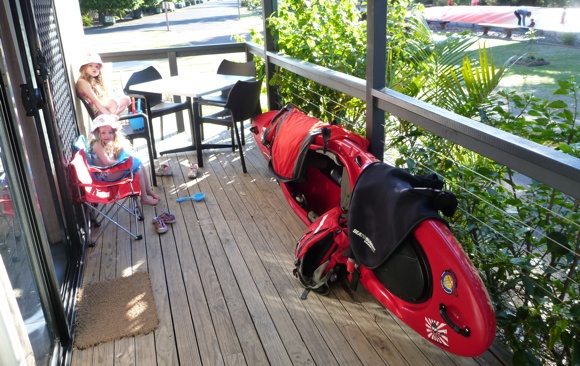 My daughters all set for some beach time. Oh look, a kayak is there too. How convenient!

The conditions there were almost dead calm, but the beach had a lovely clean little 1 foot break with perfect shapes for surfing. I took the Remix out into the “break” and there proceeded to catch dozens and dozens of waves with her. Considering how small the surf was, I was astounded at how well the little whitewater boat could surf. A ridiculous amount of fun!! 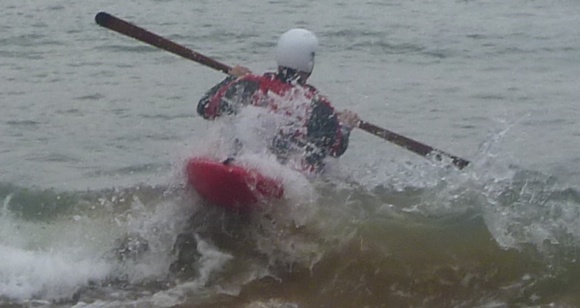 Some crazy dude with a whitewater boat, a surf helmet and a Greenland paddle 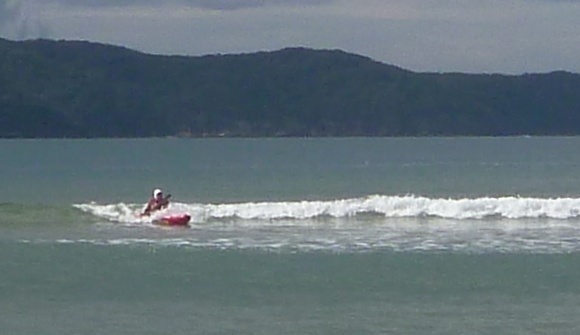 Over three days I must have caught well over 100 little waves. A fun way to learn about the boat.

Of course nothing with me is ever perfect. On the last day I caught a rare good sized wave (maybe 3-4 foot max) that I surfed beautifully but was caught out when we hit another sand bank and the wave suddenly picked me up and dumped me head first. In the impact I re-opened an old injury when I tore my tricep a touch, creating a fair bit of pain but not enough to make me go in. I also had a passing member of the sea kayak brigade  make some sort of snide remark about my kayak along the lines of “nice toy”. Clearly they thought they were paddling an ambulance or a commercial vehicle or something if they felt their sea kayak wasn’t a toy itself, but what can I say – you can’t please everyone. 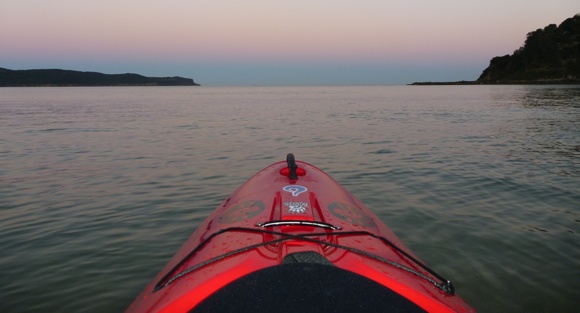 Paddling right up until sunset. Then sundowner time. 😉

Needless to say I paddled almost everyday and after an incredibly stressful year of work and book preparation, it was exactly what the doctor ordered. Now I’m recharged and ready to fire up for the rest of the year. Yeeehaw! Cheers – FP