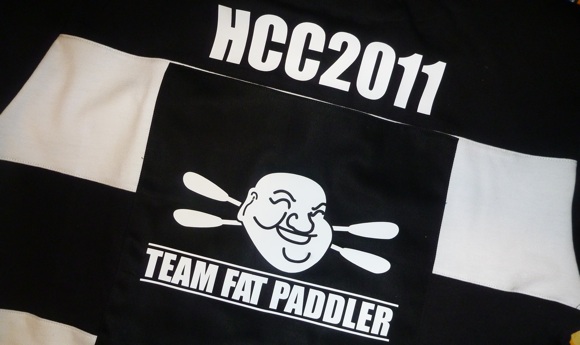 Back in 2009 when I first set a goal to do the Hawkesbury Canoe Classic, it was a very personal journey. Since that time my journey has expanded to take in others, leading to the creation of Team Fat Paddler, a group of friends who embrace the core principles of inclusion, fun and charity. Together we’ve paddled, camped, surfed, had bbqs, eaten egg & bacon rolls, shared boats, rescued each other, gone swimming, jumped pits of fire and swam through pits of mud. Sometimes we’ve smashed ourselves up, taken rides in ambulances and bled together. Other times we’ve just caught up for a feed. But always, we’ve remained good friends, and raised many thousands of dollars for charity.

In 2010 the Team Fat Paddler entry in the Classic doubled in size from one paddler to two. In 2011 however we’ve grown to ten paddlers surrounded by even more landcrew. These hard men, the “Tenacious Ten”, have been training for many months for this hardcore ultra-marathon, as well as raising money for the Arrow Bone Marrow Foundation and research into a cure for Leukaemia. So I wanted to introduce you to the Tenacious Ten, as well as showing a little footage from past Team Fat Paddler outings. Enjoy, and maybe see you out on the river. Cheers, FP