So Cal Kayakers at the Redondo Beach Marina - John, Gennifer and Sharon

On my recent trip to Canada and the USA, I was fortunate enough to stop over in the city of Los Angeles for day between flights. I was able to contact local paddler Blake Lane who put on a paddle for me with his crew from the So Cal Sea Kayaking group, supplying boat (P&H Delphin), paddle (Greenland of course) and good paddling company! We met up at the Redondo beach marina before paddling a half a mile or so out to sea, before turning south and heading for the rocky outcrop that is the Palos Verdes peninsula. 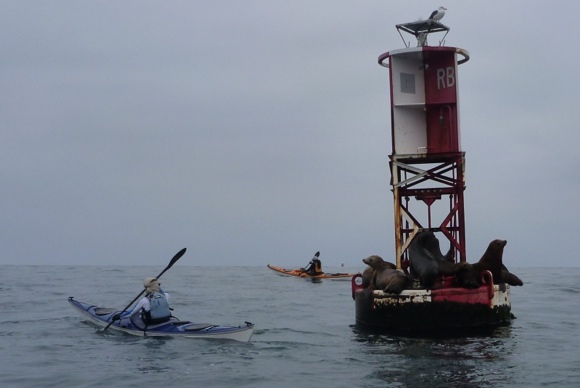 The paddle down the coast told me a few things. Firstly, all of the other paddlers were in fast, long composite boats (mostly Valley Aquanauts), whilst I was in a 15′ plastic rock garden boat with a Greenland paddle, which meant I had to work twice as hard to keep up. Secondly, despite being a fair way out to sea, the water was glassy and almost eerie in it’s calmness. And thirdly, that paddling through kelp forests is both difficult and mesmerising as the giant matt of seaweed dampens the ocean swell, creating surface movement mimicking that of a waterbed!

So Cal paddler and Fat Paddler candidate Louai kept me laughing (and fed!)

Struggling through the kelp beds to the cliffs of Palos Verdes

When we finally got to the cliffs I was mesmerised by the rock gardens there. I’d brought my helmet and protective gear with me to LA but Blake had assured me I wouldn’t need them. Now I was kicking myself for having left them all in the car, and as swell cut through the kelp and broke into the jagged rocks, I dreamt of bouncing around in there as well. Then as I was watching, a lone paddler in a bright yellow kayak zipped out of the rocks, bouncing around in the rebound and relishing the dynamic water. Paddling over to us, he introduced himself as Jack, a local paddler well known for playing amongst all the rock gardens of this particular coastline. 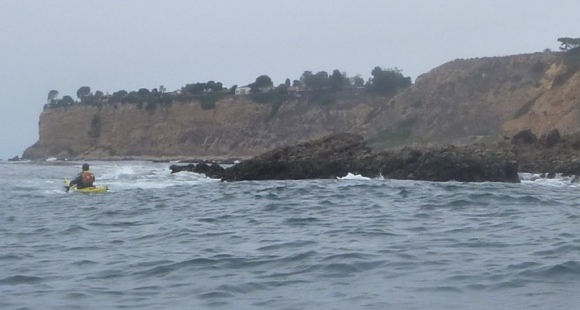 I sat mesmerised, watching the swell moving in and out of the Palos Verdes rocks

As we continued on down the coast, Jack took off back into the rocks, whilst the rest of us stayed a few hundred metres offshore. He continued to play until we found a protected bay to pull into for a break and a feed. One of the So Cal paddlers Louai keep us well nourished with Middle Eastern snacks and sweetened tea lovingly packed by his wife (seriously, it was awesome), as we chatted and joked on the shores of this famous rocky peninsula (previously used in the filming of the movie Pirates of the Caribbean). 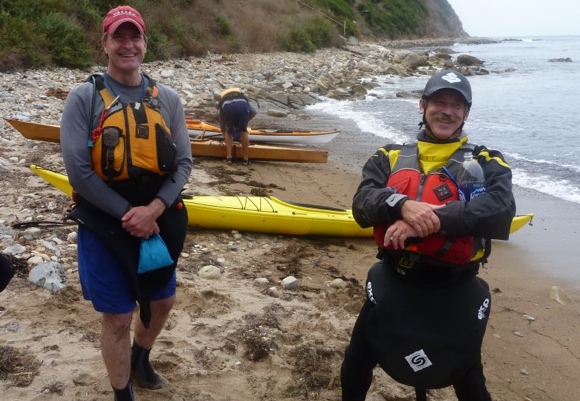 John and local rock gardener Jack, telling stories and having a good laugh 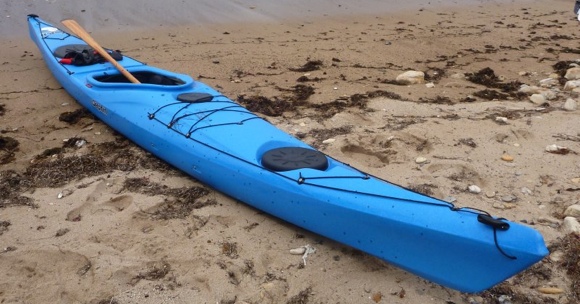 The P&H Delphin I borrowed. A great boat (for people smaller than me!)

By the time we left the bay for the return paddle home, the early morning fog of LA had lifted and the sun had come out. A bit of wind had come up and we now had a quartering sea behind us, which was giving me all sorts of grief in the small Delphin. I’d discovered early that the boat was too small for me, with my big arse in agony for much of the time as it was wedged into the small cockpit. Because there was too much of me for the boat its stability was reduced considerably, so that with the quartering sea I spent more time bracing  than actually paddling forward! Whilst the rest of the So Cal crew pulled away, I fought the damn swell and chop for several kms until finally I reached the safety of the Redondo Marina. 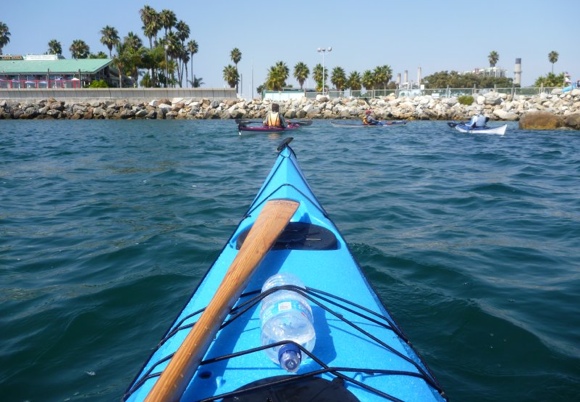 Back to the Redondo Beach marina under the hot LA sun.

Once back on land there was only one thing left to do… find my favourite Californian food, fish tacos! So we packed up and head off to the local Wahoos, where I put away a couple of their finest tacos washed down with an ice cold beer. Then we managed to find a spare spot on the wall to stick up a Fat Paddler sticker, to mark my appearance at their store. 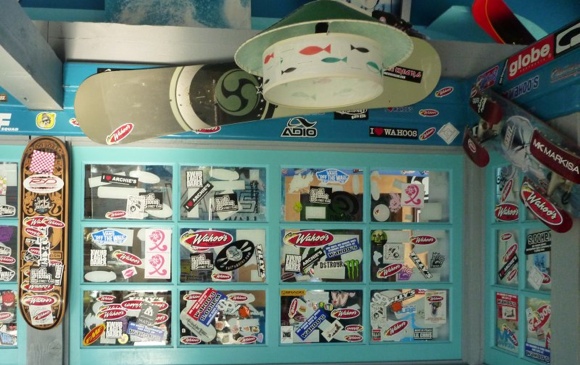 In all I’d had a magnificent day in LA, and all thanks to paddling strangers on the opposite side of the Pacific Ocean extending the hand of friendship to a fellow paddler. To John, Louai, Gennifer and Sharon, thanks so much for making this random Aussie feel so welcome out on your waters. A very special thank you to Blake for organising the whole thing, for the lifts to and from my hotel, and particularly for the side trip to the Korean corner liquor store in El Segundo for Tapatio (I honestly doubted we’d make it out in one piece). Thanks for keeping me alive Blake! Cheers, FP

At Wahoos with Blake (complete with sunshine racing stripe to make him go faster!)

One thought on “Kayaking the Palos Verdes Cliffs of Los Angeles”