Introducing Beginners to Messing About In Boats

Do you remember the feeling when you first felt rapturous joy out on the water? That’s the feeling I want to get across to beginners when they start, a taste of what really addicts us to being outdoors exploring watery worlds. Of course, beginners come in various states of readiness for watery activity, so you need to cater to their needs with the right activities, care and equipment.

On this particular morning we had two folks who had never paddled, plus four other experienced members of TFP. Frank, who joined TFP as landcrew during the last Hawkesbury Canoe Classic, had decided to try his hand at paddling after not having done any exercise for many years. Alessandro, or Mistico as his friends refer to him by, is a surfer who was intrigued by footage of us playing in rocks. The two new paddlers were equally without paddling skills but in terms of fitness, had very different levels for us to consider. 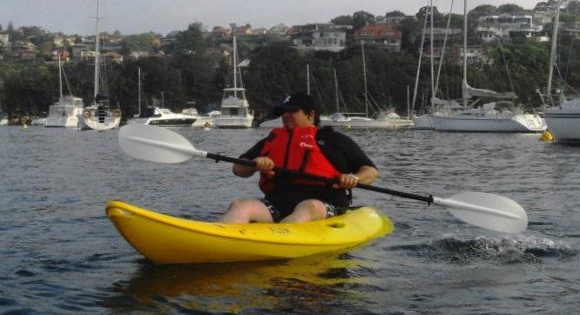 After initially trying Frank out in what to us is a fairly stable sea kayak, and watching him quickly learn how to wet-exit, we decided to shift him to the Sit On Top that Mikey had brought with him in reserve. This was far better and gave Frank the confidence to experiment with paddle strokes without having to worry about swimming again (as much as he claimed he’d enjoyed the swim!).

Not that he was the only one to get wet. Even the experienced ones amongst us get wet from time to time, as our ski-paddling mate Nat was demonstrating as he put a new ski through its paces!

After an hour on the water it was clear Frank was starting to wake up muscles that had long been asleep and we thought it best for him to call it a day. As he walked off to his car I asked him if the swim or the back-ache had put him off. The reply was quick and to the point – “No way! I can’t wait to get back on the water again!”. Brilliant. 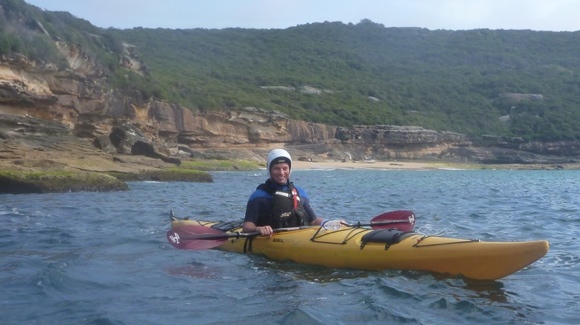 Our next first-timer, Mistico. More experienced in water, although not in a kayak

The next beginner was our mysterious Italian friend, Mistico. As a surfer he was already fit and had a good understanding of the water. After spending an hour with him on flat water, showing him how to brace and paddle more efficiently, we decided to take him out to some rocks knowing that the sea state was virtually flat that day. 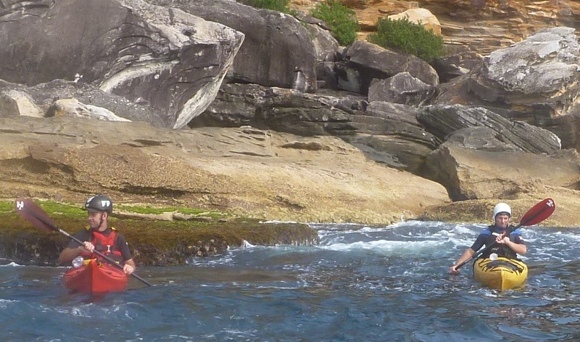 Exploring where ocean meets rock, a most beautiful part of our great city

Mistico gets to play in his first white water, a relatively gentle rebound wave

Playing in the gentle swell gave Mistico a taste of why we love the rocks. We gave him some pointers on how to safely position his boat and then carefully watched him whilst he played along the shoreline. Then we took him over to Gelo Cliffs in the hope that we’d get something bigger to rock-out in, a hope that was to go unfulfilled. The ocean was flat and apart from the odd freak surge, we were able to paddle right up to touch the cliff line and bounce our boat off rocks and patches of sea-weed.

Meanwhile, Michael had decided to leave his usual plastic sea kayak on the car and instead had brought out the little surf Sit On Top to test it. He was whooping and hollering as the manoeuvrable little craft bounced around madly, skidding off rocks and playing with small wash-overs as the surges sucked his boat across the rocky platforms. 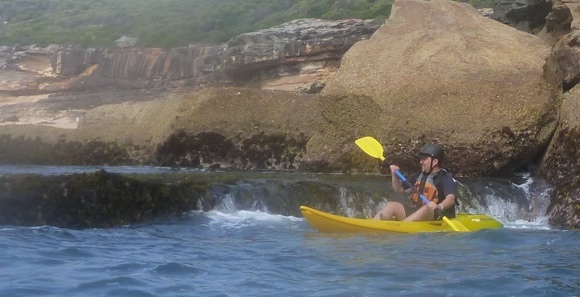 Mikey slots in behind a platform, dropping behind it as an incoming wave sucks the water out 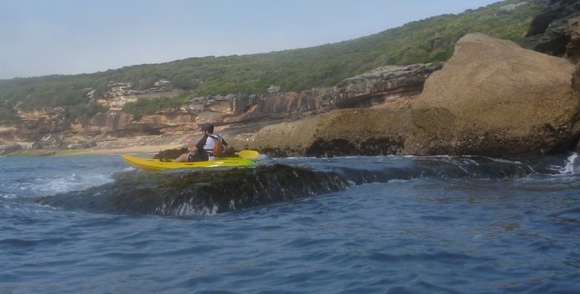 And then he’s off, shooting across the rocks in his little SOT 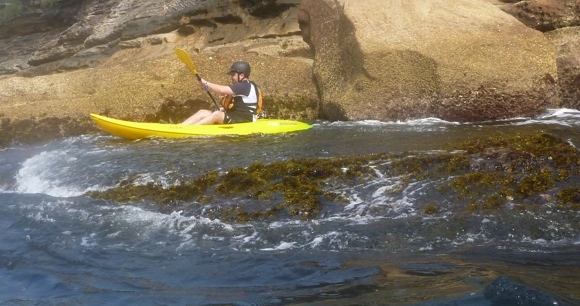 Different angle! Mikey laughing as he shoots across the platform 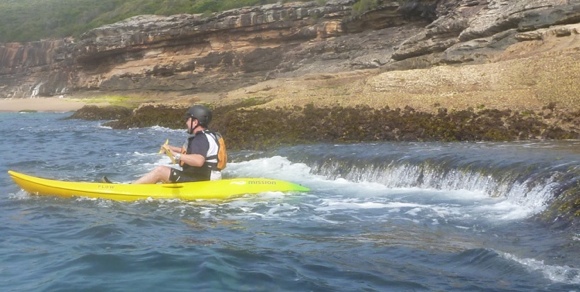 And finally he drops down the front side of the platform…. before heading back for another go!

After a few hours on the cliffs, we slowly paddled back to The Spit. Mistico was grinning from ear to ear, having clearly enjoyed the morning, but looking fairly weary. Mikey too was looking pretty stuffed, as he pushed the slow little SOT along behind us. The hot weather wasn’t helping either, so when we finally got back to The Spit I decided it might be time to try to roll my white water kayak for the first time.

We ended of course with the obligatory Bacon & Egg Roll and coffee, completing the experience for our beginner paddler. The main question is, will we see the beginners back next week to continue messing around in boats? I expect we will. Cheers, FP

9 thoughts on “Introducing Beginners to Messing About In Boats”