End of the Summer Series and Nat Strikes Back 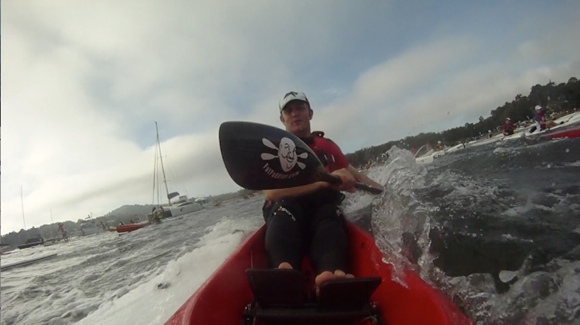 For the second time in a row, getting smashed and sideways during the start chaos.

Well, what a series it’s been. Statistically I have lost every race to a rival. I’m what you’d call an under-achiever. A back-pack paddler. A recreational paddler at best. And yet this season has some some radical shifts for both my own paddling and that of my best mate and fiercest rival, Nat Bradford (Sydneysurfski.com and Team Fat Paddler). 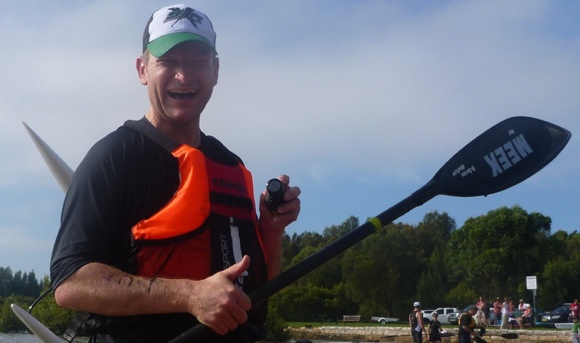 Best mate and fiercest rival Nat, not a little chuffed at having crossed the line before me….

For me I started the series paddling my white water & rock gardening boat at the Balmoral race, which is literally twice as wide and half as long as the Stellar SR surfski I paddle now. By race two at Rose Bay, I switched to my sea kayak, paddling with a timber Aleut paddle, a traditional design used by the Inuit peoples of the Aleutian Islands off Alaska. Then around Christmas I tentatively sat my fat arse into a surfski, and took the first baby steps towards learning to paddle it. 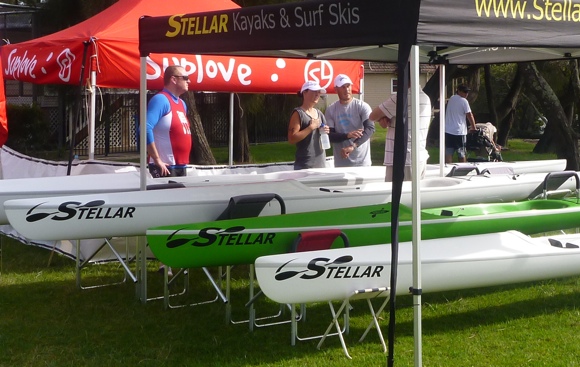 The Stellar range of surfskis at Pittwater. Great quality and performance.

In the following three months I completed two more Summer Series race on the surfski, the Bridge to Beach, the Lifestart Kayak for Kids and learnt to surf down Cronulla way. I also managed to lose well over 20kg through good diet and a hard-core gym routine made up of both cardio and a brutal kettle-bell and core routine. Whenever I could I’d take the ski out into the rough to test myself, learning the art of “remount” and developing a good feel for the boat.

Nat, who had initially struggled in his new Think Evo II, was making huge leaps as well. After I beat him in the rough water of the Lifestart Kayak for Kids, he knuckled down and trained with paddling coach Jim Walker in the famed Jimsquad. Many mornings spent sprinting across the dark murky water of the Cooks River followed and culminated in his blistering personal best in the final Summer Series race at Pittwater, a race where he seriously smashed me by over three minutes. 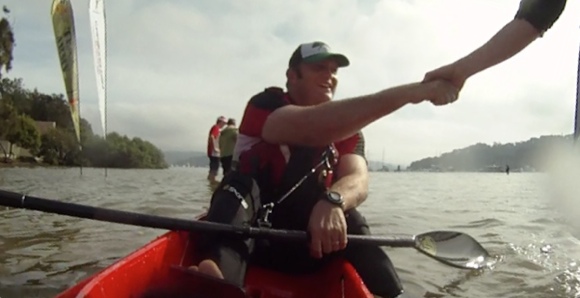 Congratulating Nat after his Pittwater win. Rivals we are, but good mates we are foremost.

Now, with the race series finished, we have the enormous spectre of Mauritius looming. We’ve both developed enough in our skis now to know how hard this is going to be. 28km of terrifying downwind ocean racing. A race some Molokai racers feel is “too scary”.  Nat has developed great technique, I have developed great core strength and stability, and perhaps combined we might have a chance. But on our own?

We have 9 weeks to go. No more friendly sprint races, just a need to put in distance on the ocean. The real job is drawing closer and I’m not sure either of us are ready. Wish us luck as the countdown begins. Cheers, FP

P.s. A huge thanks to Dez Blanchfield from Blast Paddlers for putting on the Summer Series, Alex Francois for his amazing photography, Gavin Clark from Slipstream Surf for his amazing support of my surfski evolution, Gordon and Ian from Stellar Kayaks & Surfskis for their boat support, Malcolm Hall from Carbonology Australia for his help choosing my CS3 wing paddle and for his invaluable rough-water paddling advice, and an extra special thanks to all the new friends I made from the Summer Series, be they paddling skis, kayaks, SUPS and OCs!