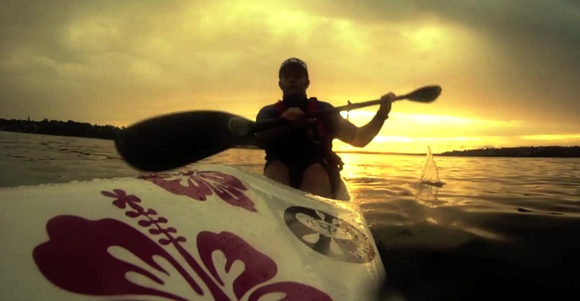 It’s now only five weeks until Nat and I board a plane for Mauritius. The past five months have been intense, as I’ve attempted what last December seemed impossible – lose weight, get fit, and learn to paddle a surfski well enough to survive the 28km ocean race that is the Mauritius Shamaal.

It hasn’t been an easy road. In the first four months I lost 25 kgs, through a combination of diet and exercise. That’s some serious weight, and for those that were close to me, they know how hard I had to work to get it off. This included hours each week in the gym, foresaking all food of any remote flavour and all alcohol, and a seriously tough core-strengthening regime that involved many painful sessions with kettle bells.

It also meant time in a surfski, with the Stellar SR my ride of choice. I’ve fallen off her maybe a hundred times. I’ve paddled her across rivers, lakes, bays and on the ocean. I’ve learned to catch runners and surf breakers, and even learned how to keep upright when side-surfing (well, sometimes!).

I have no idea if I’m close to being prepared enough for Mauritius. I’ve had no-where near enough time on the ocean, and long hours in a new job are preventing me from training as much as I’d like. Still, in 5 weeks time I’ll be going, so I guess time will tell.

5 thoughts on “The Hard Road to the Mauritius Ocean Classic”