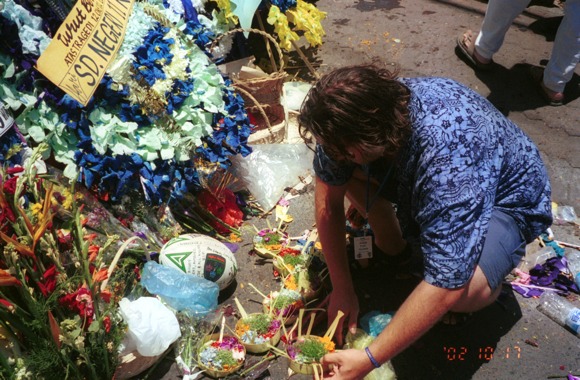 An offering and a shrine to rugby friends lost, Kuta Bali, October 2002

I found myself sitting at work, exactly ten years to the day since I was in Bali that fateful day, with my mind wandering to the bad times. I’ve never felt right claiming to be a victim of Bali – I wasn’t injured, I didn’t lose family, in fact I didn’t lose anyone close to me that fateful night – so I’ve always felt guilty for my pain and sense of loss. But the impact of the terrorist bombing that hot October night was far worse than I let on to those around me. In the six months that followed, I slowly unraveled, losing my girlfriend, my job, my sense of self-belief. I felt guilty for being one of the lucky ones, fearful that another bombing would take me, and a growing sense of disconnect with the world around me. I was listless, empty, and depressed. 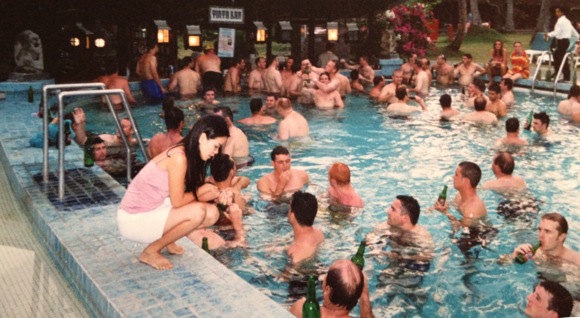 Depression can affect anyone with the right conditions, and you wouldn’t wish it on your worst enemy. I believe most will experience it at some time in their life when fate twists for the worst – trauma, lost loved ones, financial problems, relationship breakdowns, post-natal depression and the list goes on. It is an illness that kills people and needs to be acknowledged and accepted as just another ailment that needs treatment.

In the days after the bombing, signs of hope appeared in shattered stores all over Kuta.

In my book The Fat Paddler I wrote a chapter on the events of Bali and my involvement there. It was the single hardest part of the book for me to write and in many ways I managed to steer away from the real depth of depression I experienced, whilst still managing to open up personal wounds that I thought long healed. I realised that I was far from recovered, that the images of horror that had fuelled my anxiety and fears were still crystal clear in my memory.

Several months after I finished the book I decided to sit down and write about the real low point of my depression, the day that I nearly lost the daily battle with depression. In one sitting I poured out the words in what was to become my darkest piece of writing. When I finished it, I was ashamed of what I’d expressed, and the words have remained largely hidden away, unpublished, until today. 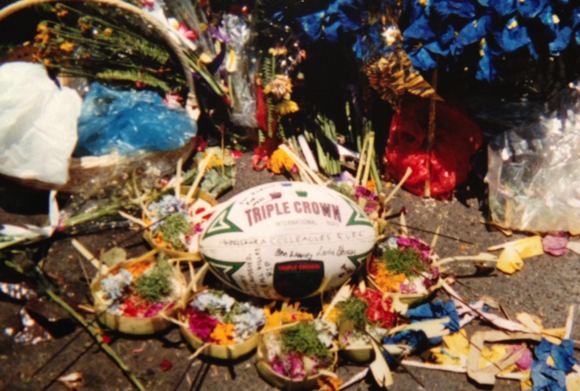 Our final offering to the Gods of Bali. Please look after the lost souls of the Bali bombing.

Since that dark period my life has turned around. I have recovered from the depression, met a wonderful woman, created a wonderful family, have a great career and have rebuilt my life into something rich and fulfilling. I have recovered and undoubtedly grown as a person as a result of my past experiences.  The 12th of October will always be a day of mourning for me however, and these words I wrote this morning sum up well my feelings on Bali.

Destruction is usually followed by reconstruction and rebirth, and in many ways Bali represents that for me today. But that does little for those who lost their lives, nor their families and loved ones who lost an entire future. I am thankful for the rebirth, but still grieve for the dreams lost in the flames. RIP.

There are many people still suffering depression today. Their feelings may be hidden and it is important to watch them and look for the signs of self-harm, as depression still remains a killer. I publish the following in the hope that someone may read it and understand that what they are feeling happens to others, that they aren’t alone, that the feelings of hopelessness can be overcome.

To the lost ones of Bali of all nationalities, my thoughts are with you as always. FP 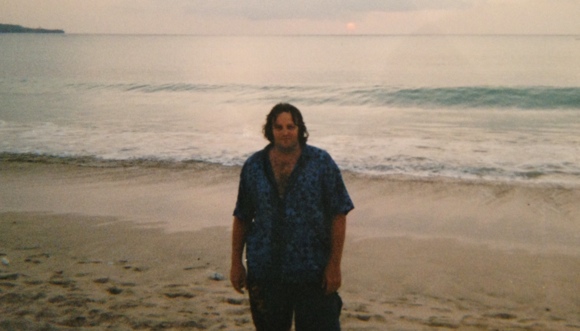 Looking around the small beachside studio that we called home, you’d think Belle and I were living in the early seventies. Chic leather furniture, space-helmet televisions and flying-saucer record players adorned the space. Against one wall, a pair of Technics 1200 turntables bookended with enormous speakers created a DJ alcove which had lit up many a party. Smoked glass drinkware and brown patterned curtains completed the look of our time warp apartment, a stylish shrine to the decade of my birth.

To my weary eyes it looked empty and meaningless. Two months earlier my life had been thrown into chaos when, on a rugby tour to Bali in October 2002, I’d been caught up in the Bali Bombing. Though not personally injured, the mental trauma of the event had wrought terrible consequences, with each day punctuated by depression and anxiety, fed by a nightly routine of insomnia. I was struggling on every level – struggling with my work, struggling with my personal relationships, struggling with life itself. Logical thought patterns were being replaced with illogical fears fuelled by terrible flashbacks of carnage, death and pain.

My girlfriend Belle was struggling too. Several years my younger, she was more interested in tasting life’s pleasures than dealing with the broken spirit of her damaged partner, and her attentions were already drifting elsewhere. Living in the Boho-glam streets of South Bondi, she was being presented with an endless supply of beautiful and charismatic men and women as alternatives to the misery of our withering relationship.

We continued the charade as we prepared to hit the beach; we’d only recently moved to Bondi in an attempt to help the healing process. I’d spent much of my life in or on the water and felt beachside living would be the best medicine for my depression, and in many ways it would prove to be so. Despite an overwhelming urge to do absolutely nothing, Belle urged me to get moving and face the day, with breakfast at the local cafe as our first stop.

Breakfast went as expected. Belle laughed gaily as she flirted with the local gaggle of models and photographers, whilst I stared blankly out at the street, my eyes searching for vans filled with explosives. I had become obsessed with vans, the mere sight of which triggered fits of anxiety and panic, as images of burnt dismembered bodies flashed into my mind. The paradox was obvious to all, Belle was young, beautiful, vivacious and available, whilst I was old, fat, sullen and utterly broken. To the local socialites, Belle was ripe for the conquest.

After breakfast we moved down to the beach, accompanied by a local producer and his sex-kitten European model girlfriend. As the girls danced together on the beach, we were issued an invitation to party at their place. Quietly I muttered my refusal, but Belle was insistent. Would I mind if she went with them? No, that was fine, whatever. I suspected she was off to indulge in another of her affairs, but I’d stopped caring about either of us and was numb to the thought of her infidelities. There were far worse problems in the world, as Bali had proven to me that day.

I sat down on the coarse sand, staring out to the blue sea before me. My thoughts quickly drifted to the dead and injured of that fateful night, people just like myself. One minute sharing a beer and a laugh with friends, the next minute their lives obliterated in a flash of thermobaric destruction. Compared to the burnt and disfigured, those that died instantly were the lucky ones. Many more still writhed in pain in Burns Wards across Australia and Asia, their lives now one of painful survival and a future marred by disfigurement.

So many questions filled my mind. How could any human being inflict such a terrible act on others? How was it that I missed the carnage and survived? How could the civilians of any country hate Australians so much as to warrant such a horrific crime? The last question niggled at me the most, and I’d spent some time in the past few weeks studying the history of Indonesian and Australian interaction. It didn’t exactly paint a positive picture and I now felt a further sense of shame for some of the past actions of my own government.

The swirling thoughts mixed and formed a dark storm cloud of depression. Looking over at some cashed up eastern suburbs visitors to the beach had me snarling in disgust, their excessive spending habits on fashion and high living were a stark contrast to the inhabitants of Bali, who by now had seen their economy collapse and were fighting to put meals in front of their children. The paradox of waste vs survival seemed to crop up all around me, feeding my bitterness, shame and disgust with myself.

But the sea in front of me remained pure. Blue breakers rolled in gently to the beach, forming little tubes as the waves collapsed upon themselves. Frothy aerated water bounced around in the shallows as the waves broke and receded, the constant pulse of the ocean keeping a steady beat on the shore. The water was inviting me in, to savour it’s refreshment, to feel it’s cooling caress, so I got up and plunged into her.

Swimming down to the sand, I spun my body around to look up at the rays of sunshine filtering down into her depths. I have been in love with the sea since a little boy, and being one with her seemed so right during these dark days. In fact, I didn’t want to leave, knowing that I could easily let her take me, to absorb me back into her biosphere, to become one with her totally. It would take away the pain, the panic, the flashbacks and nightmares. It would be redemption from the shame.

Smiling, I opened up my mouth and breathed the salty water into my lungs. I expected it to hurt, but surrendering myself to it completely, it did not. Still gazing up at the filtered sunshine, my pain seemed to dissolve, replaced with a feeling of contentment as my world started to slip from my conscious grasp. As I allowed myself to succumb, a small smile spread across my face as I welcomed the inevitable……

“Oi mate! Can you pass the ball back?”

The shout from a local beach reveller shattered my suicidal dream. I wasn’t passing on, I was still sitting on the coarse sand, my mind still shattered and my questions unanswered. The pain of the world was still there, I still had no answers, and I had no idea what to do next. Walking into the sea to my death seemed so beautiful, and yet I had neither the strength nor the commitment to do so. I was still just me, a broken, shamed victim with no idea where to turn. Then in a final moment of absurdity, I wondered what my girlfriend was up to.