I didn’t realise how important the ocean had become to my mental well-being until a week ago when my wife insisted I take my surfski out for a surf. I’d spent the previous two months concentrating on long distance canoe paddling and over time had become dark and broody (the fact I have a not too pleasant 111km marathon coming up in a few weeks might have something to do with that!). My wife insisted… “Go and have some fun and cheer up!”.

At the same time I’d just sold one of my Stellar SR surfskis to new paddler Tom who was also keen to learn to surf. With a smallish surf report of around 1m swell and no wind I thought it would be a perfect day for a surf lesson, so we locked in a time to meet at Shelly Beach in Manly, a stone’s throw from my favourite point break at The Bower.

A nice little 1-2 footer at Manly’s Bower, perfect for learning to surf

We started the session with a little wave theory whilst still on the beach. I explained wave dynamics, the physics at the point of take-off and other points that I’ve found useful when learning to surf. Then we paddled out into the early morning sunshine and in just a few minutes I grabbed my first little wave, a clean 1 footer that instantly put a smile on my face.

That amazing feeling when your stern lifts, the nose of your surfski drops and gravity takes over…

Tom meanwhile made a run at his first wave, accelerating as it loomed but then slowed down as the wave started to pick him up and subsequently fell off the back of it. I had a word about accelerating hard until properly on the wave and then, as the next wave came through he was on… and surfing his first wave! 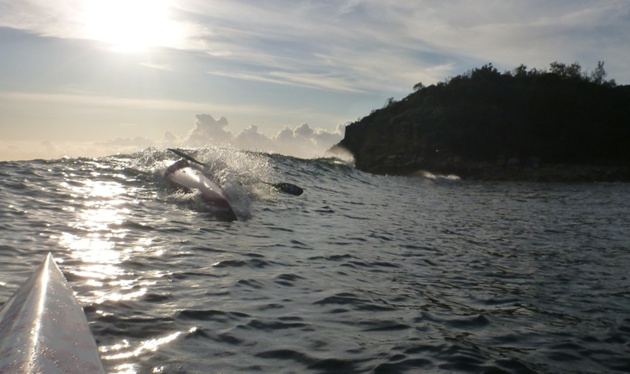 Learning to surf wouldn’t be complete without a few thrills and spills!

Of course no first surf is complete without a spill and Tom was in the drink as soon as the froth of the breaking wave caught up with him. But he quickly remounted and joined me out the back ready for his next wave, with a small smile starting to spread across his face. 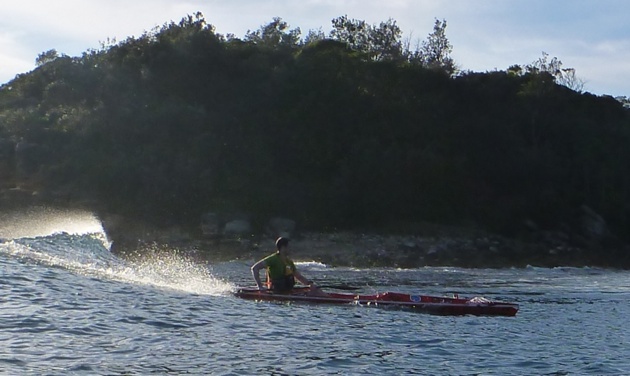 And when it all comes together… yeeeeew!!

For the next few waves I watched and offered tips on his technique. I explained bracing technique and which side to brace on when going sideways along the wave and, as each wave came and went Tom got better and better. By the time he’d caught several waves he was bracing into the wave well and starting to play with changes of direction and wave position. And that smile was growing bigger and bigger as the surf session progressed.

Of course I too was catching wave after wave and despite the small size, managed to grab the occasional bigger set that came through and made the surf more interesting. My smile grew too as I reconnected with the ocean, enjoyed the feeling of surfing the pit with a wall of green above my head, and generally embraced the salt and the sun. My wife was right, I had needed the ocean hit-out and decided then & there that I’d never spend so long away from it.

Tom of course had had a great day and was so enthused he put together this little video of his experience. I suspect that he too had just fallen in love with the surf, and the amazing surfability of the Stellar SR…. loves I can very much relate to. Cheers, FP

One thought on “Another Surfski Rookie Discovers the Joy of Surf”