Back in 2012 at the Mauritius Ocean Classic I had the pleasure of meeting Barry Lewin, a Durban-based surfski paddler with a huge hunger to grow the sport. He impressed me with not only his natural paddling ability but his business acumen and drive for success.

In the past week Barry has also achieved a long time goal – he’s taken out the single ski title in the South African surf lifesaving Nationals. In a first for South Africa, it puts him in the record books as part of the only father/son combo to have taken out that particular title, with his father Mark having won it back in 1987. 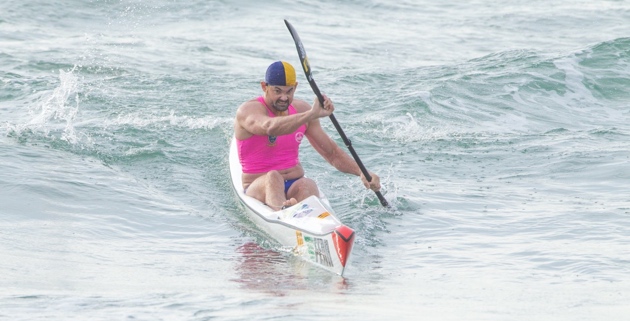 I managed to grab Barry for an interview on his recent win and to gather his thoughts on the current state of surfski.

FP: Hi Barry, thanks for giving me this interview. You’ve just taken out the South African Surf Lifesaving single ski National title, what is the significance to you of this particular result?

Baz: Hi Sean. Great to be chatting, haven’t seen you since the Mauritius Ocean Classic, hope the paddling is going well.

As you know I’m predominantly a surfski paddler and organise a lot of surfski events now days, but it all started as a little kid going lifesaving as a nipper down at Marine Surf Lifesaving Club on the Durban beach front. Even though it is not my core sport, it is where my sporting base was built and I have a lot of passion for the short exciting racing. Over the last 15 years I have pulled the spec ski out and raced nationals and loved every minute of my lifesaving, but one title has avoided me. I have been on the podium 9 times but never on the top step, so it’s always been something I have wanted to tick off my list.

There were a lot of firsts during the SA Champs week that were quite special to me as well – I captained my region to an interprovincial win, captained my club Marine SLC to their first SA Senior champs win, and became part of the first father/son to win the National ski title after my father won in 1987 on the same beach. It was certainly a week to remember.

FP: We’ve seen considerable dominance by South Africans in ocean surfski racing in recent years, how do think you boys would compare against the Aussie clubbies around the cans?

Baz: Aussie lifesaving is massive and hard to compare to the small sport that it is here. I think the top 10 guys in SA would be able to compete with the Aussies as they are all world class ski paddlers in other disciplines as well, but we dont have the depth that lifesaving in Aussie has. I was chatting to the Notten brothers who have done well at Aussies in the juniors the last 2 years and they were explaining how many rounds they had to get through just to make a final, it is unreal.

FP: On the topic of ocean surfski racing, we’re a bit sick Down Under of watching you Africans win so many of the World Surfski Series fixtures. Are there any Aussies in particular you boys need to watch out for, any emerging talent we can pin our hopes to?

Baz: The Aussies have some of the best paddlers in the world and if they focused more on the long distance surfski scene, would be really hard to beat. There seem to be too many distractions, like going to the Olympics and winning gold medals, where we South Africans just want to have fun and go downwind making us a little more ready for the World Series events.

Just to name a couple though, Murray Stewart can win any race from 200m to 30km if he puts his mind to it and then there is the old guard of Clint Robinson who has the experience to make him practically impossible to beat. There is also a new group of younger paddlers from Aussie taking the surfski scene more seriously like Michael Booth and Corry Hill. These younger guys show where the sport is heading and they are going to be the ones to beat in years to come. 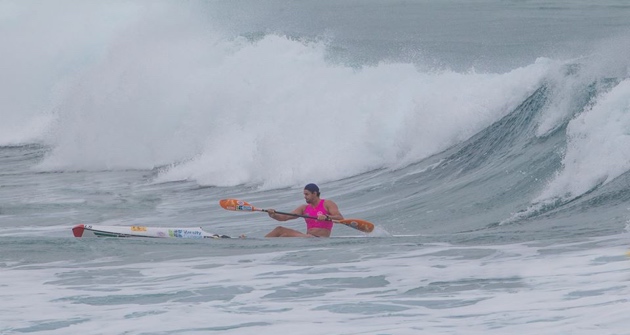 Barry enjoying a small runner in the spec ski

FP: You’ve been consistently in the top ten for the World Series races you’ve competed in, should we expect to see you on the podium more often?

Baz: I have work commitments running races in Durban for the first half of the year which makes it hard to train and travel. I would love to spend more time on the water and indeed will do so later this year, so watch this space. It would not be a challenge on the World Series but I’ll pick one or two events a year to focus on, the first being the Mauritius Ocean Classic.

FP: I’m sure you’ve seen some pretty spectacular coastlines via your paddling and surfing, what bodies of water would you rate amongst your favourites?

Baz: The amazing thing about the ocean is that no two days are ever the same and I love exploring new spots. My home town of Durban is by far my favourite because of the warm water and year round great conditions. We get great downwind in the summer and then the surf cooks in the winter (ps, its not really winter with 20 to 25 deg water).

I have been very lucky to travel to some awesome places for paddling, some of my other favourites including:

FP: Some of the best surfski footage to emerge over the years has come from the Marine Surfski Series twilight races. Can you tell us a little bit more about this series and your involvement in it?

Baz: The Marine Surfski Series has been around since the early 90s and is a Friday night race series in the summer in Durban. Most of the Durban paddlers cut their teeth in the sport at the weekly hit outs and I believe it is why the standard in Durban is so high, with paddlers getting to race each other every week to hone their skills and speed. The beauty is that the events are very achievable for novices so it has something for everyone and drawns in some great crowds. I took over the series 6 years ago and want to add my own flavour to it. We’ve been lucky to find some sponsors to back the series with Varsity College, FNB and GoPro South Africa helping to make sure the series has some very good coverage. We love making the videos and hope to put out even more cool videos in years to come.

FP: You’ve always struck me as a paddler with considerable success getting and keeping sponsors. Who supports you these days and what’s the secret to keeping your sponsors happy?

Baz: I studied marketing and have used my experience in the media to really put together a program that gives a good return to my sponsors. My website www.barrylewin.co.za is a big part of that. It takes a lot of work but I really enjoy being involved with very cool brands and people.

My two bigger sponsors have been with me for a long time, Varsity College for 12 years and Jeep Team South Africa for 11 years. Their support has been amazing in allowing me to follow my paddling dreams.

FP: Looking back at the 2012 Mauritius Ocean Classic where we first met, what were your first impressions of Team Fat Paddler?

Baz: The Fat Paddler crew simply love what they do. Their passion rubs off on those around them and one can’t help but smile in their company. With a great attitude also comes a huge thirst. I am sure the Tamassa Resort lost a lot of money keeping the crew filled to the brim at the bar, the island still hasn’t recovered from running out of alcohol that year.

FP: During that year’s race I got smashed in the Le Morne pass, got tangled in my ski and was dragged about 500m across the reef. Nat also got pummelled into the reef. Has that ever happened to you??

Baz: Its happened all right but you make it sound like it was the end of the world. Thats just part of the game. The top guys cut the corner of the reef and surf the wave across the Le Morne pass. I’ve got it right most of the time but every now and again when you get it wrong its a bumpy ride. I’ts just as fun and keeps us on our toes!

FP: Team Fat Paddler did teach you South Africans a thing or two about “boat races” in the bar that year. Admittedly you had to make do with Rob Mousley (surfski.info) and race director Anton Erasmus representing your country. How do you deal with the shame of such a loss? 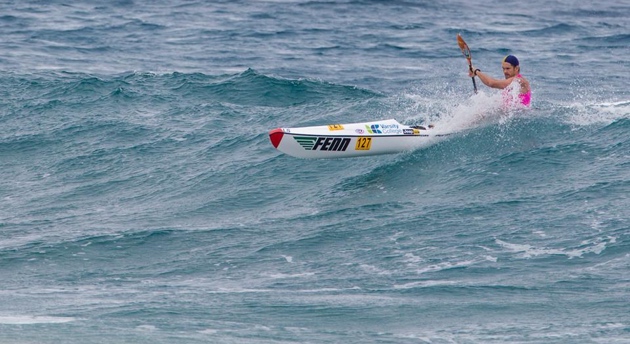 Pushing his Fenn spec ski in the South African lumps

Baz: How did they make the South African boat race team?? I claim a rematch! I think we may have an annual challenge with a Trophy on the cards for Mauritius in the future to settle this one.

FP: Lastly, what’s the next major goal for Barry Lewin?

Baz: The person that dies with the most toys wins! Winter is on its way here in Durban so the jetski and surf boards are ready to go. On the racing front I would dig to be competitive in the international races I’ll be going to later this year, and on the business front, to make surfski into the coolest sport in the country!

FP: Well all the very best with that! Thanks again for giving me the time today, and best of luck for your future goals (unless they involve beating Aussies of course!).

I couldn’t find footage of Barry’s win but I thought this cracking video of Barry and his dad Mark surfing cyclonic swell off Durban was quite fitting. It’s an oldie but definitely worth a watch! Cheers, FP