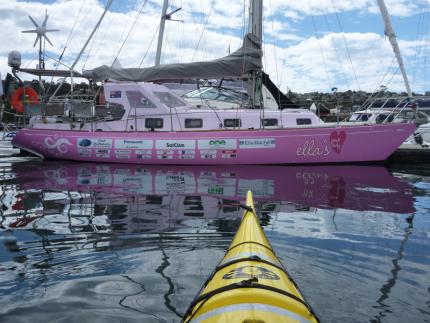 One of the reasons I love paddling Sydney Harbour so much is there is always something cool to see. On this particular paddle, it was the bright pink yacht “Ella’s Pink Lady“.

If you haven’t heard about this yacht, then let me fill you in. It’s skipper is about to attempt a world-record solo non-stop unassisted sailing journey around the world. And it will be a record because the skipper, Jessica Watson, will be at 16 years old the youngest person to have ever done it. 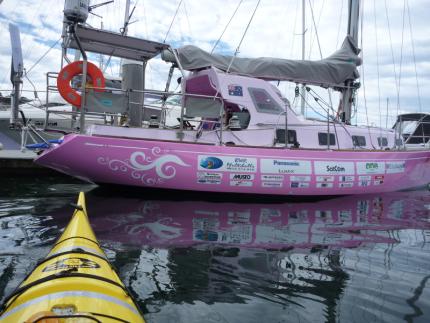 This attempt is of course not without controversy. Seasoned sailors have claimed she has a 1 in 3 chance of losing the yacht in rough seas, and a further 1 in 3 chance of losing her life. Many have argued that it is irresponsible to let a 16 year old attempt something of such a risky nature. Furthermore the fact she recently crashed her yacht into the side of a tanker after falling asleep at the helm has fuelled the fire of detractors.

Regardless of the controversy, it was great to see her in her yacht on Middle Harbour and I most certainly wish her all the very best of luck on her adventure. Go get ’em girl!  🙂

Ciao Cayenne, thanks for the memories