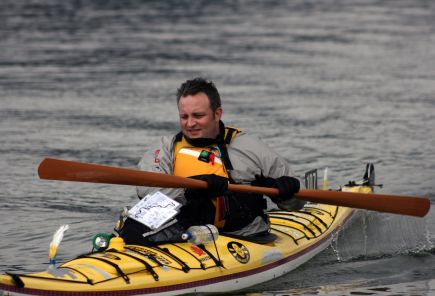 When you kayak a long distance on your own, you inevitably have meandering thoughts about many things ranging from current muscular pain to family to why your bow wake is glowing like fluoro ribbons in the dark. On my recent paddle as the night grew late and I found myself paddling in the dark alone and in considerable pain, my thoughts grew crazier and a little scattery as the night progressed. Of course these were fed by some of the amazing things I saw during the night, such as the aforementioned luminescent algae creating glowing lines in my bow wake, or exploding in fluoro clouds as my paddle bit into the water. Or the sight of a paddler catching a ferry cable around the neck in the dark due to paddling too close to the shore. Or the vision of billions of stars stretched out like a milky ribbon across the sky in a display seldom seen in the light-sodden skies above Sydney. 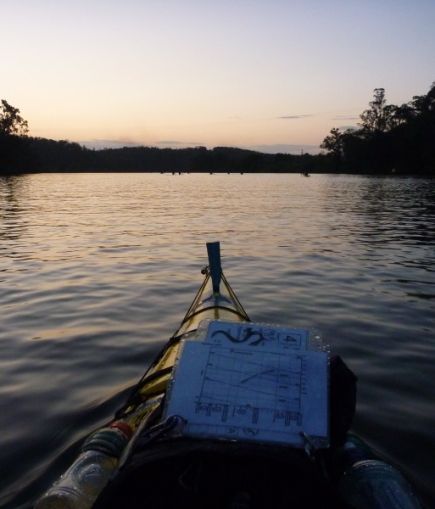 The final light of Saturday - only 90kms to go! Bummer...

So what did I think about during the more painful hours of my paddle? I thought alot about my family: my wife Bec and my two daughters Grace and Ella. I thought about my last car accident, and the pain I went through learning to walk again with a shattered pelvis. I thought about sharks occassionally, and the unlikelihood of there being any this far up the river. I thought alot about my support crew, actually worried about them and their safety driving through the night (had I known how much fun they were having I may not have had these particular thoughts!).

I thought about my paddle mate Ned, who had pulled out at the 30km mark with a raging nauseating migraine, and hoped he was feeling better. I thought about cutting my pants off with scissors to try to alleviate some of the pressure sores that were developing (it wouldn’t have helped). I thought about my Greenland Paddle and how lucky I was to have a paddle that could do different strokes, resting muscle groups when they badly needed it. I thought my future kayak adventures, and what I should aim to do next. 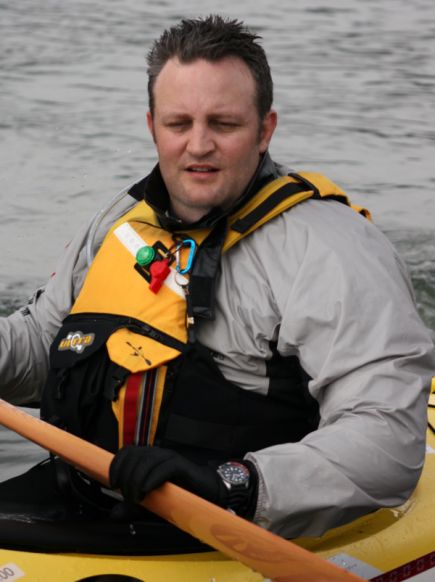 There were many dark thoughts too. I thought on a couple of occassions about pulling over to the side of the river and sleeping for the rest of the night until a rescue boat found me. I thought about simply pulling in at the next checkpoint and refusing to paddle anymore. I thought about taking all my remaining pain killers at once (I had taken a couple and had half a dozen left) to cut down on the pain. And on the odd occassion, I seriously thought about stopping and crying. 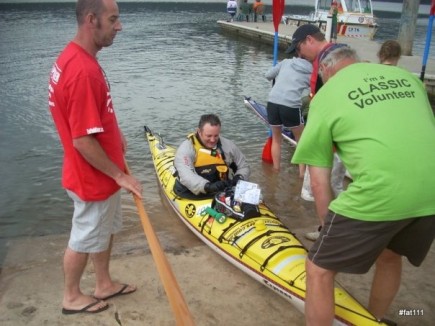 When I look back at the event now, I realise it is this level of hardship that really allows you to test your mental resolve. I honestly felt mentally weak on quite a few occassions out there in the dark, and yet somehow I managed to keep putting the paddle in the water enough to get me to the end (unlike many who pulled out). Whilst I’m in no real hurry to do something like this again any time soon, I can see why people become addicted to this type of pursuit. So if you are about to embark on a big and gruelling adventure, I’d like to send you my heartfelt wishes for your success.