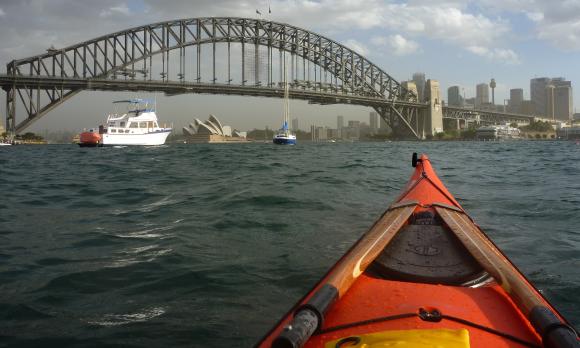 Over the past few weeks I’d been lamenting the fact that I wasn’t getting the same sense of adventure out of my paddling. Whilst initially I couldn’t quite put my finger on it, I realised that it was because I rarely went paddling alone anymore. The price of popularity it would seem – haha!

So on a hot and hazy Sydney Spring day, I put the boat in at Greenwich, a few kms west of the Sydney Harbour Bridge. Immediately I noticed that the water was being cut to pieces by big boat-chop, with large bow-wakes criss-crossing the Harbour from every direction. I could tell straight away that this was going to tough, as my new boat twitched madly in the battering waves. 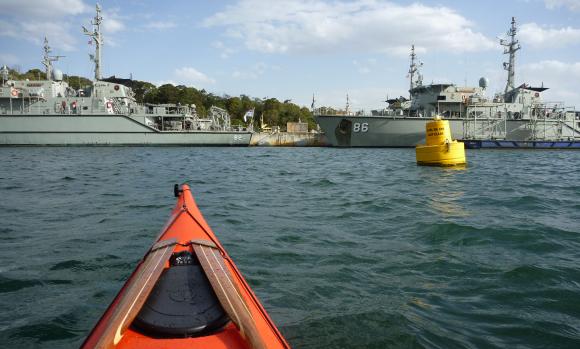 My first “rest stop” was to have a look at the navy boats in Wollstonecraft Bay. Admittedly I felt a little nervous snapping off a few pictures in case the Navy Divers popped out of the water around me and dragged me off to a military prison for espionage. Ok, a little dramatic perhaps, but regardless I didn’t want to hang around with a camera in hand, so I plunged back into the main part of the Harbour and the constant fight against the multi-directional waves.

My next “rest stop” was by a wreck off Blues Point, which was copping a hammering from the waves. For some reason I thought it would be great to get close for a few pictures of the incoming surges, and whilst the pictures weren’t bad, the battering the kayak copped against the wreck was less than ideal! 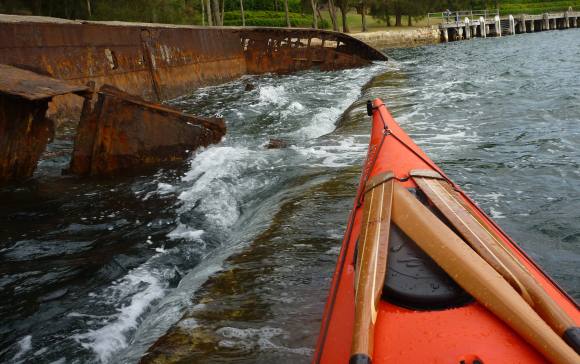 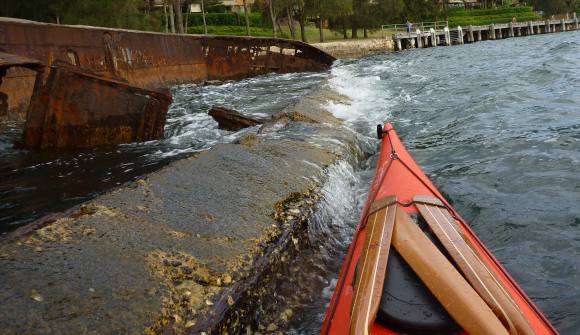 Heading off again I rounded Blues Point into full view of the city and her Harbour Bridge. I may have even enjoyed the view had the wave-action not stepped up a notch from the increased ferry activity, which was now smashing my kayak from every direction and making it increasingly hard to stay upright. 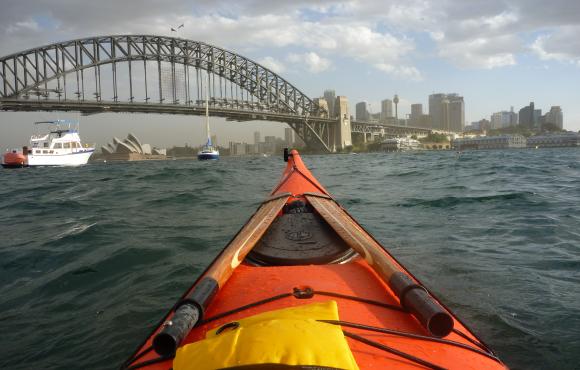 Damn chop - this was a "lull" between the bigger waves

I was starting to get a bit nervous at the incredbily rough water and decided to head back to Greenwich. Paddling back around Blues Point and on past Balls Head everything seem to be going fine. However, from behind me and about 30 yards to port, one of the bigger JetCat ferries came flying past, throwing up sets of 5 foot breaking walls of water, which with a slight turn into them I just managed to kayak over. However, a large pleasure cruiser was also trailing the ferry at an angle and its equally big wake hit me cleanly on the broadside. Then I had the torturous few seconds of teetering on edge, slapping the paddle down hoping to brace myself but knowing it’s all too late and I’m about to go over. So over I went.

Being upside down in a kayak can make any paddler a bit anxious. I would say I was a bit more than that as I scrabbled at the loop on my skirt before managing a non-too-graceful wet exit. And then there I was, floating on the Harbour on the edge of the major shipping lane with an upside-down kayak and beautiful Greenland Paddle floating away somewhere.

I have to say I’m glad I’ve done some rescue training, because it does make you remember to do a few things. Firstly, don’t let go of your boat. Secondly, get your bloody paddle before it floats away. And then thirdly, think about your rescue option. My first thought was to swim to shore (about 30 metres away, and a rocky ledge). A few minutes of swimming with the kayak full of water and I was sure that this was no longer an option.

Next I thought I’d try a paddle-float self-recue, a manouver I’ve seen demonstrated but have never attempted. Especially with a Greenland Paddle! But calmly I slipped the float over my paddle, inflated it and slid it under the bow-line and elastics behind the cockpit. And then amazingly, I performed a perfect re-entry using the paddle-float in the middle of the choppy waves of the shipping lane – brilliant!  However, there was a slight problem – the back rest was now tangled beneath me and I couldn’t get properly into the cockpit.

At this stage two young fellas and a lady-friend drove over in a small fishing tinnie and asked if I needed some help. Why not! So I tried to climb into the fishing boat but found I was too tangled in the cockpit. After some discussion, we parted ways so I could roll back under, perform another wet exit, and then do an assisted rescue to get back into the kayak. Except again, I was tangled in the seat!

So a third time I rolled over in the kayak, slid out, and then one of the fellas in the boat undid the back-rest so I could get in properly after another assisted re-entry. But instead of driving off, my rescuers offered to tow me back to my launch point, which I pointed out to them. Except when I got there, I discovered that in my confused state I’d given them the wrong directions and they’d driven me across to the wrong side of the Harbour!

We then pulled up to a private pontoon, and using a bit of ingenuity, plus a little raw strength, I managed to drag myself up over the barnacles and oysters and onto the potoon. From there I managed to empty out the water in the kayak, get back in and get settled, and wave the fishermen goodbye. Then it was off across the shipping lane again, whilst the setting sun cast a luminous glow over the water. 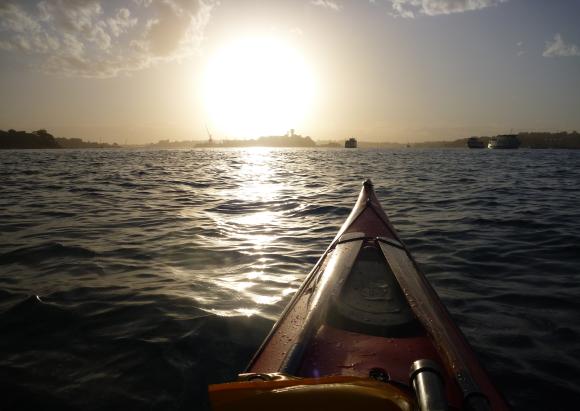 Heading back to my launch point as the sun sets. Note how wet the kayak is!

Once I finally arrived at the Greenwich boat ramp, I was able to take a little breather and take stock of what had happened. The boat had a few minor scratches from our bingle with the wreck earlier, but worse off was my leg, by now streaming blood from barnacle & oyster cuts sustained earlier. 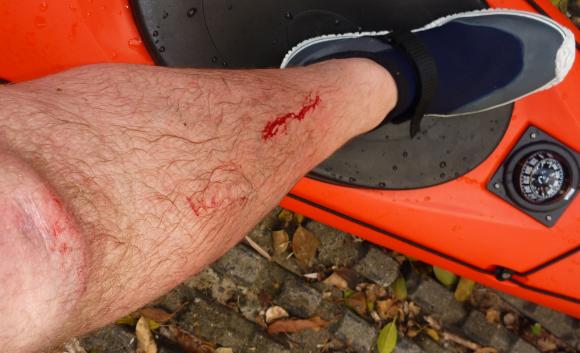 Now a little blood has never stopped me before so I quickly tied off the boat on the car before taking a final few photos of the setting sun, which through the dusty haze looked incredibly like a nuclear explosion on the horizon! 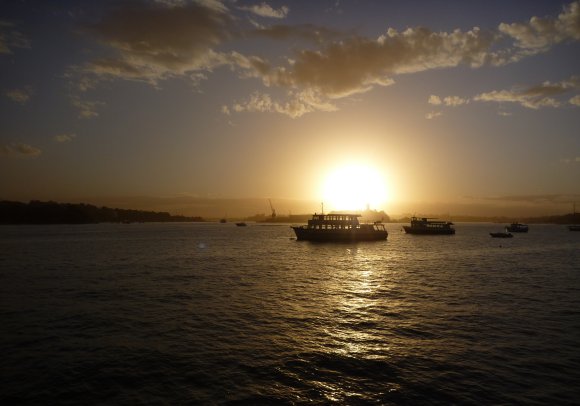 Sunset over Sydney Harbour..... or the start of nuclear war??

Of course after such an exhilarating afternoon, I’d worked up a pretty decent thirst, and stopped off at a bottle-shop to get my wife and I some wine. And that’s where I found this aptly named beer to top off my adventures for the day. Cheers! – FP 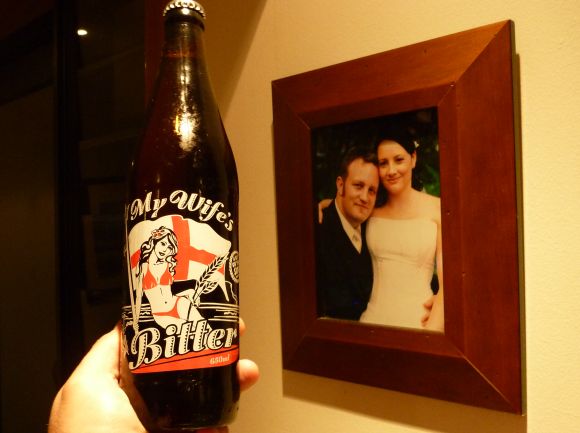