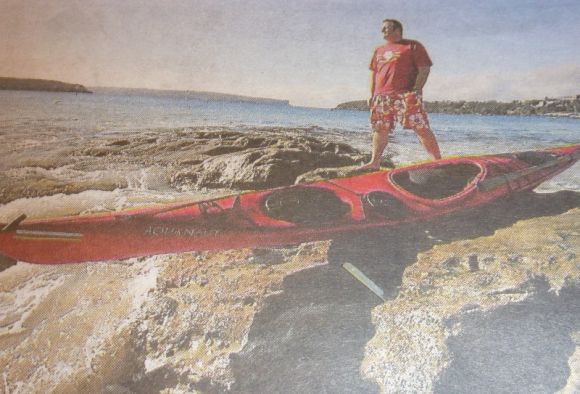 When I was asked to speak about kayaking at the Sydney International Boat Show,  I wasn’t quite expecting the media attention that came with it.  A conversation with a journalist does not necessarily translate into newspaper inches, so I wasn’t expecting much of a mention in the Sydney Morning Herald’s Boatshow edition,  particularly in light of other speakers including “Crossing the Ditch” paddlers Justin & Jonesy and world sailor Jessica Watson.  So it was quite a surprise when I started getting messages from friends about a feature piece in the saturday paper.  Of course, the story is only available in the print edition,  so here it is transcribed below (scanned version here). Cheers – FP

LARGE AND IN CHARGE
Sean Smith’s Fat Paddler blog is an inspiration to readers around the world.

Once a reasonably fit young man who regularly played rugby,  the Sydney man’s world was thrown in turmoil in 2005 when he was involved in a horrific and near-fatal car crash.

The dreadful accident impaled his body and left him not only with severe internal injuries but a cracked skull and a shattered pelvis.

While he survived the wreck,  his fitness took a severe battering and in the aftermath he began a decline into poor health.

“In the three or four years afterwards,  I couldn’t run and I got pretty fat,”  says Smith.

“I was probably drinking too much and smoking too much and early last year I got the first warning signs like chest pains and I realised I really needed to do something before it was too late.”

Luckily,  salvation came in the form of a kayak and a paddle.

In March 2009,  a friend told Smith he was entering the Hawkesbury Canoe Classic,  a 111-kilometre night kayak paddle along Sydney’s historic river to raise funds for medical research.

Then and there,  Smith made a pact with himself to give up smoking and train during the next seven months to paddle the race.

Although Smith’s first paddling experience in Middle Harbour was very embarrassing,  it wasn’t bad enough to deter him.

He remembers he spent about half an hour paddling and about three hours in the water trying to heave himself back on to his kayak.  “A couple of other kayakers towed me back,”  he says.  “And it was just my luck that one of them was a doctor who did lap-band surgery for the morbidly obese.  As I lay on my kayak like a beached whale,  he lectured me on losing weight all the way to shore.” 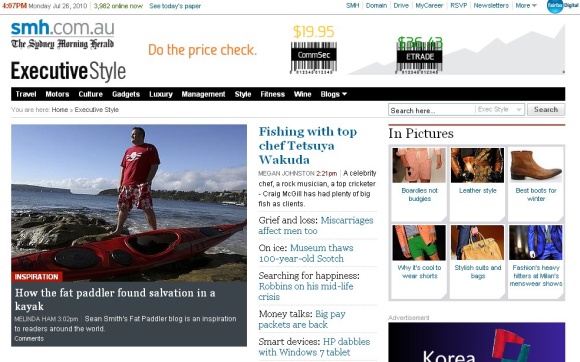 After that,  Smith decided to get serious about kayaking.  Using his background as a digital marketer for the global tourism industry,  he set up his own blog to chart his journey from fatness to fitness over the next few months.  He also wanted to raise donations for the Hawkesbury Canoe Classic.

Since then,  fatpaddler.com has spawned substantial viral success and a worldwide following.  “People started writing to me and saying,  ‘Hey,  I’m fat too,’  or  ‘I’m old or disabled’.  They asked me how and where they should start paddling or what boat should they buy,”  Smith says.

All the while,  Smith continued to paddle Sydney’s waterways and after each paddle he’d post photos and observations on his blog,  peppering them with his self-critical humour and unbridled enthusiasm.

“The best thing is all the interesting people I’ve met,”  Smith says.

“It’s a global thing,  like the Californian lady I met with one leg and then this mysterious but interesting guy from some international law enforcement agency who came over here to Australia to pick someone up but had time to meet me for a paddle.”

While training for the race,  Smith also used travel opportunities with his work to kayak in some amazing places.  In August,  on the west coast of the US,  he paddled with sea lions and sea otters at Monterey Bay in Santa Cruz.  In Chicago,  he admired the illuminated skyline reflecting in the water as he paddled down the city’s river at night.

But the highlight was a trip to Alaska.  He flew north to Anchorage,  took a train and then a sea taxi into the wilderness of Kenai Fiords National Park.

There he met a local guide who led him on a five-day kayak-camping trip to Bear Glacier,  where they slept with an electric bear fence to protect them and kayaked among 10,000-year-old blue icebergs.

“I wanted to find the bluest iceberg possible,”  Smith says.  “They were so unimaginably huge.  We also went right in the middle of a pod of beluga whales.  It was the most magical place.”

With 700 kilometres of paddle training under his belt,  in October last year Smith completed the Hawkesbury Canoe Classic.  He described the feat on his blog as  “a gruelling night of sleep deprivation and pain”.

He wrote that while he watched luminescent algae dance around his bow wake,  he thought a lot about his wife,  Bec,  and young daughters,  Ella and Grace,  and even had some very dark thoughts about quitting,  pulling over to the shore and crying.

“I am now fit,  still heavy.  My blood pressure is normal.  My doctor loves it.  It gets me outside and it reduces my stress level.  I use it as an opportunity to meditate.  When I miss a week for some reason,  I really miss it a lot.”

And training for the Hawkesbury Classic was only the beginning of his odyssey.

Now,  more than a year since he started the blog and paddling,  Smith’s passion for kayaking and for motivating other people to get into the sport are stronger than ever.  He also promotes charity paddles whenever he can.

“There’s a lot of camaraderie in paddling,”  he says.  “If you pass someone you always wave and often stop and say hello.

“And also it’s made me feel closer to the environment,  without being a tree-hugger hippie or anything.  After a period of heavy rain you see all the rubbish and the oil slicks in the harbour – it’s nasty.  It can really upset you for a bit.”

Sean Smith,  aka the Fat Paddler,  will be talking at the Better Boating Lounge at the Sydney International Boat Show. 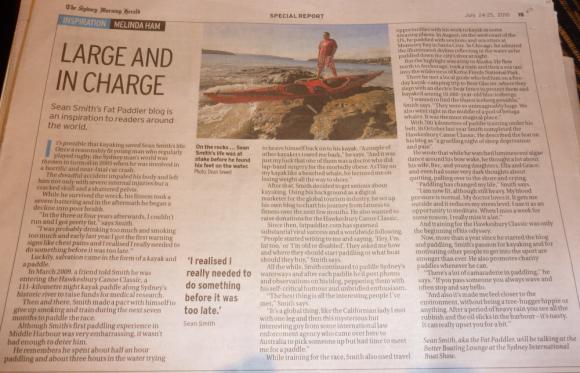 9 thoughts on “Large and In Charge – Sydney Morning Herald”