The stranded horse and paddlers to the rescue

Adventure comes when you least expect it…. unless of course you go looking for it! Gelo and I had organised a canoe session with a couple of fellas experienced in white-water canoing, and had travelled up to the Upper Colo River to witness some flooding that had happened during the week. The river usually sits around 1 metre deep, but the flood waters had passed 10 metres in depth by the time we ventured up there. When we arrived, the river was an enormous torrent of fast-moving water rushing past at incredible speeds and Gelo and I both felt pretty nervous about the situation. Instead of heading with the flow, we ventured upstream in some flood water that had covered up the adjacent road instead.

We didn’t go far before we came across an odd sight. A horse was immersed in the flood waters at the bottom of a steep hill, and we could see a deep furrow where it had slid down the hill, into and through an electric fence and finally into the waters below. Cuts on its head streamed blood and the horse shivered uncontrollably – the poor animal was obviously in trouble.

We continued to paddle until we found a driveway into the property and one of our new mates Chris raced up to let the owner know what we’d found. He quickly returned with a kayak and we led him back to the stricken horse.

The horses owner Ron gave her a quick once over to make sure she was ok. Gelo and I kept her calm and helped Ron remove her coat before Chris and his mate paddled up in one canoe ready to attempt a tow operation to lead the horse out of the flood and onto dry land.

The rescue mission was going well until about 100 metres or so later, when the horse hit a shallow spot and jammed on the breaks. Chris thrashed at the water with his huge white-water paddle but the horse stuck solidly. Even with Ron coming up behind the horse to give her a shove, with one canoe on the tow there was no way to move her any further.

So our next step was to link up two canoes and try to lead the horse out with three of us on the paddle. With my canoe in the lead, Gelo, Chris and I put in a huge effort through our paddles and managed to drag the horse forward once more, until we beached our canoes on the dry bank we’d been heading for.

We all jumped out of our canoes and continued pulling the horse in. However the ordeal had exhausted her and she finally collapsed on her side into the flood waters, as we ramped up the urgency to drag her into land. When we got her to the shore, she was absolutely spent.

Once on shore, all the paddlers jumped on the rope and dragged the horse across the wet grass onto higher ground. Ron then got us to help him as he took stock of her injuries. The cuts on her head and nose didn’t seem too bad but she had nasty gashes on both knees from the initial fall into the water. Ron checked to make sure her legs weren’t broken, and then satisfied she was safe, let her rest after the stressful rescue.

Ron thanked us all for coming to get him and for all the help we’d given to rescue the horse, before setting off in his kayak to race home to gather some medical supplies and anti-biotics. With that, we all climbed back into our respective canoes and continued on our journey into the Colo River floodwaters. Cheers – FP 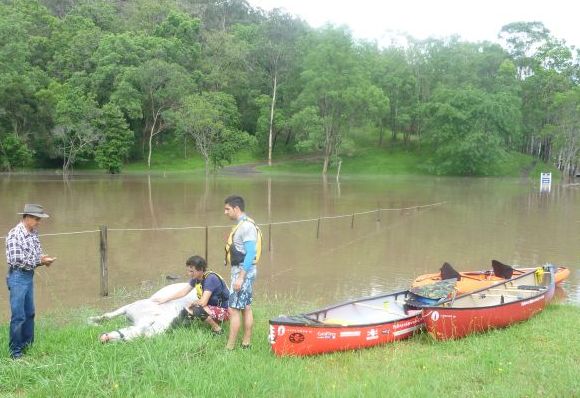 The horse finally able to rest, surrounded by paddlers and canoes