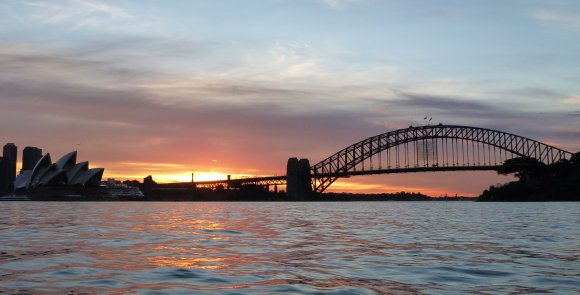 A Sydney Harbour sunset.... what an awesome city I live in!

I’m usually an early morning paddler so I don’t see many sunsets from the water, but I received an invite for an evening paddle from my close mate Nat (a recent convert to the Church of the Double-Bladed Paddle). Pushing off into Lavender Bay, Nat immediately fell in and needed to self rescue, but with that out of the way we paddled out to the Sydney Harbour Bridge to have a look at the city. 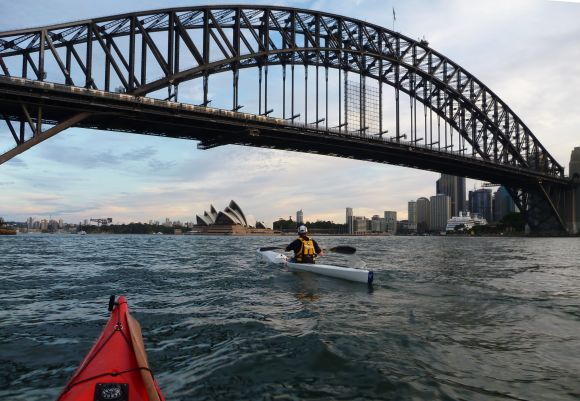 Nat starting to dry off after his swim. Not a bad view from here!

The most incredible aspect of the paddle was the fact the usually busy Harbour was deserted. Clearly Sunday nights aren’t that attractive to sailors or party boats, and we were able to scoot around at our leisure chasing ferries and playing in their wake. We paddled past Neutral Bay before turning into the heart of the harbour and up to Fort Denison, an old prison from Sydney’s early penal history that was now mainly used for corporate functions and parties.

The sun was now almost down and around us the city was swept with burning red light. We cruised towards the Garden Island naval yards, watching bats taking off for the nights hunt and flying above our heads. The short film festival Tropfest played to outdoor audiences a stones throw from where we were on the water, oblivious to the paddlers sliding past in the dusk. 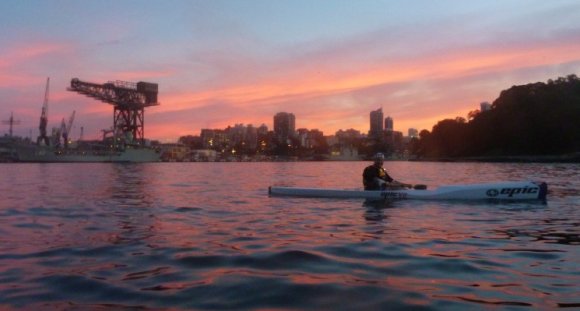 We continued on into Woolloomooloo Wharf, paddling between the super-yachts moored to the expensive Finger Wharf where Russell Crow has an apartment. The lights of East Sydney’s skyline started to come on as the last few minutes of light slowly disappeared, leaving us to cruise the dark waters of the harbour using lit marker buoys for navigation. 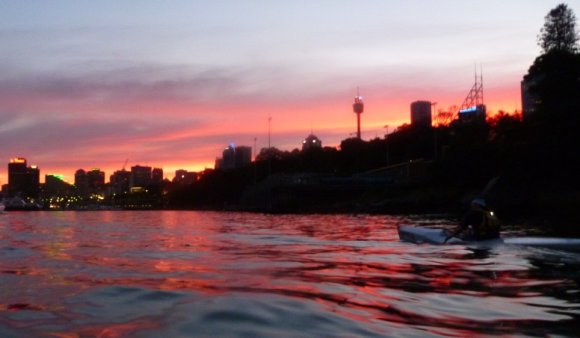 We slowly meandered over to the Sydney Opera House, watching carefully for boats or ferries knowing they probably couldn’t see us (I had the Kayalite blazing on the rear deck and Nat had lights on both the front and back of his PFD, but in a little boat you can never be too careful). This great Aussie landmark is next to Circular Quay, the central hub for Sydney’s ferries, and can be a treacherous body of water to navigate due to the heavy ferry traffic and ridiculously confused waters. We pulled up in front the Opera House’s sea wall so we could look out for exiting ferries, bobbing about in the dark in the messy waves, whilst gazing out at the city of lights of the Sydney skyline. 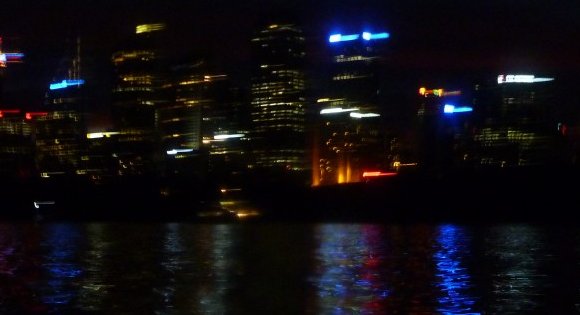 The lights of North Sydney reflected on the Harbour.

Then suddenly three big ferries pulled out of the quay, all heading east. As they passed us a few hundred metres away, the giant Manly Ferry (more like a fast frigate really!) came in from the east heading back into the quay. Between all four of the ferries, the churning wake-waves that they created started to combine, jacking up into huge walls of water hurriedly speeding towards us in the dark. As they hit, we rode nose first up and over the series of waves before hearing them boom as they hit the sea wall behind.

“GO!!” I yelled as we heard the waves hit. Nat in his fast ski took off like a bullet, with me following not far behind, before the first of the huge messy rebound waves caught up with us. I felt the stern of the kayak angle up skyward as suddenly my boat launched down the waves face, the nose carving out a bubbling bow wave as I sped along.  Nat’s ski fired like a rocket, and as I started to drop off the back of the wave, I lost him from sight as he zoomed out across the Harbour.

Behind me were a whole series of giant rebound waves, and I managed to catch each one for 10 or 15 seconds before falling off. Then out of the corner of my eye I saw another ferry passing in the distance ahead of me, and before I knew it I’d hit an incoming wave as I was flying down the face of the one behind me. And then I was airborne, yelling into the darkness as my boat flew through the air before plunging nose first into another wave, submarining the bow before we exploded back up out of the water. This was absolutely awesome!!! 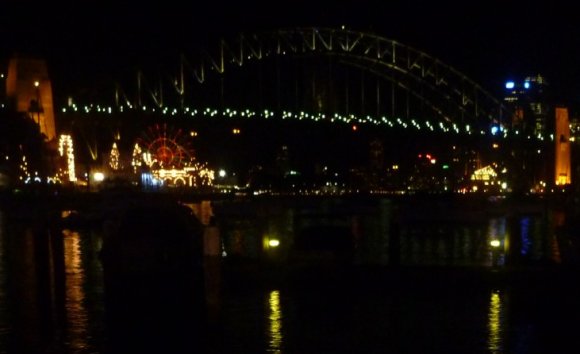 I was getting close to the other side of the Harbour now, with Nat now a good 50 metres ahead. The water was confused from all the ferry action and I battled to keep from being washed into the Milsons Point sea wall, as we made our way back towards Lavender Bay. As we approached the lit-up Luna Park ferry stop however, we had our last ferry incident as an incoming ferry blasted its horn at us as we raced to pass the ferry stop before it came into to dock.  Ahead Nat got broadsided by the churning ferry wake and struggled to stay on board, whilst I shot up the breaking wake right behind the ferry as it passed, flying through the foam and bouncing around in the turbulance behind. And then suddenly the waters were quiet again, as both Nat and I gave a little sigh of relief.

We paddled the final stretch back to our launch point at Lavender Bay. When Nat was off his ski he admitted the whole thing had been amazing, but terrifying. His arms slowly began to unknot from the death grip on his paddle, whilst I just simply sat with a grin from ear to ear on the awesome final part of our Sunday session.  It’s moments like these when you you can do nothing but bask in the joy of it all, and I was in paddling nirvana. This was really living, and I couldn’t have been happier. Until next time, cheers! FP