Lt Cmdr Jones gets ready for the Bridge to Beach paddle/swim event - haha!

Team Fat Paddler started gathering at Blues Point a little after 5.30am. After the wettest April day in about 20 years the day before, the skies looked remarkably clear and the waters calm. A sure sign that the weather was going to turn nasty!

Once all six paddlers arrived the car shuffle began – unload boats, drive to Manly, park cars, return via Sydney Harbour Kayaks to pick up more boats, and then return to Blues Point with 20 minutes to spare.

Lt Burns makes a long awaited return to the paddle. 20mths in fact!

With ten minutes to go paddlers rushed the foreshore to make their way down the single set of stairs to the water. With it being high-tide there was no beach to speak of, so numerous paddlers fell into the drink as they tried various styles of floating mounts for their craft. Those of us with plastic boats simply lowered them over the side of the sea wall and jumped in after them, getting a bit wet in the process but managing to get away through the pack and out to the start line near the Sydney Harbour Bridge. 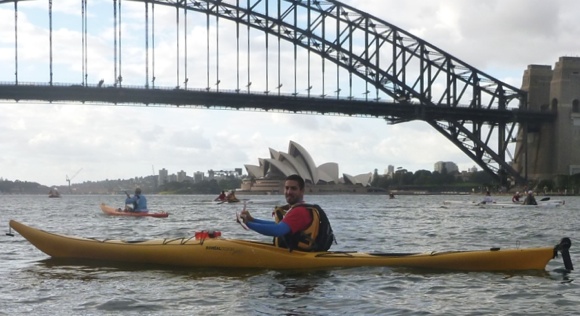 Lt Gelo posing for the ladies as usual. He was insistent on this particular angle

As the racing skis and kayaks jostled for position the gun fired and we were off. Ski paddlers like Sub-Lt Bradford and fast kayakers like Lt Cmdr Jones raced away from the slower kayakers like myself, but I enjoyed the view of the Opera House and Harbour Bridge as I bounced around in the chopped up water.

My concentration was broken by a noise off to starboard. A ski paddler was stationary in the water staring at his paddle in disbelief – his expensive carbon fibre paddle had literally just snapped mid stroke! I had a spare Greenland paddle on deck but knowing no ski paddler would be caught dead racing with one, we organised for Lt Burnsie to hand over the H2O euro to the ski racer, before accepting my spare GP for himself. With a thanks the paddler raced away, promising to return the paddle at the end.

I turned back towards the race, now in the last section of the pack. But somewhere off to my port bow Cmdr Grumm was also having problems. Out of control, his boat veered off to one side cutting off another paddler who promptly rammed Grumm’s boat, tipping him in. As I watched him flounder I couldn’t believe it – we hadn’t even made it to the official starting line (the Bridge) and already he was swimming! 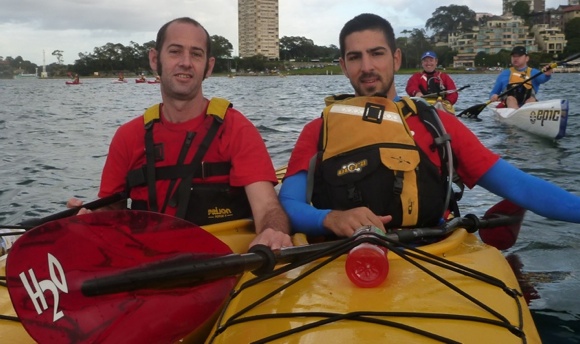 A few of the lads at the start, mere minutes before Grumm fell in.

I turned my kayak around and paddled over to him. The Surf Lifesaving zodiac had also come up behind him and attempted to steady his boat as he managed some sort of barely-graceful paddle-float re-entry. Once he caught his breath, he grabbed his pump and over the next few minutes, emptied the water out of his boat.

Once finished Grumm was away, racing off in his fast boat as I was left to face the fact I was now in dead last position. Lt’s Gelo and Burnsie were now 500 metres ahead of me and I faced the task of trying to catch up. Over the next four kilometres I paddled hard, passing a few dozen slower paddlers and stopping occasionally to help paddlers who had fallen off their boats. I finally caught Burnsie as he rounded Bradley’s Head where we stopped for a quick drink. From then on the water became really choppy and difficult, as wind chop hit us beam on whilst ferry wake and rebound took us from all other sides.  As we paddled on towards Middle Head we came across more and more swimming paddlers, with many of the ski brigade having never paddled anything but flat water. This was no doubt going to be a tough day at the office for them!

When we finally made it to Middle Head the ocean swell coming through the Heads was massive. Towering waves were smashing the south side of North Head sending plumes of spray hundreds of feet into the air. As Burnsie and I struggled in the massive swell, we came across a now familiar site – Grumm being helped back into his boat by the Surf Lifesaver zodiac crew. Burnsie kept going on his course as I veered over to where Grumm was struggling. As I arrived, the zodiac crew were turning him around to face the right direction (that boat of his really needs a rudder!!). Then with a push he set off, taking no more than two strokes before slowly toppling sideways, a guttural expletive exploding out across the water as he rolled in.

The lifesavers had more problems to contend with, with paddlers falling out all about us. Promising to return, they sped away to help other paddlers as I steadied Grumms boat against the waves. We chatted casually about how tough it was and Grumm explained something about a foot-pedal failing, making it impossible to brace. With his boat now barely functional, he’d made the decision to throw in the towel and get a tow back.

When the clubbies returned they hauled Grumm and his boat onto the zodiac and were then away, leaving me again at the back of the pack to deal with the remaining few kilometres. Ordinarily this would have been fine, but the southerly swell was getting worse the closer to Manly I paddled, and the now huge waves were starting to scare me as I attempted to paddle parallel to them. With some waves jacking up to almost breaking point, I fought in my kayak against a constant feeling of tipping, at times flying over the crests of the waves so fast I actually got airborne, landing with a slap on the back of the waves.

After battling the huge swell for 30 minutes or so it slowly started to decrease and I was able to start catching the odd reasonable sized runner or two. I was exhausted from all the bracing and my hips and legs were screaming at me, but riding the swell was helping me to get closer to the finish. Finally, catching a little surf on a baby wave, I slid up onto the beach at Manly and wandered the last 150metres up the beach to the finish line.

Two thirds of Team Fat Paddler at the end. Three of us had stayed dry - haha!

Once I caught up with the boys I got a further update on how the race had gone. Both Lt Cmdr Jones and Sub Lt Bradford had gone swimming like Cmdr Grumm, meaning all paddlers in composite boats had fallen out. All the Tupperware riders, myself included, had managed to stay in our boats. It was a resounding win for the plastic platoon! In terms of placings, Sub Lt Bradford had come in first but Lt Cmdr Jones had been out-sprinted over the last twenty metres by a rampaging Lt Gelo, who was clearly already thinking about impressing the ladies at the finish line. Lt Burnsie had come in next followed by yours truly, with Grumm registering a DNF. 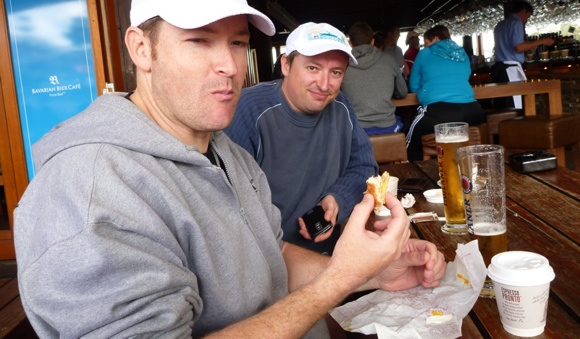 We gathered at the Belgian beer cafe for an event debrief when the paddler who we’d lent our H2O paddle to earlier turned up, insisting on buying us a round of beer for the help during the race. It was still quite early but we all agreed we’d earned the beer and with a table full of McDonalds breakfast and coffees, proceeded to tell our stories of giant waves and swimming. Clearly none of us had come anywhere near the times of the serious racers in the event but the Team Fat Paddler ethos is clearly about fun and bragging rights, and we indulged as best we could.

But the best stories of the day of course belonged to Cmdr Grumm, who’d come out three times and had to face the embarrassment of being towed to shore. To honour him, we decided to put together a (short) highlights reel of Grumm’s morning on the water. Enjoy! Cheers – FP.