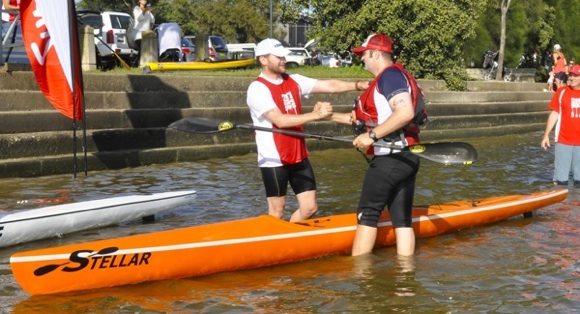 Nat and FP shake hands after another race is over. Nat wins by a little under 2 mins.

It seems an eternity ago that I took up the surfski for the first time. I have to remind myself that it’s only been 10 weeks or so since I first plonked my fat ass into one and began training. I’d set a pretty audacious goal at the end of 2011 to train, lose weight, get fit, learn to paddle a surfski and be ready for the Mauritius Shamaal, a 28km ocean surfski race run as part of the World Surfski Series. I’m no stranger to goal setting, but even for me this was a big one. 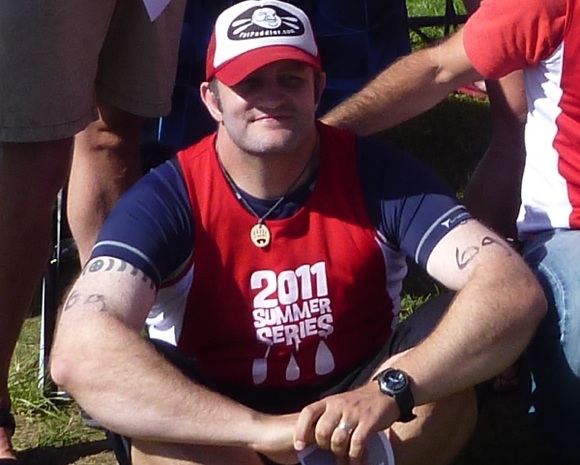 From 133kg to 110kg in ten weeks via good food, hard training, and plenty of discipline.

The training and diet required to meet my goal has been radical. I had a trainer and nutritionist set me a new diet that cut out sugars, fats, processed carbs and other garbage, and replaced them with plant-based proteins, nuts, seeds, vegetables and high-fibre fruit. My daily sessions in the gym combined plenty of cardio (rowing, cross-trainers, bikes) with full body workouts using kettle-bells and core exercises. Self discipline came into it when I decided to give up all alcohol and chocolate, at least up until the time of the main event in June. The combined efforts have seen radical weight loss, huge increases in fitness and particularly large improvements in core strength. 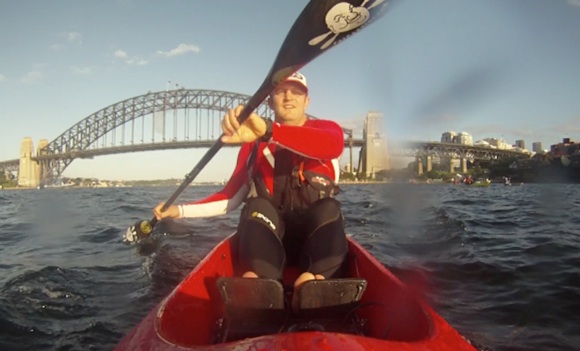 Of course there was the business of learning to stay upright on the surfski. For beginners this is far easier said than done, especially beginners that weigh as much as a small pony. It had taken me several wobbly weeks to come to grips with my Stellar SR as I took her into slightly bumpy waters. Sure, compared to most beginners I was lucky to be using the Stellar SR. It has great secondary stability and is brilliant on messy water. But it wasn’t until I started taking the ski out into the surf south of Sydney that I really found a connection with the boat, a connection that allowed me to accelerate down wave faces, turn at the bottom and be hit by breaking waves side on whilst remaining in the ski. In the surf I also learnt more about my remount, building my confidence as being able to recover meant I was no longer scared to push the boat harder and faster. 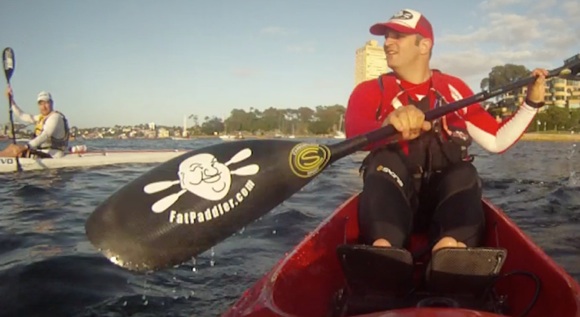 Nat and FP at the “start” of the Bridge to Beach. Let the rivalry begin!

Of course whilst I do this there is a side rivalry going on. One of my oldest friends Nat of SydneySurfski.com, a man I introduced to rugby nearly 20 years ago and who I introduced to paddling 18 months ago, is the superior ski paddler. He’s paddled a ski since day 1 and is lighter, has better balance and far better technique. Where I spent the past year working on my Greenland paddle technique and rock gardening skills, he spent the last year working with some of Australia’s best coaches on getting his forward stroke right. Regardless, the trash talk is going on unabated and the races we take on are heated, despite his 100% record of winning. He also knows I’m somewhere behind him sprinting on the back section of the course, not all that far behind. 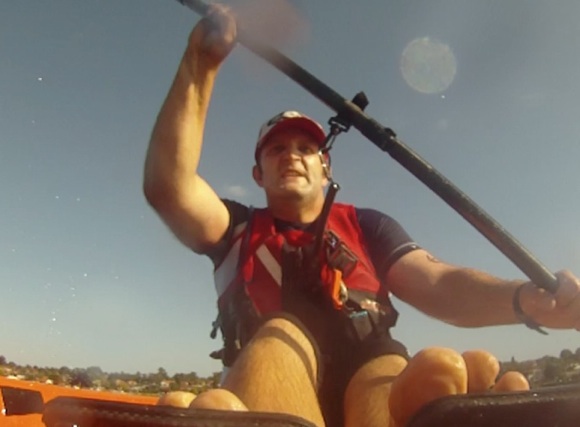 In the recent Bridge to Beach race the dynamic of our rivalry changed somewhat. Nat had worked himself into a frenzy over the preceding days as the weather reports looked like our race was going to be met with big swell and high winds. On the morning of the race he suggested to me that we finish together, a sure sign that he was feeling the pressure and worried I might be close to beating him. Of course he then proceeded to take off like a rocket at the start, leaving me far behind, unable to catch him during this early burst. The result was me paddling solo, battling the chop and striving to pass the other paddlers around me. 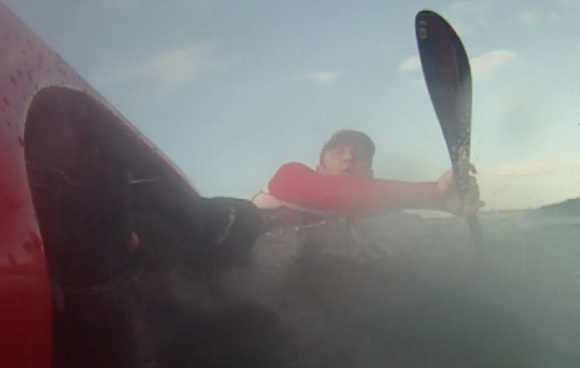 Sometimes you have to gracefully accept the water swallowing you up!

When I made it to the section of the race between Middle Head and Dobroyd Point the water reached ridiculous levels of messiness. Swell coming through the heads bounced off the surrounding cliffs and, together the with wind chop and boat wake, formed a maelstrom of choppy crazy water. As I jumped from runner to runner, making my way through the mess on various waves, I started to smile to myself. I’d lost track of the race itself and had become totally absorbed in the thrill of bouncing my ski around in the chop, loving my connection to the boat and just enjoying the ride as I strung wave after wave together. 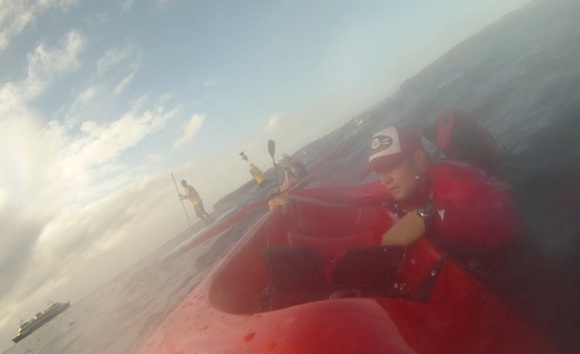 A slight lapse of concentration. Climbing back onboard just past Dobroyd Point.

I came out a few times and ruined my chance of catching Nat, finishing the race some 4 minutes behind him. But despite the banter, all I really cared about was how much I had enjoyed surfing the ski in the mess. It felt pure, liberating, and fun, and all in a deeply personal way. No rivalry was going to get in the way of that, it just didn’t matter.

Of course our race rivalry WILL continue. Nat will keep training with the best coaches, and I will likely be drawn out to sea and into messy waters for the thrill of it. I have no doubt I’ll get fitter than him and want to take him on, but the question remains  – will the racing and winning ever really be fulfilling, or will it be the personal satisfaction of racing my ski against the elements that becomes my core driver? Only time will tell I guess, but in the meantime, keep an eye on our races for the remainder of the year. Cheers, FP

Note: Check out Nat’s great story on our rivalry here. 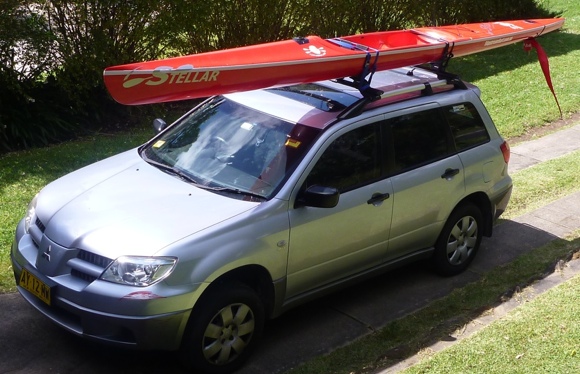