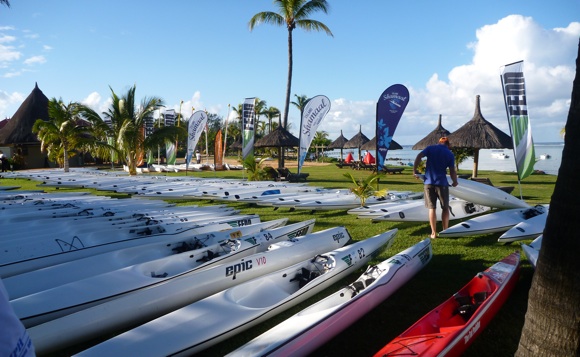 Pre-race scene… could this be the world’s best location for a surfski race?

Nat warming up pre-race in the calm of the lagoon. I don’t think he was quite so calm though!

The race itself would begin with a rolling start throughout the lagoon, a turn towards the Tamassa pass through the reef, a long run down the coast outside the reef, then a hard turn into the infamous Le Morne Channel, a reef pass on the south-west tip of the island. The Le Morne pass is known for ridiculously huge waves both to the left and right, and is the focus of much of the mythology of the Mauritius Shamaal. 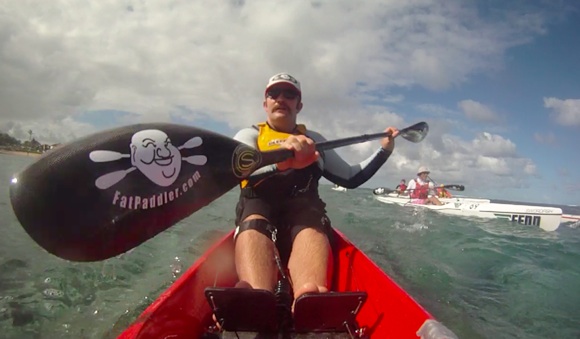 The rolling start inside the lagoon…. game on fellas!

A few laps of warm-up amongst the world’s best professional surfski paddlers and then we were off, heading down the lagoon towards the turn to sea. A few screams off to my left didn’t help my nerves, as unknown to me a pack of paddlers hit reef and bent their rudders before the race had even begun. Nat and I were clear though, making the hard left turn towards the Tamassa pass and paddling into the crazed lumps of breakers and reef-rebound, before cutting out to sea a fair distance behind the main pack. From there we started our paddle up the coast and out to sea in conditions that saw huge swell passing through but not much in the way of runners or anything too challenging.

The conditions changed though as we paddled. The winds picked up and with them the runners started coming, and Nat and I played in the waves, catching runs, sometimes stringing them together, and generally having a blast. We were in no way contenders for the race itself, but be damned if we weren’t going to have fun along the way. In our playfulness however we misread our bearings and realised that we were going to end up as reef-berley if we didn’t head further out to sea. The lumps coming through towards the Le Morne pass were now mountain-like in size, and having to paddle across their faces out to sea was getting more and more challenging as our bodies started to tire from all the rough-water playing. 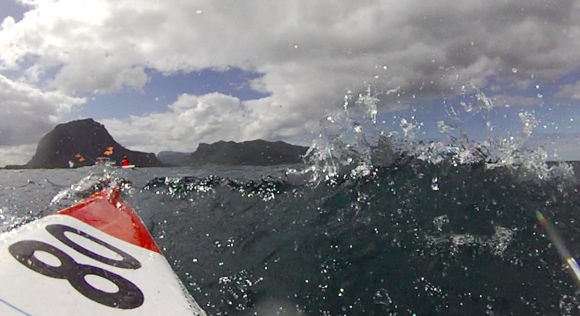 Turning towards the Le Morne channel. How do we get in? Where do we go? And why is my boat sinking??

When we finally turned into the pass, I had a new problem. The wave period was now so short in the stronger winds that each run I caught flooded my cockpit, and I started to worry my boat might be sinking. The poor old Stellar SR had suffered more damage in transit than I’d realised and the day before a whole pit crew had worked to silicon up every possible leak in the boat (there were many). During yesterday’s paddle I’d gained over 20litres of water into the hull…. could it be that the silicon hadn’t worked and I was actually going to sink, 2km out to sea, off one of the worst reef breaks in Mauritius? The fear of sinking and bailing was unwarranted, as a check later showed almost no water in the hull, but at the time the possibility filled me with fear as I considered whether to call in the rescue boat. 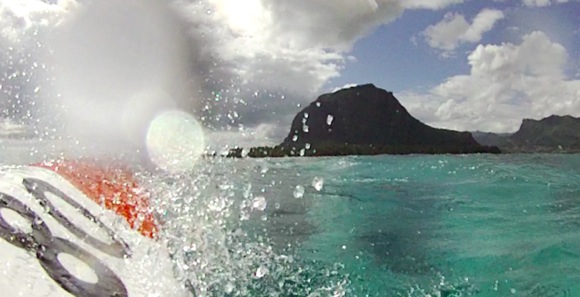 Finally into the Le Morne pass and in shallower water. Still plenty rough though.

The boat didn’t sink though and, following the official race-boat into the pass (thankfully as we had NO idea how to get in through the huge breakers to both the left and right of us!), we finally made it, panting, to the calmer waters inside the lagoon. Nat was lucky enough to catch the last wave into the lagoon and rode it a few hundred metres as I swore at the flat water behind him in which I was wallowing. With a kilometre or so to go on flat water that was actually running against us, if felt like the longest paddle I’d ever done. At least we had a chance to take in the spectacular sight of the Le Morne mountain beside us!

The finish line…. Nat and FP come in last, but happy to have finished!

A very relieved and exhausted FP crosses the finish-line to the cheers of the race crowd. 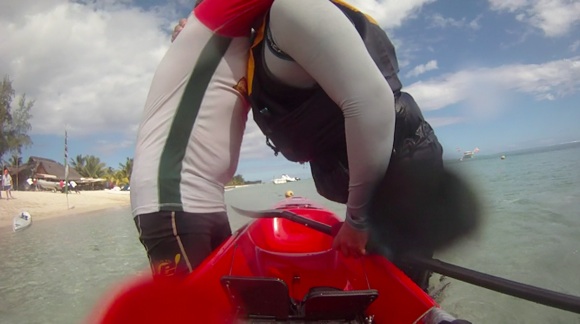 Congratulatory hug from race director Anton Erasmus at the end.

Now on shore, with a plate of food and a cold beer in hand, we got to hear about the front end of the race. McGregor, Bouman and Dawid Mocke had taken out 1st, 2nd and 3rd respectively in what they described as a “fun exploratory paddle”, in a time half that of Nat and my own. The challenge between Team Fat Paddler and Surfski.info had been decisively won by the Africans, and we congratulated them on doing so. We got pulled up onto the podium for coming in last, and gave a quick speech about us “representing the common man”. Then exhausted, sore and happy, we made our way back to the resort. One more race to go! Cheers, FP (to be continued)