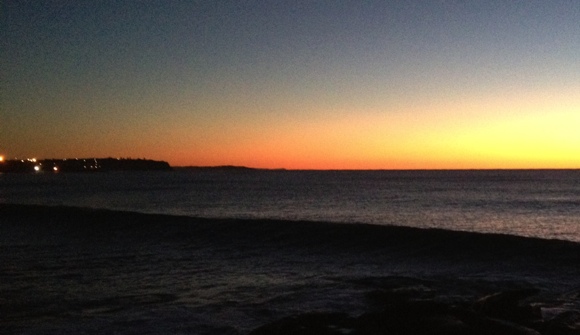 Manly, 6am. Double and triple overhead waves rolling into the beach.

It was cold, it was dark, it was noisy. With a weather forecast of 20-30 knot westerlies plus a good 2m ocean swell coming from the East, I was curious to see if the ocean was going to be safe for a paddle, and maybe even a surf. Looking down at the south end of Manly in the twilight, all I could hear was the roaring of waves smashing into the rocks and sand. For an hour I watched and debated whether to put in here or head inland for something safer, but as the light started to break, and having watched the pulse of the ocean and picked up the set patterns, I decided with the right timing I’d be able to get through the surf zone. 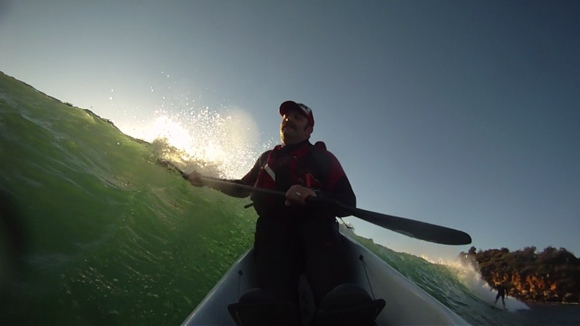 An early wave, with a surfer in the background giving some perspective of size

As it was I set off exactly as the swell dropped briefly and managed to paddle out just as the next big set rolled in, narrowly missing the fun of trying to paddle through walls of white water. After a quick dash to the Bower, I settled in and caught a few smaller waves to get into the groove, before deciding to start waiting for the bigger sets. Joined now by board surfers, a crew of OC paddlers, a few bodyboarders and a lone body surfer, I sat out deep at the back of the line-up, and started to catch the bigger sets rolling in from the ocean. 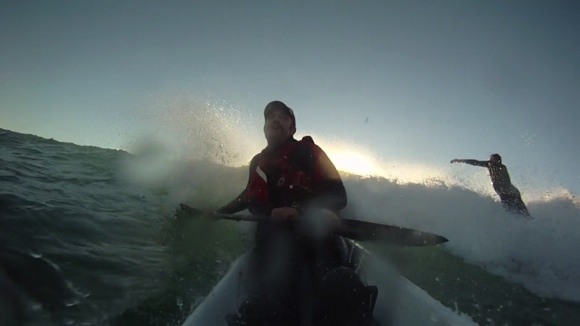 An odd-shaped dolphin seemed to launch out of the water behind me!

As the morning went on, and the tide started to drop, the sets got bigger and more powerful. I’d catch the waves, make a quick right hand turn and then run like hell to get off the waves before they finally broke onto the Shelley Beach rocks closer to shore. As I did so, I started to feel the barrels growing, the sunlight filtering through the greenish waves, and I wondered if it was possible to get barrelled in a 20 foot ski. 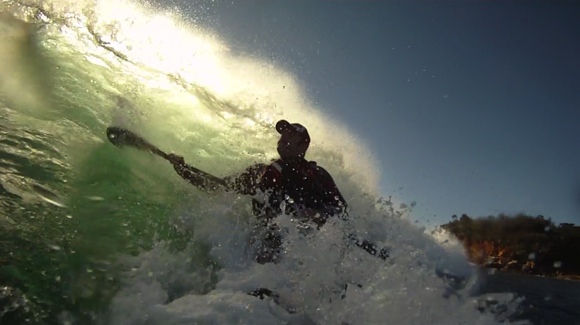 Looking into the Green Room at over 20km/hr! Fast, frothy, wet fun.

For the next few hours I surfed wave after wave, slotting deeper into the pit each time on the bottom turn to see if I could get into the green room. On the final wave of the day I got picked up by a monster which hurled me down its face, burying the first 3 feet of the ski’s nose under the water as it gained speed. Laying completely on the back deck, I somehow managed to stop the ski from doing an endo, before pulling hard into the pit. There, building beside me, was a high overhead wall of glittering green water, curling and frothing as the wave was about to pitch itself forward. I raced across the waves face, leaning into my high brace in the mad hope that somehow I’d survive the pouring the wave was about to dish out. You’ll have to watch the video to find out if I made it! Cheers, FP

Note: For the full experience, this video needs to be watched full screen & loud!