Freddie amongst the surf  with Ben (left) at Manly, Australia

Summer is always mixed down here in Sydney – some days the surf is great, other days it just flattens out and we’re better off watching the cricket on TV. Recently however a little weather system called Cyclone Evan battered Fiji and parts of New Zealand and sent a solid bunch of swell our way. On this particular day, the surf was smallish (1-2m), but solid with swell from the cyclone coming in hard from the North-East. That could only mean one thing – grab the surfskis and head down to Manly Beach. 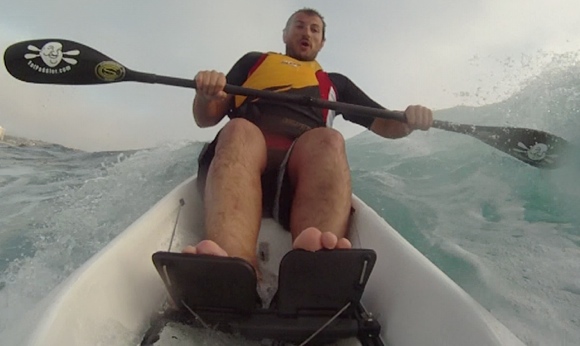 Freddie getting closely acquainted with the Bower whitewater

Joining me were a few mates – Dez Blanchfield from BlastPaddlers.org, fellow Team Fat Paddler member Rob, Ben Stephens from Benefit Active, and an old mate Freddie who’s only paddled a few times and only once in surf (and extremely small surf at that). Hitting Manly at dawn, we launched from the Manly SLSC into the break, getting a trashed a few times on the way out but finally making it through before the short paddle to the rocky point break at The Bower.

The waves were pretty average in size, but thick and solid from their long journey across the ocean. When they broke, they didn’t just collapse and tumble gently down their faces, but instead smashed hard into the rocks hidden just a few feet below the surface. And every ten minutes, a much bigger monster set would roll in, creating nice fat barrels but breaking with a roar into the rocks around us.

So it was that we found ourselves catching sets. Freddie of course was struggling a little, but to his credit he’d come off, climb back aboard and head back out to try again. I didn’t worry too much about him as he’s a big fit lad from the rugby-loving south of France, having played heavens game in his home country, and upon moving to Australia, he’d quickly learned to surf and joined the local surf life saving club. 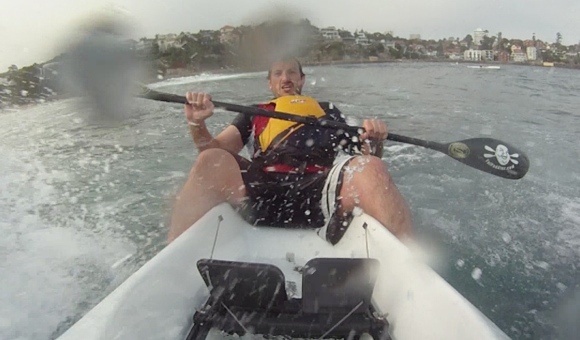 We all got caught some great waves that day, trying to slot ourselves into barrels and stay away from the rocks. We all got smashed that day as well, with all of us taking a pummeling from time to time. Freddie however got the first and second Wipeout of the day, the first where he and ski went over the falls sideways (ouch), then secondly, on recovering from a fall he sat up in the ski and watched a boomer of a wave break on-top of him and smash him into the rocks behind him.

Fortunately we managed to get him back to Manly Beach in one piece, watch him walk tentatively to our local breakfast hangout, and be sure he would live another day. Hopefully we didn’t scare him too much and he’ll come back soon for more…. somehow, I suspect we’ll see him again! Cheers, FP

3 thoughts on “Video: A Surf Lesson with Balls (aka Scaring Freddie)”