Some time ago I received an invite from the Kiwi Association of Sea Kayakers (KASK) to fly across The Ditch and speak at their annual KASK Forum weekend away, to be held at the coastal Waikato town of Raglan which, amongst other things, has the best left hand surf break in the country. I accepted the invite and flew into Aotearoa last week for the event.

I haven’t been to New Zealand for a few years but it is a country I love to visit. The laid-back attitudes, the outdoorsie nature of the locals, and some of the most beautiful countryside and waterways you can imagine can all be found on her green islands. Not that it was looking all that green. The weather systems that usually bring rain had instead turned into the tropical storms that had buffeted and flooded the east coast of Australia. By the time they reached New Zealand, the rain clouds were empty, and the country was in the middle of a major drought. 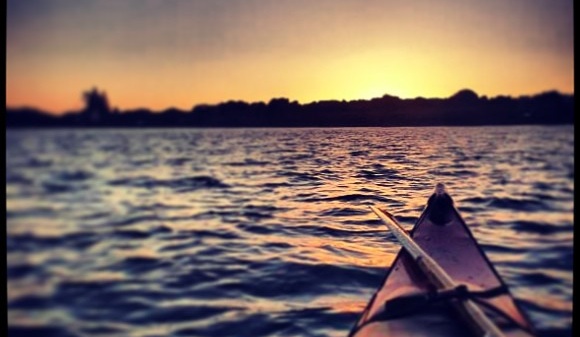 Still, brown sunburnt grass and trees aside, the rugged beauty of Waikato remained, and as we got to the small town of Raglan I was pleasantly surprised by the cosmopolitan flavour of the place. Pubs, cafes, artist co-ops and fashion shops lined the main street, with even more shops and international food stops hidden away in small alleys frequented by locals, backpackers and surfers alike. A beautiful harbour lined with black-sand beaches and a back-drop of wind-farm turbines in the hills beyond completed the picture of this idyllic coastal town.

Wind farm turbines can be seen overlooking the town of Raglan

It was here that sea kayakers gathered on the Friday night for the weekend’s activities. And to kick it off, a demonstration of flares that went from informative to just plain fun, as paddlers struck up a range of marine flares, and all in the name of “testing”. 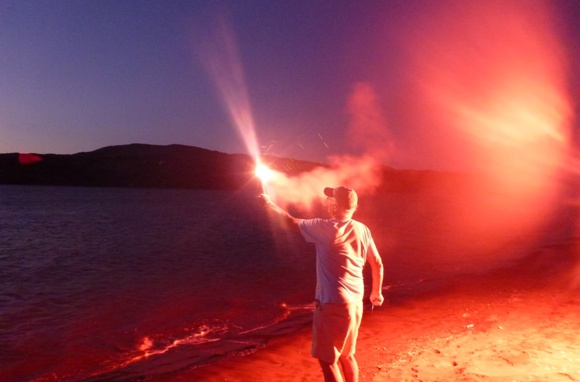 Marine flare testing. Looked to me like people were enjoying it WAY too much! 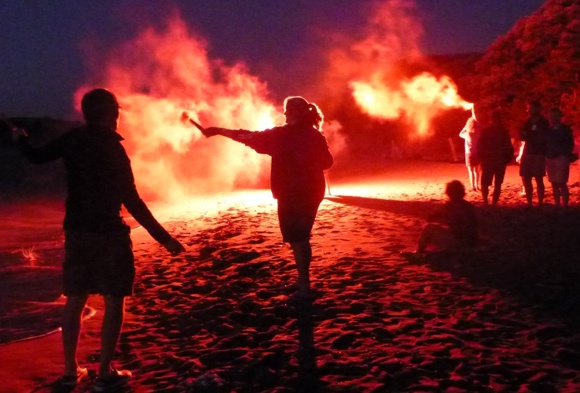 The marine flare testing turning into a festival of light and colour!

The next morning I got out on the water with event organiser John Hesseling for a pre-dawn paddle. It was my first paddle in New Zealand and it was stunning to see the dark sky lighten as the sun slowly rose, the water around me bathed in soft orange light and the distant sight of wind turbines painted in the purples and reds of the early morning sun.

Later that morning the fun continued as the forum attendees discovered their challenge for the day. Split into seven teams, they were presented with sheets of cardboard, a couple of rolls of tape, and an hour to construct a boat. After a flurry of activity, the teams launched their boats on the harbour and raced them until, to the cheers of the crowds gathered on the black sand, they literally fell apart. 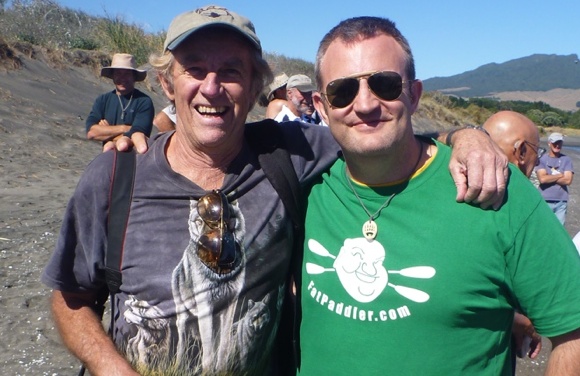 In the afternoon the paddlers could either paddle on their own or take part in some rescue training. I chose to paddle out of the harbour and up to the amazing left-hander for a surf. Nothing huge, since I was in a boat I didn’t know, in waters I didn’t know and with raging currents I didn’t understand. But I still managed to find a nice 1-2 foot left that I managed to surf for 45 minutes or so, before paddling back out to the main channel to play in the multi-directional chop and rebound that was carving up the mouth of the harbour.

Rescue training inside the entrance to Raglan Habour

Later I got on with the job I’d been invited to fulfil – the paddlers entertainment for the saturday night. Over 90 minutes I told stories of my recovery, of challenges and races I’t taken part in, of the travel I’d been able to do as a paddler, and of course showed lots of video footage of Team Fat Paddler fun.

The next day paddlers took on bigger trips, did some rolling classes, or just got out and paddled with friends. It was a relax-day where everyone could just enjoy the ambience of the sleepy little town. For me however the trip was coming to a close, and by lunch I was heading back to the airport for the trip back to Sydney.

Fat Paddlers had hit the KASK event in New Zealand with a vengence!

I’d like to say a big thanks to John, Ian, Paul and the crew from KASK for inviting me to their event. It was a perfect spot for some enjoyable paddling and a heap of fun making new friends. Hopefully they’ll invite me back again! Cheers, FP

5 thoughts on “Sea Kayaking in New Zealand with KASK”