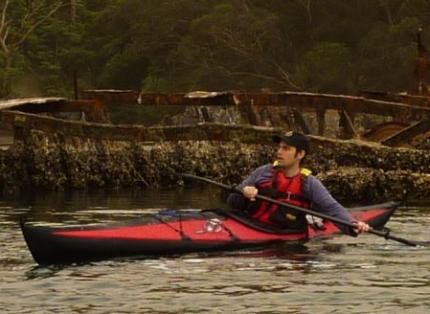 JF having fun in the Folbot amongst ship wrecks

I met Jonathan whilst out on a gentle paddle to Balmoral and we had since organised to catch up for a kayak on Middle Harbour.  Meeting at the very respectable time of 5.30am last Saturday morning, we assembled my Folbot Cooper for Jonathan and head out into 30 knot winds and yet another Sydney dust-storm.

Sunrise through the dust, Sydney Harbour

Besides the work we had to put in to push through the wind and the chop, the benefits of paddling with a writer became apparent quickly as our conversations meandered from American professional competitiveness, to Aussie political apathy, to the Racial Vilification Act, and at various points to the great writings of authors such as Hemmingway.

The dust finally cleared about 8.30am

Jonathan is a New Yorker who has relocated his family to Sydney, where he is continuing to write.  With two previously published novels “A Dog About Town” and “A Dog Among Diplomats“, and a third in the series “A Dog At Sea” due out at the end of the year, JF is well established as a career novelist. But JF is also a paddler who has, amongst other things, paddled around Manhattan, and as of last weekend, managed to successfully roll a Folbot Cooper! 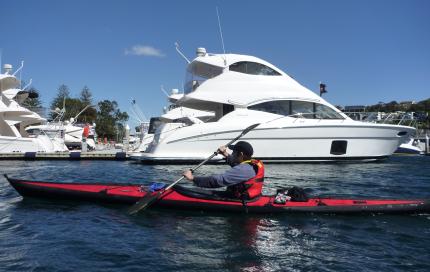 I’m looking forward to more paddling with JF, if anything for the “snarky” commentary on what annoys him most about Aussies (sorry JF, I know I promised not to say that!).  And so I can continue to tell him about the terrible things that happened to me in New York.

An interesting interview with JF on Mysterious Musings.

Paddling to the Dark Side – Watsons Bay

3 thoughts on “Paddling with US writer JF Englert”