Paddling the Hawkesbury At Midnight 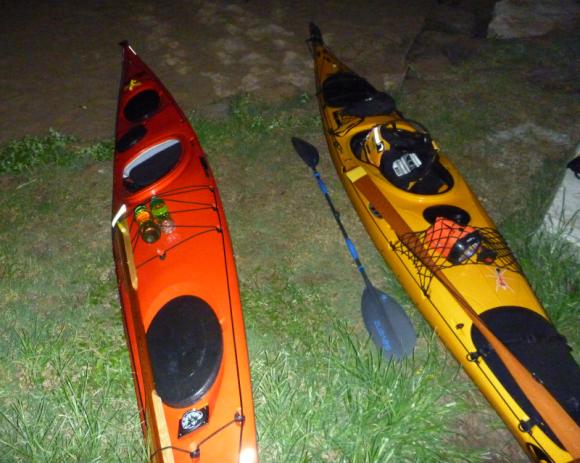 Boats in the darkness, banks of the Hawkesbury River

A busy weekend schedule meant no paddling unless I could get one in late at night, so I contacted paddler mate Ned, the engine room of the Team Fat Paddler fundraising efforts, to see if he was interested in meeting up somewhere. We decided to meet up at Mooney Mooney on the Hawkesbury River, known to many paddlers as the finish point for the Hawkesbury Canoe Classic, sometime around 9pm.

Ned of course managed to take a wrong turn somewhere and ended up on the wrong side of the river, but after doubling back we finally met up and a little after 10pm we pushed out into the inky darkness of the river. 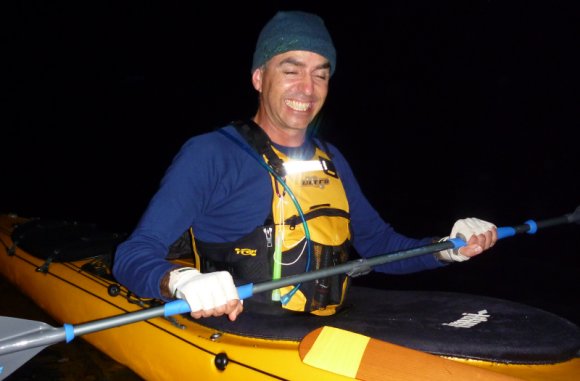 After a quick discussion we decided to head towards the sea. As we reached the Mooney Mooney Bridge, we paused to adjust the boats and discovered that the current was rushing down the river in the direction of the ocean as the tide went out. As we passed into the darkness beyond the bridge, Ned made the brilliant suggestion to turn north up the Mooney Mooney Creek, which quickly found us bottomed out on a shallow expanse of mud! So we doubled back and decided to follow the channel markers into the darkness, moving us ever closer to the un-seen ocean somewhere in the distance.

Over the next few hours we paddled under the stars, passing under railway bridges, sliding silently past the odd party on a boat or house, and discussing the usual stuff mates talk about when out alone. Then finally, we decided we needed to head back against from the strong currents moving us further and further away from our put-in point.

At this point the incredible connectedness of the modern world interrupted our paddle through the night. Ned’s phone rang with his wife Megan giving me the news that old mate Burnsie had just become a father, with his wife Naomi giving birth to a gorgeous baby girl. Megan had found out via Facebook… and was now telling me at midnight as I floated down a river through the countryside!

We continued our struggle against the outgoing current when rain started to gently fall. We discussed how nice it is to paddle in the rain when a strange rumbling noise started to rise in the distance, which increased in volume as whatever it was got closer. Then we realised it was heavy rain rapidly approaching us from the hills to the south. And then it hit, hard driving rain that pummelled us on the river. 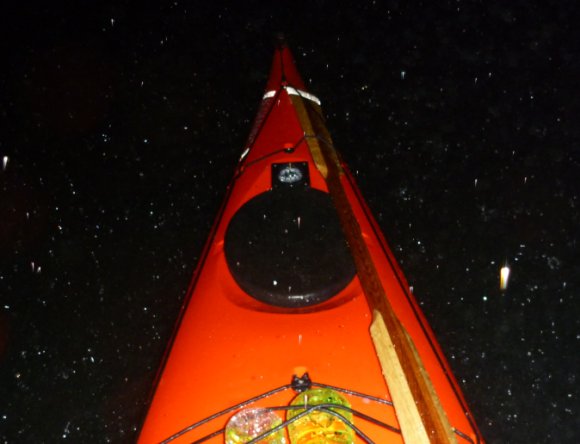 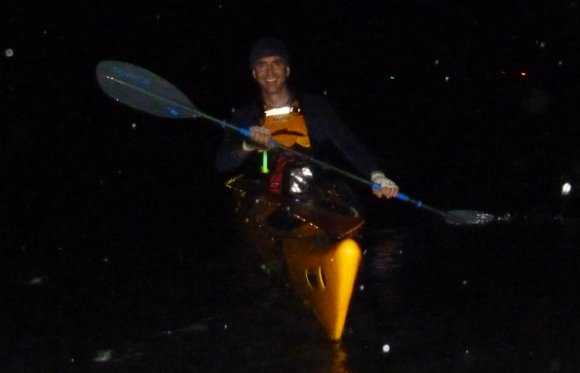 Ned paddling through the rain 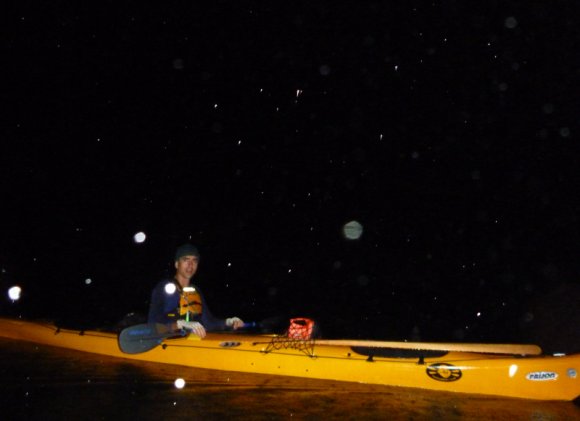 Rain masquerading as snow in the camera lights 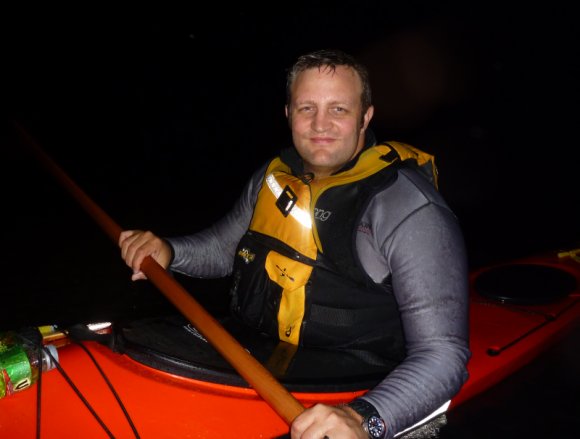 Within minutes it passed and we listened as it continued its rumbling sound northwards before striking back out against the current.  Then after another 30 minutes of paddling, and fighting the tidal race at the river’s choke point at the Mooney Mooney Bridge, we finally pulled into our launch point to pack up, at the respective time of 1am.

As we packed up and chatted about the paddle we’d just done, I noticed a bit of movement in the grass near the boats. Getting a bit closer, something scampered away from me before doubling back and coming straight out to face me. There looking at me with its big eyes and pink nose was a young fearless Brush-Tailed Possum. 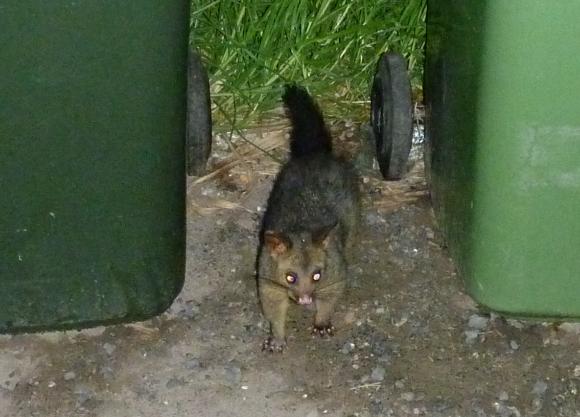 Hey there little fella, how are you going?

Now these may look cute, but they have razor-sharp claws that can do real damage if you try to handle them. I once had a staffy bull terrier that caught one in our backyard and was feeling very smug before it turned on him and with a single swipe, carved his eye-brow clean out of his skull. You’ve never seen such a tough-looking dog whimper like such a little sook, but possums can be remarkedly violent when cornered or annoyed.

The possum got bored of my attentions and went back to foraging for food, but before long another visiter turned up, an older far bigger male with a bad smell and a nasty case of mange. This fella was no-where near as cute as the little one, and started to stalk me across the car-park! This one just looked like he was itching for trouble, and I nervously back-pedalled away from him. 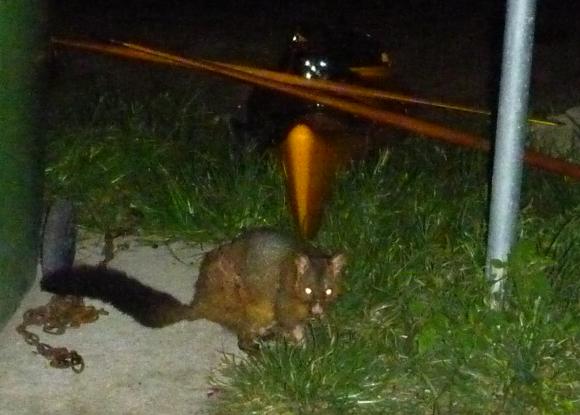 As we packed our boats and gear up, this demon-possum kept stalking us around our own cars, clearly looking for trouble, and getting on both Ned and my nerves. Finally I lost patience and stood my ground, armed with my trusty Adanac Greenland paddle, and faced him front on. This didn’t scare him at all and as he continued to stalk me I had to give him a little tap on the nose with my stick. At that point he decided maybe I wasn’t going to be his dinner for the evening and he casually wondered off to stalk some fishermen who had just arrived instead.

From there we finished packing, said goodbye and got in our respective cars for the long drive home. A magical paddle under the stars with a good mate finally finished… cheers, FP.

6 thoughts on “Paddling the Hawkesbury At Midnight”