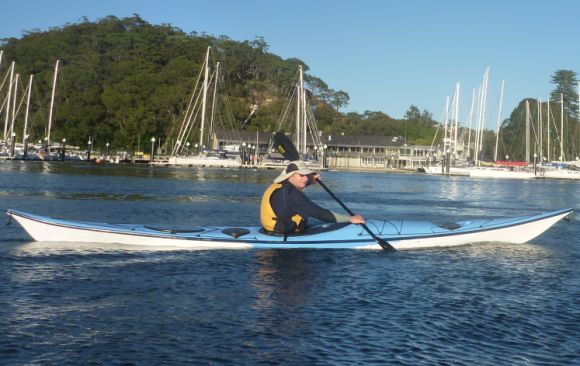 Timbo, trying to dry out in the early morning sun

(Continued from Part 1) Both wet from our respective spills, Timbo and I paddled up to Bantry Bay in search of warmth and a hot cup of black gold from the Coffee Boat. On approach to Bantry Bay we could see the little gold tug boat handing out coffees to moored pleasure cruisers  so we hurried over to position ourselves in the queue. Before long, Garry the coffee boat man was handing us two large coffees, which would have been great for Timbo had I not insisted he do a roll for Garry’s enjoyment! Newly wet after his rolling demo, he appreciated that hot coffee more than ever as we rafted together for our floating coffee break.

Once done we figured the extra high tide would make Scotts Creek accessible for a gentle cruise. Tim had only ever been a short way into it, so we took off to see if there was enough tide to get in. 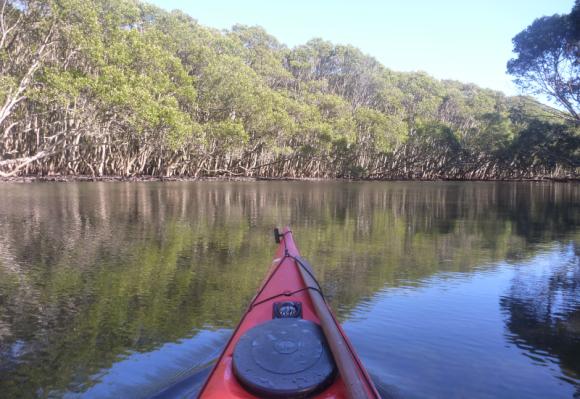 The entrance to Scotts Creek

On arrival we found about 8 inches of water at the entrance (the shallowest part of the creek for quite a distance) which was enough to glide in. The mangroves are mesmerising, encroaching from all sides as the creek narrows to about 6-8 feet wide. This is one of Sydney’s real paddling treats, a lost wilderness in the heart of Sydney, and after our excitement of the morning, it was a perfect way to relax and enjoy the slow drift. 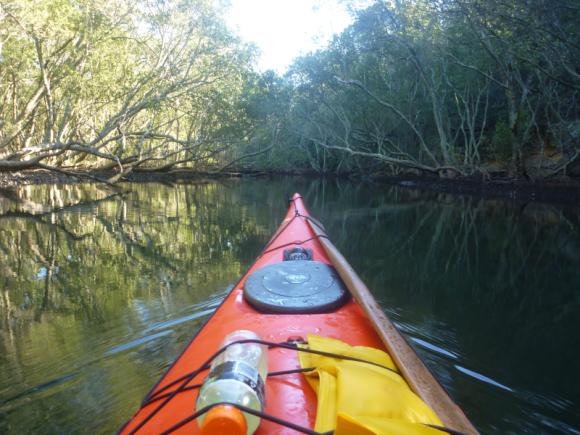 Moving into the start of the creek 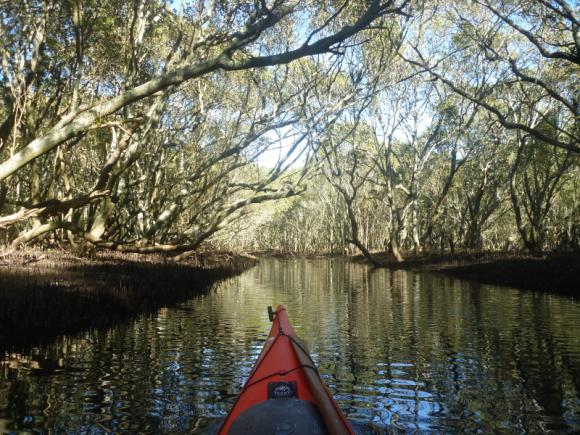 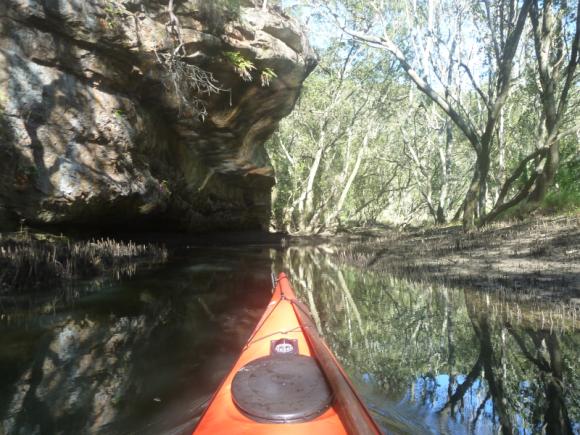 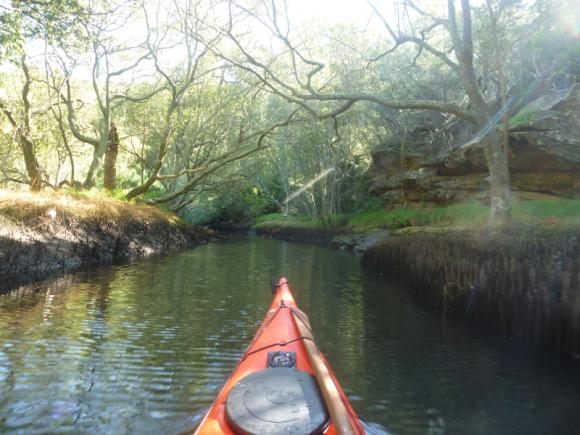 Getting deeper up the creek 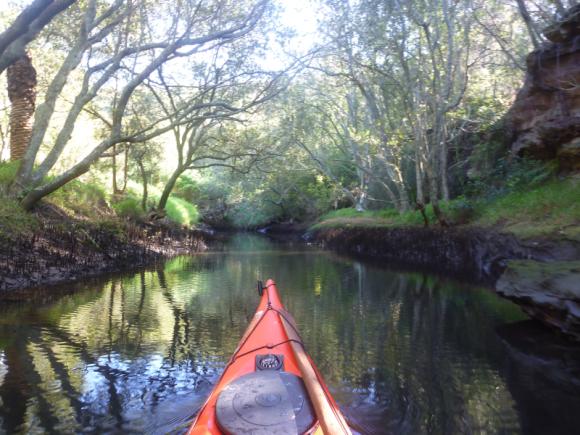 And finally we run out of water

Once we hit the dry end of the creek we turned around and slowly cruised back out into the Harbour, where we embarked on a hunt for a, err, “nature stop”, which was necessary ofter the buckets of coffee we’d drunk.  Much of Middle Harbour is either cliff or private houses, but eventually we pulled up on a sandy beach for a toilet stop with one hell of a view! 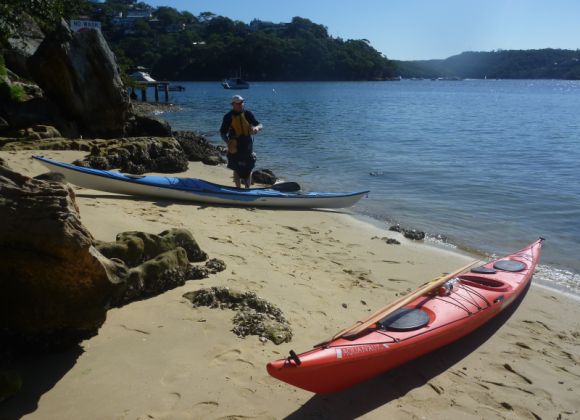 All that was left was a gentle paddle back to The Spit, where the local café would again provide us with caffeine. Once back, we left our boats on the beach to grab the coffees, but when we returned, the only boats on the beach were Timbo’s blue kayak and a few yellow hire boats. The Scarlett Woman was gone! 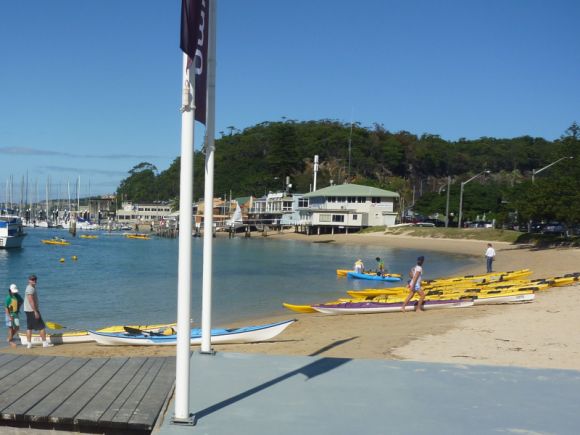 Lots of kayaks... but no red ones!

A few minutes of panic ensued as I searched the local carpark, the Sydney Harbour Kayaks shop and the grass outside, before I suspected a rat and returned to the beach. Then if wasn’t long before I spotted my beloved Valley Aquanaut in its hiding spot, to the laughter of the SHK boys who had obviously got me. 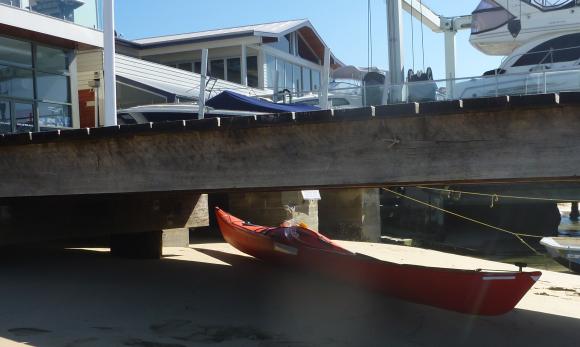 At the end of our paddle, Timbo and I reflected on the crazy morning. We’d spent over 5 hours on the water; we’d seen the sunrise over the Tasman Sea, experienced a massive tide rushing into big ocean swell, surfed, rock gardened, and both stacked our boats, had coffee on the water, explored the beauty of Scotts Creek and had a nice relax on a harbour-side beach. Not bad for a morning session! Cheers – FP