Helen Wilson - can actually fit in a Tahe Greenland (unlike FP!)

In the sleepy liberal town of Arcata in northern California can be found world-renown Greenland roller Helen Wilson. A multiple medal winner at the Greenland National Kayaking Championships (2008, 2010), her qualifications as an expert in the art of Greenland-style kayaking are beyond question. Dressed all in black and nestled inside her sleek Tahe Greenland kayak, she is like a paddling martial artist, flawlessly running through her kata of 35 different rolling techniques developed by the Inuit seal hunters of old.

G-styles... more time in the water than out of it

The style is not without controversy however. Many contemporary sea kayakers mock the Greenland sport as nothing more than a nostalgic art using ancient equipment. The Greenland paddle favoured in the style also has its share of detractors, with some claiming them unable to be used for the rigours of the modern paddler at sea, and at best only useful as an easy to stow spare. 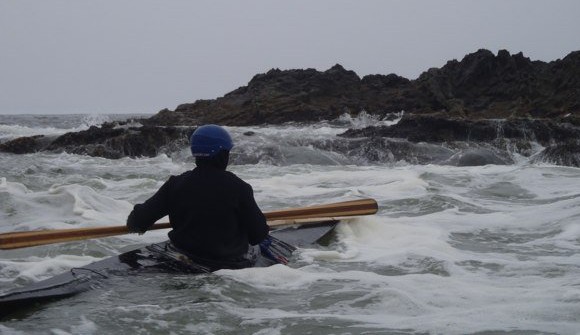 Helen in the froth... maybe you CAN use a Greenland paddle in moving water?

When asked about this Helen just smiles and nods. She’s heard all the put-downs from the detractors and is well aware of the views that Greenlanders can’t surf, roll their boats safely in dangerous conditions or mix it in heavy sea states with their contemporaries. Her response is not one of words, but of action. “Whatever”, she smiles mischieviously “and excuse me, I’m about to take my Skin On Frame kayak out to the cliffs off Trinidad”. 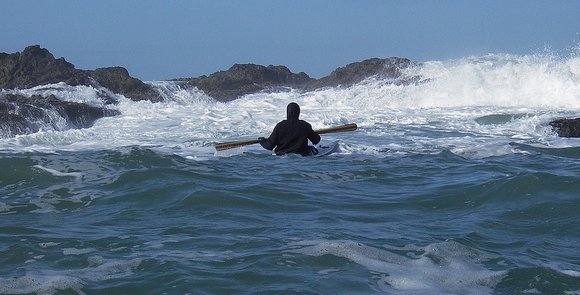 A quick look at photos and videos of her paddling exploits drives home the point. She relishes the rough coastal conditions along the northern Californian coast, smiling broadly as she surfs and combat rolls her various boats amongst the area’s many rock gardens.  She has paddled with members of famed extreme kayakers the Tsunami Rangers, even instructing them in the art of rolling with Greenland paddles.  Her entire attitude is one on nonchalance – say whatever you want, she’s going to just go on enjoying her sport and using her skills to go places others fear to go. 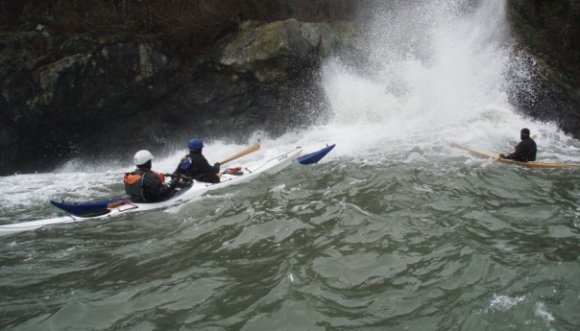 The cliffs of Trinidad, including the famed "Smack Wall", make a fun playground for paddlers

Complementing her extraordinary paddling and rolling abilities, Helen’s one true passion is passing on her skills to others. She has been able to break the core components of the art into a couple of simple, easy to learn steps that she passes onto the paddlers lucky enough to attend one of her sessions.

In 2010 she took her teaching further by releasing an instructional DVD titled “Simplifying the Roll with Helen Wilson“, which is fast becoming the “must have” resource for both new and veteran rollers. That same year she came up with the Transitional Stick, a teaching aid aimed at progressing paddlers from their full-length paddles down to the shorter norsaq and eventually to hand rolls. Canadian paddle maker, Joe O’Blenis, worked with her on the design to make the T-Stick a reality. 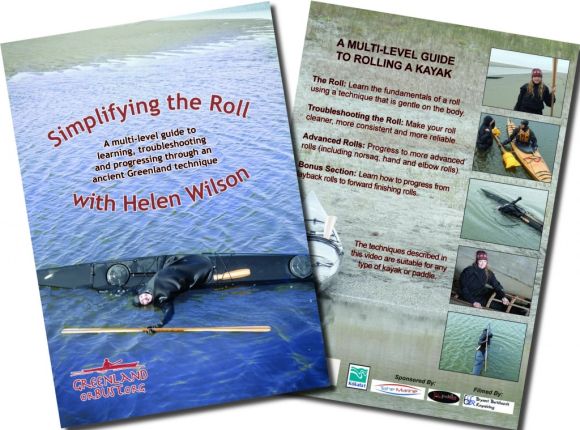 News of her skill as both a paddler and instructor has spread quickly off the back of her DVD sales and she now travels the world teaching Greenland rolling skills at kayak symposiums, club days and private lessons, her schedule almost full from the extraordinary demand for her services. Between teaching commitments she writes articles for quality publications such as Sea Kayaker and Ocean Paddler magazines as well as contributing where she can to Qajaq USA, the American body dedicated to teaching the ancient traditions of the Inuit hunters of yesterday. 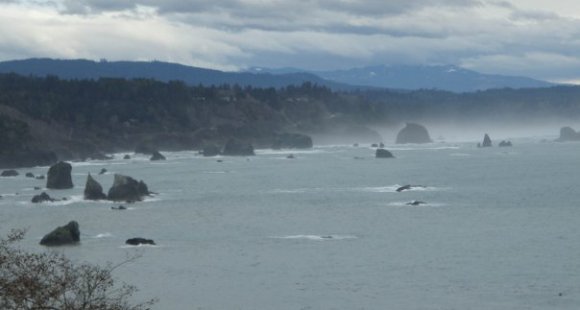 The northern Californian coastline - could this be paradise for paddlers?

As her global image continues to grow, even her detractors are having to begrudgingly grant her respect. Perhaps she is finally proving to the world that the Inuit people, with thousands of years of development amongst the icy waters of the arctic, might just have developed some useful skills after all. Not that she really cares mind you, she’s probably just out surfing somewhere. 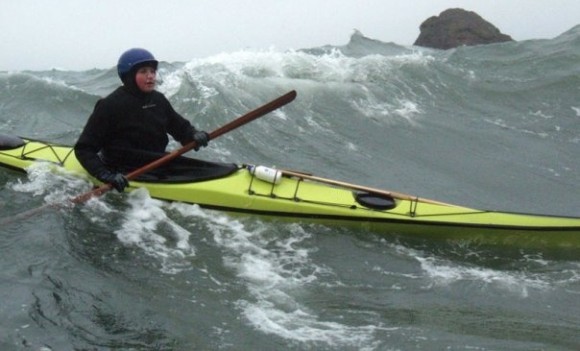 Bouncing around in waves is fun!

“Simplifying the Roll with Helen Wilson” DVDs can be purchased directly from this website for Australian and New Zealand customers, or  from Helen’s own website GreenlandorBust.org. The Transitional Stick is available online from JoeOPaddles and will also be available in Australia shortly from Greenland Downunder. Cheers – FP

*Images used with permission thanks to Helen Wilson and Jim Kakuk