Sunrise from the sea..... could there be anything more magical?

You just never know when an adventure might befall you, but one thing for sure is that you have to put yourself out there in case it does. On this particular morning Grumm, Nat and I arrived at The Spit at 5am, with the temperature having already climbed to 30C degrees. We set up in the dark, with me getting a chance to try out my new Kayalite lighting system, before pushing off headed for South Head.

South Head in the distance - as seen from Nat's ski

The run out to the Heads was pretty uneventful, other than being ridiculously hot. I’d decided to paddle topless, with only my PFD for cover, but I was soon shining with a layer of perspiration as we paddled against the tide towards the ocean. The other lads were feeling it too and whined a little about the heat. Then out of nowhere, Nat screamed like a little girl and his ski seemed to almost tip over before righting itself again. It seemed a tiny little fish had jumped into his boat, scaring the pants off him until if freed itself by plopping back overboard. With a good laugh, we all continued on our way.

The marine forecast had the sea state dropping from a 2-3m swell down to less than half a metre, but it seemed we’d hit the water before this was due to happen, because as we paddled past South Head a series of two and three metre waves came through, throwing us around a bit before smashing against the sea-side of the Head.  Then as I was looking behind me at the waves crashing, Nat suddenly called out “SHARK” and started pointing to a spot ten metres in front of our boats.

I peered through the early morning light at where he was pointing. Then sure enough, a dorsal fin rose up through a wave, trailing a tail fin behind it, and slowly cruised past us all, missing Grumm by just a few metres. The dark-tipped fin was about 4 feet in front of the tail, so at my guess she was about 6 feet long, and most likely a Bull Shark. As we watched it cruise on into the Harbour, we were both ecstatic and edgy about the experience. One thing for sure, none of us felt like falling in now, and we paid a little more attention to bracing though the incoming waves.

FP coasting in a small lull between the bigger swell, minutes after the shark sighting

The sky was now starting to burn. As the sunrise grew closer, the horizon turned a firey red, painting the cliffs of Sydney and three paddlers a brilliant reddish orange. I sat staring breathlessly at the horizon, humbled by the incredible experience we were having out on the bumpy water. 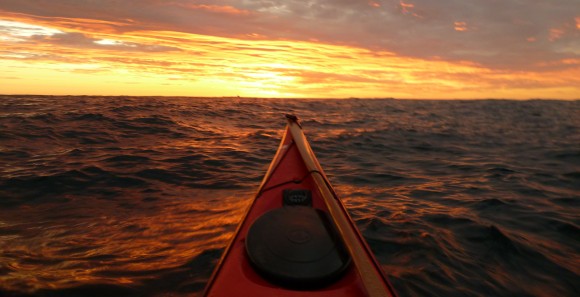 Oh yeah, this is why we come out at sunrise!

By now some bigger boats were making their way out of Harbour heading for deeper waters, and the mixture of swell and criss-crossing boat wake started to make our time a little more difficult. Grumm had been struggling in his narrow boat, a little nervous after seeing the noah cruising past earlier, and the added lumpiness was making him more and more nervous on this, his first time out of the Heads. Eventually he decided he’d had enough and turned to ride the swell back into the Harbour. Nat hung around for a while but decided to follow him, leaving me on my own out at sea. Looking back at the horizon however, I was almost glad that they’d left me here to enjoy the incredible view of the breaking day. It was just me, the waves and the sharks. Beautiful. 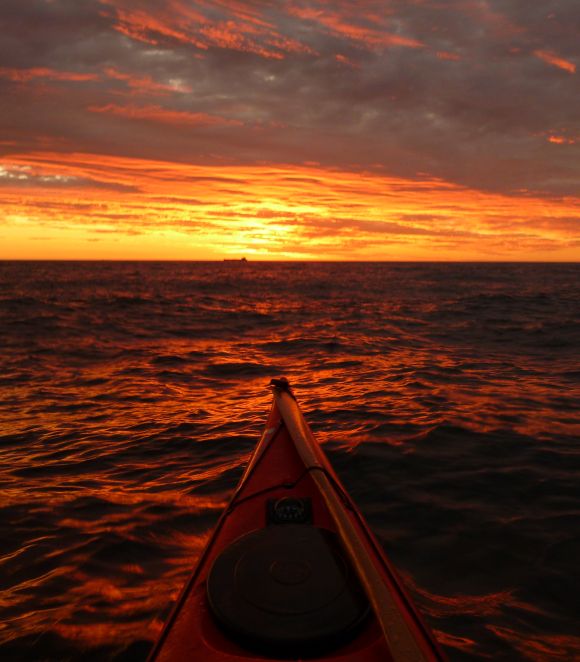 What a magnificent world we live in. You just need to get outdoors to experience her!

Once the sun was up I turned and tried to find the other boys. They were a good way into the Harbour now, about 1.5-2 kms away, so I started riding the swell runners, bracing and giggling to make sure I stayed out of the sharky waters. After 15 minutes of sprinting down waves, I finally caught them up half a km from the Grotto Point Reserve. It was still early, before 7am, so we turned and head into a little beach in Manly to stretch our legs, have a swim, and tell tall tales about the now “massive” shark we’d seen!

After a relaxing 30 minutes swimming, we climbed back into our boats and followed the cliff line back to The Spit, in the now very gentle waters which had calmed down considerably since we were outside the Heads.  We cruised right up against the cliff face, enjoying the movement of gentle waves rolling in, before finishing the final few kms back to where we’d started. 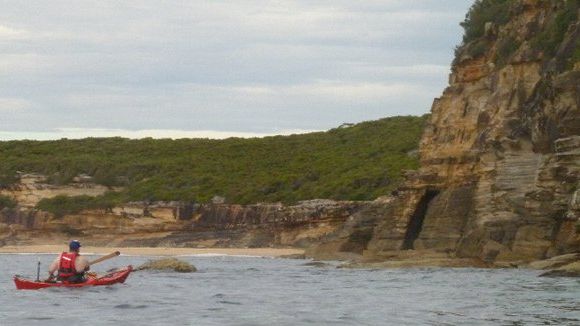 We arrived back at the put in at 9am, our paddling done for the day. After packing the boats up, there was really only one thing left to do, and that was to wander down to the Middle Harbour Yacht Club for egg/bacon or egg/sausage rolls for breakfast! A great way to wrap up an awesome paddle. Cheers – FP 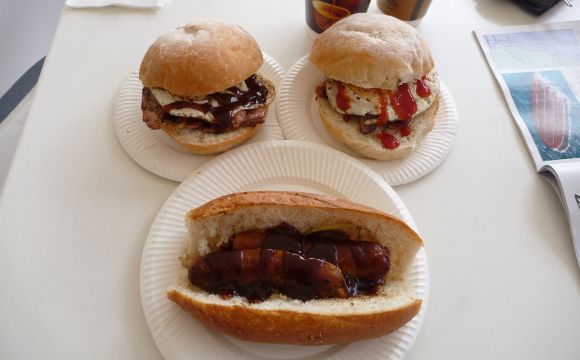 8 thoughts on “Sunrise Paddling With Sharks”