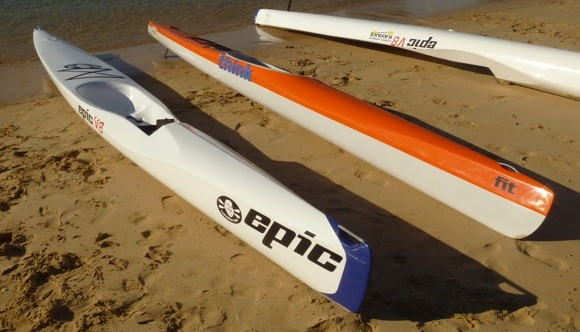 Welcome to the first guest review on FatPaddler.com! Team Fat Paddler Sub Lieutenant Nat Bradford is a recent convert to the ocean-ski genre and is enjoying immersing himself in the new world of paddling that is opening up for him.

[Author: Nat Bradford] Being very new to the whole surf ski caper, my introduction to the water on the Epic V8 has been a great experience. The boat is stable – really stable. My first test runs on various skis involved me under them more than on them, but with the Epic V8 I was able to get underway and stay upright without needing to resort to major pilates-style core strength and balancing exercises.

So after six months of trial and error, and a life changing lesson from Jim Walker (thanks again for making me paddle with you and the tinny attached to the front of the ski, Jimmy), I’ve now completed a few races and countless acts of lunacy with Capt FP and have become a very low skilled surf skier (see what happened prior to my lesson, below).

I’ve become very comfortable with my Epic V8, but the recent arrival of the stunning looking entry-level ski/kayak hybrid, the Think Fit, had me intrigued. On first impressions it looks as though someone had stuck the front of a Think Evo to the back of a sea kayak and just blended them together. That’s not to say it doesn’t look good, it’s just hard to get your head around. Further cross-dressing comes in the form of a raised seat within an enclosed cockpit, a-la sea kayak, but with ski-style rudder pedals. It also has the option for a kayak skirt, and a small day hatch behind the seat that could prove useful on long hauls. 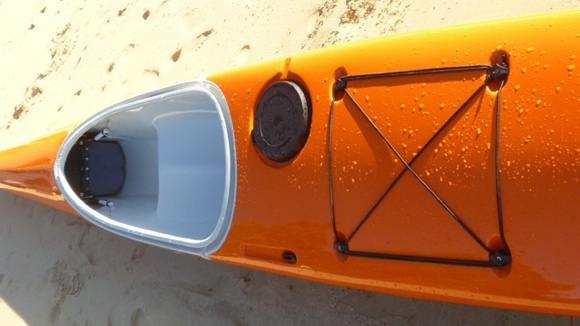 Without too much thought, I jumped in and set out from Sydney Harbour Kayaks on a quick shake down paddle. I’d initially left the pedal length too short, but wanted to see just how tippy the Fit felt in comparison to the Epic, and with my knees in my chest this wasn’t going to be a hard task. I was surprised by just how far you could tip without falling out, but suspect if this was the first boat I’d ever paddled, I may not share that sentiment. My other impression, possibly because of its roughly 2kg weight advantage over the V8, was that it was faster from a standing start to  top speed (at least the top speed I could manage). This was after adjusting the pedal length, which was a little trickier than expected due to the screw in mounts versus the quick release plugs on the V8. And one major plus on the side of the V8 – a ruler next to the pedal adjustment/heel mounts makes for matching both sides up just that little bit easier – the simplest ideas are often the best. 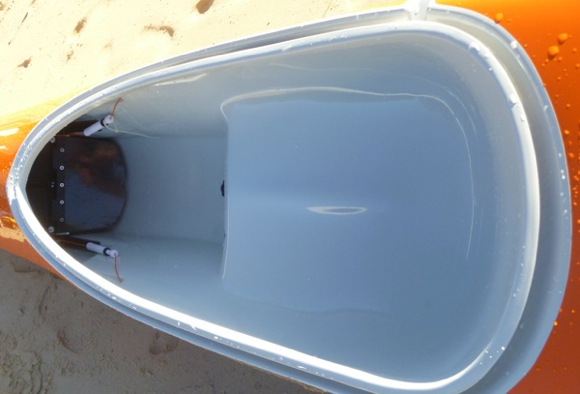 But if I’ve learnt one thing from my short time in skis, the one who spends the most time on top of the ski is going to have the most fun. Through necessity, I’m now very proficient at self-rescue so when the inevitable spill happened, I backed myself to be back in the Think in no time. However, the design differences between the Epic and the Think become very apparent at this point, as I drifted into The Spit channel after attempting and failing to re-enter the Fit about half a dozen times – on the one hand I’m glad no one saw me flailing about, but on the other hand I’m not sure anyone was coming to help if I got really stuck. It seems to be a much less forgiving boat to get back into and I imagine this will deter newbies keen to learn the ropes. It’s not that the basic re-entry technique needs to change much, but the action of having to swing your legs into an enclosed foot well is a whole different skill that I’m sure our sea kayak friends know well, but one I’d guess most skiers just aren’t that used to. 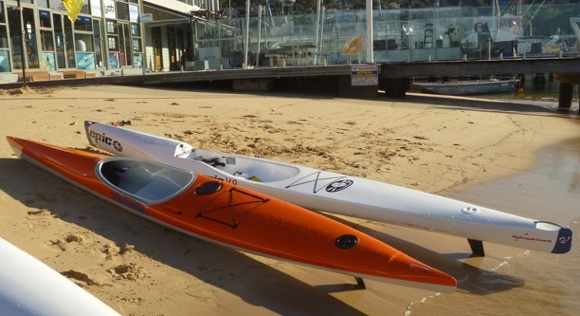 Back on dry land, I had a chat with SHK’s Candice who’s running paddle fitness training sessions with both the V8 and the Fit – she also thought the Fit was likely to be tippier for a beginner, but that its weight advantage might be better for lighter paddlers and women (ie not someone wearing a TFP t-shirt, for example). We both agreed it was hard to be too critical though given its potential speed benefits, and that neither of us had tested it in swell or surf (NB: this is me comparing notes with a world-class iron woman – which would be like me comparing my low-grade suburban rugby career with that of Wallabies captain Rocky Elsom). 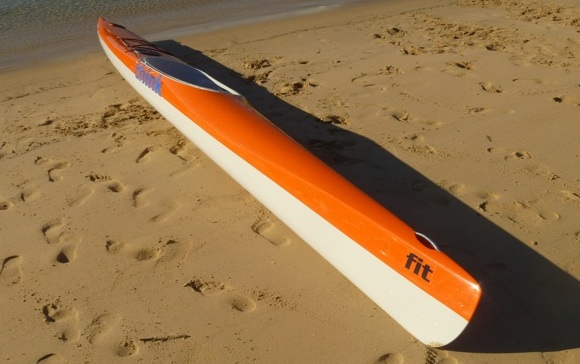 There’s no such thing as tippy boats, just tippy paddlers!

I’ll reserve my judgement on the Think Fit until the lads at Think can arrange an open ocean demo at some stage – it’ll be good to have the help around when I need to get back into it! There’s a lot to like – speed, lightness, good looks, but I think I’ve got that already… with my Epic V8, that is. 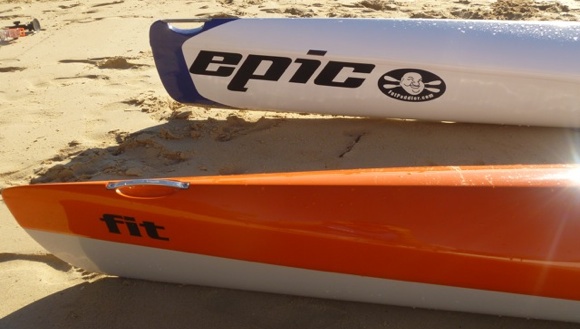 Two very nice beginner boats… now which one to choose??

Of course, if you’ve never been in a ski before and are keen to join the ever growing legion, give both boats a try – one thing is for certain: when you’re done, you’ll buy one of them!

UPDATE (FP – 29 July 2012): There’s now a few more entrant level surfskis in the market worth checking out, including the Think EZE, the Carbonology Zest, the Stellar SR and the interesting cross-over surfski the Stellar S18S. 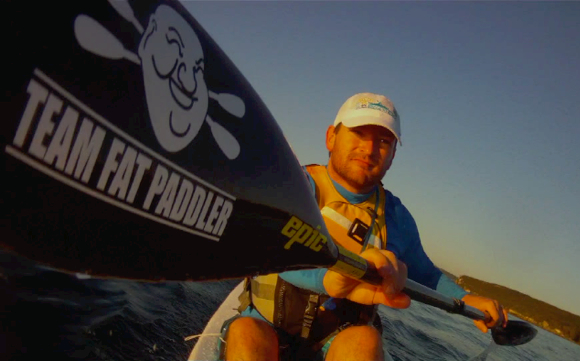 [FPs Note: A warm thanks to Nat for penning this opinion piece on these entrant boats for the growing sport of ocean skis. And I’d like to especially thank him for that entertaining impersonation of a submarine – haha!]